Hinds personify a certain kind of joy: the kind that you feel when lying in the sunshine or sitting around a campfire with your best friends. Their music has always just oozed this giddy excitement and irresistible warmth and their new album, The Prettiest Curse, is no exception.

Hinds are, in essence, a live band – their gigs are infectiously fun, each song delivered with seemingly boundless enthusiasm and often complete with synchronised dance moves. This record showcases the Spanish foursome in all their vibrant glory.
The band clearly mean business with The Prettiest Curse. Opening with ‘Good Bad Times’, arguably one of the band’s finest singles to date, this album is packed top to toe with catchy indie-pop. However, it doesn’t take much to realise that, once again, Hinds have created something much more than just a pleasant pop record.

You just need to listen to a couple of tracks for Hinds’ cheeky, no-nonsense attitude to hit you square in the face. ‘Just Like Kids (Miau)’ acts as a big “Fuck You” to the sexist men that the all-female quartet have encountered during their career and contains some of the band’s best lyricism yet. The lines “You’re too pink to be admired And to punk to be desired” astutely capture the intense criticism and age-old hypocrisy of the music industry and, in fact, society as a whole. 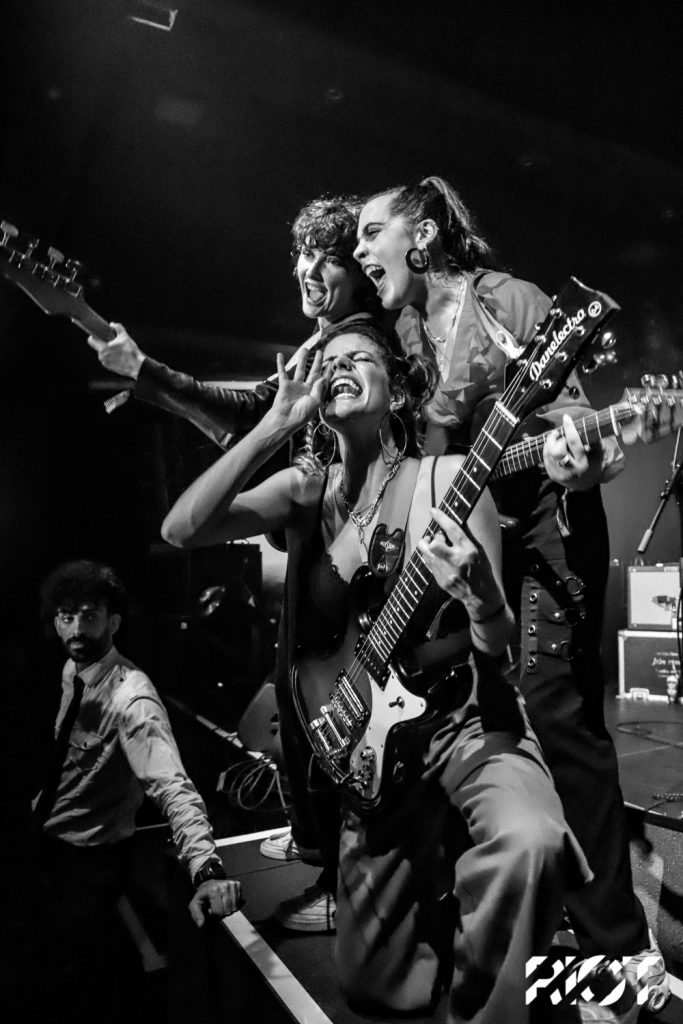 There are also more subtle flavours of feminism throughout the rest of The Prettiest Curse, such as the album’s opening lines, “It’s a good day/ With my pretty boy on my arm”, which cleverly inverts the listener’s expectations about the relationship between men and women, and Boy’s insistent hook, “All I want is my boy”, which conveys the kind of assertiveness that every member of the band possesses.

Returning to their Spanish roots in both their lyricism and instrumentals, this record marks a shift in Hinds’ trajectory. While their previous two albums were decidedly rough-around-the-edges, The Prettiest Curse sees the use of clearer guitar tones and less of the Julian Casablancas-esque vocal distortion. Hinds have always known how to write songs that will whip up a frenzy in a live setting, but this LP proves that they can also make just as much of an impact in the studio. Nearly every track is characteristically anthemic and riotous, with surging choruses and driving guitar solos, but there are also softer, more intimate moments woven into the noisy fabric of The Prettiest Curse. ‘Come Back and Love Me’, with its Spanish guitar and candid lyrics, sits sweetly in the middle of the album like a refreshing breather. It displays a more paired back, mature side to Hinds that the last two albums, Leave Me Alone and I Don’t Run, perhaps didn’t offer.

Despite the fact that all four of the previously released singles arrive in the first half of the album, not much momentum is lost thereafter. ‘Burn’ acts like a face-full of cold water after the laidback Come Back and Love Me, grabbing the listener by the shoulders and brazenly demanding “are you still listening?”, while Take Me Back is a flurry of screaming guitar solos. Closing with the poignant and nostalgic This Moment Forever, Hinds neatly bring the album full circle and reflect on the same “good times” mentioned at the beginning of the record, but with increased wisdom and contemplation.

The Prettiest Curse could well be Hinds’ finest album yet. It is unmistakably and unashamedly them, yet they have managed to find a balance between their past and future selves: the trademark fuzzy, carefree sound of their first two LPs and the more produced, deliberate direction in which they are clearly headed. If there’s one thing that this album has confirmed, it’s that Hinds really are a force to be reckoned with.

The Prettiest Curse is released on Friday, June 5th, via Lucky Number and is available to pre-order now. For more album reviews head over here.