In the space of approximately two years, Sports Team have risen from a relatively unknown indie 6-piece to one of the most talked-about bands around. They have been catapulted onto the airwaves of day time Radio One, built up an enormous and fiercely loyal fan base, and sold out multiple major venues (including, last December, the 2000 capacity Kentish Town Forum). Impressive for a band at the height of their career, let alone one who are just now releasing their debut album. 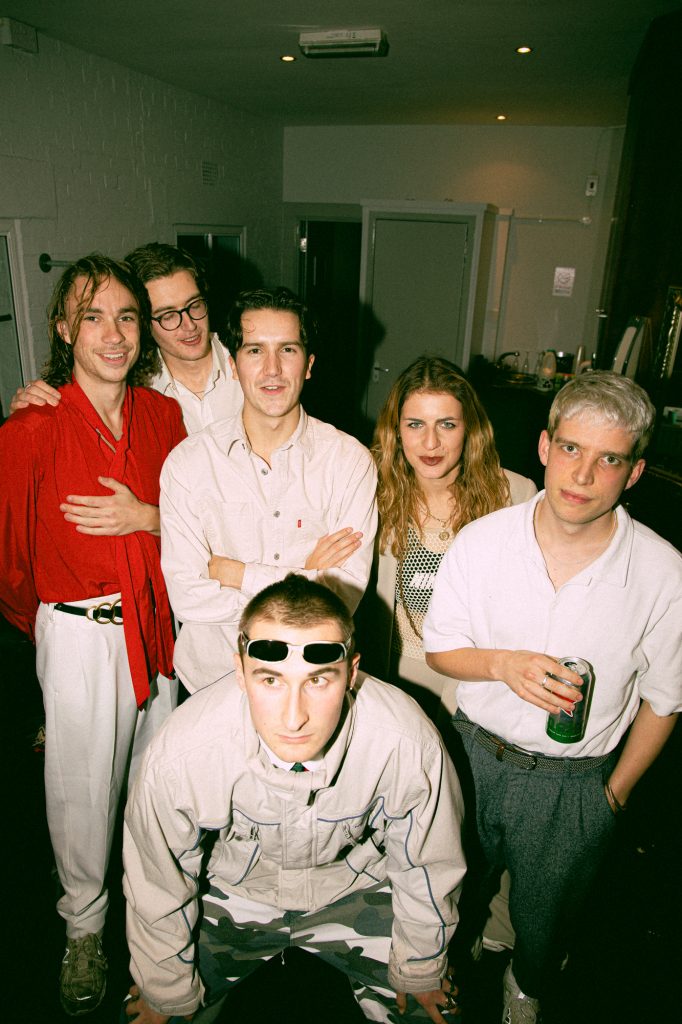 Deep Down Happy has the feel of an album that has battled all odds – because it has. Originally intended for release in early April and pushed back due to the Covid-19 pandemic, this record is now coming out in the midst of intense political and social turmoil. If this were another artist’s debut album, it likely would have faded into insignificance by this point. But Sports Team have nurtured such a dedicated listenership that, even during a global pandemic and a swelling revolution, they can release an album and still expect it to be a success.

Sports Team speak to a particular audience – mostly made up of progressive middle-class teenagers – and the band members are all politically active both within their personal lives and the music they create. Deep Down Happy sees Sports Team live up to their outspoken reputation and brush off any lingering accusations that they are simply a group of privileged Cambridge graduates. Opening with the explosive ‘Lander’, throughout which guitarist Robert Knaggs takes the lead vocals for the first time ever to critique the British elite, this album signals the band’s desire to continue moving forwards, challenging the listener’s expectations of what a Sports Team record should sound like. It’s unusual to see a band switch up its members in this way, but Sports Team have always been known to play the music industry like a game and refuse to stagnate under the meaningless term “guitar music”.

In case ‘Lander’ wasn’t “Sports Team” enough for the casual listener, Deep Down Happy returns to familiar territory by launching into three previously released singles. ‘Here It Comes Again’, released last year, is a wild goose chase of a song. Its faux choruses and false starts keep the crowd on their toes at every gig and you can practically feel the restlessness of a young, sweaty cluster of teenagers through your speakers in Al Greenwood’s unrelenting drumming and Alex Rice’s chaotic vocals. In fact, the whole album contains a refreshingly youthful, couldn’t-care-less feel. Anything else would be to go against Sports Team’s ethos of not taking themselves, or the music scene, too seriously.

‘Going Soft’, one of the last singles to come out before the arrival of the album, is arguably one of the weakest songs on Deep Down Happy. But even on this track, the lyrics are impeccably intelligent and sarcastic: the chorus beautifully mocks the self-obsessed try-hards with which the music industry is saturated (I’ve been sleeping in Thumblands/I only listen to old bands/I pray the CD don’t skip/But it keeps me going soft/Only on the weekend”). 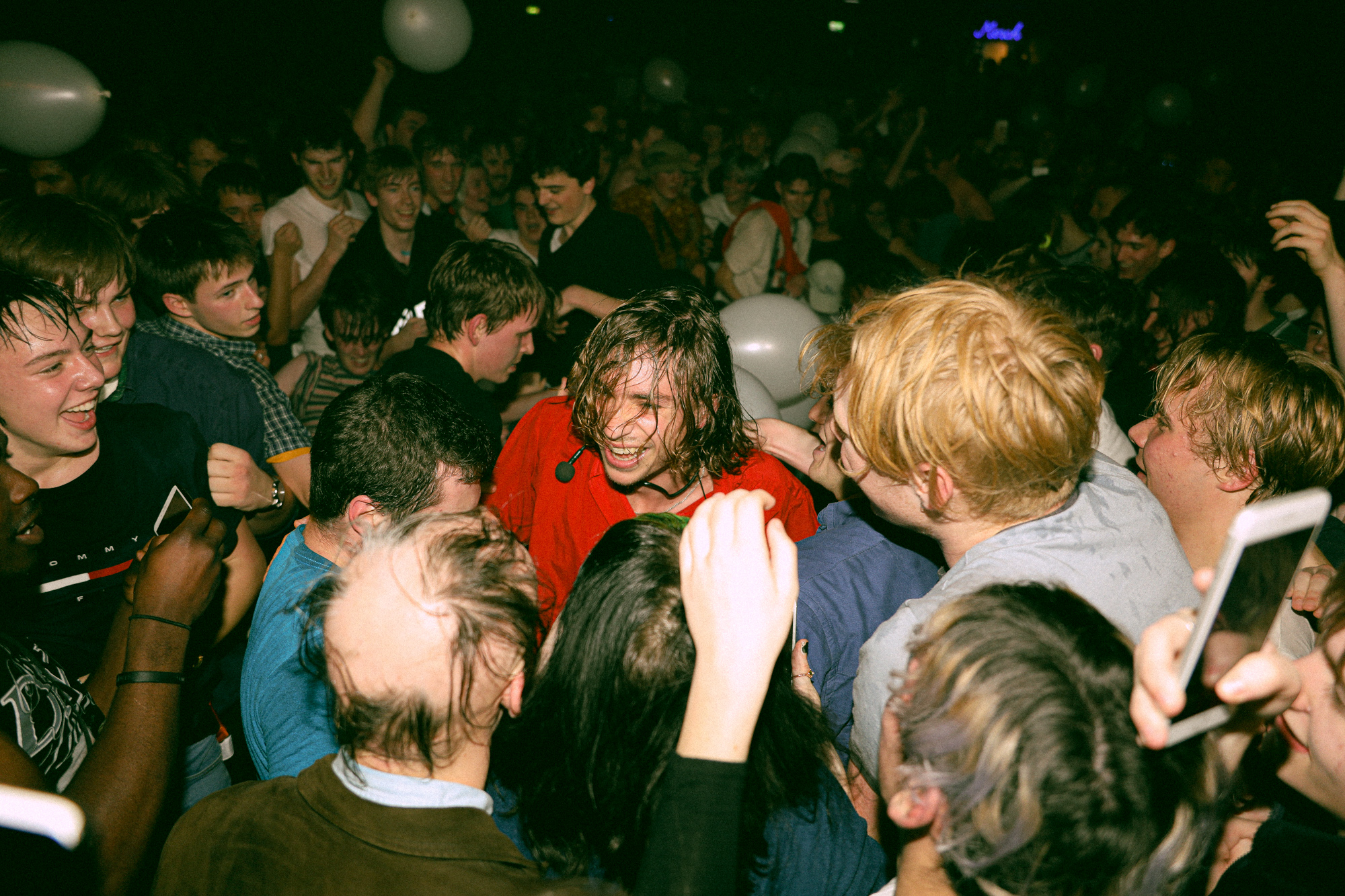 ‘Camel Crew’, a long-time fan favourite, does the same – brutally pointed lyrics poke fun at London band HMLTD (“This avant-garde is still the same/ Go to Goldsmiths and they dye their fringes/ Just to know they’ve made it only/ When they sign the rights to Sony”), as well as the British upper classes. This is the irony of Sports Team, a middle-class band whose frontman once labelled HMLTD the “one of the worst bands ever”, only to be labelled similarly by angry middle-aged men on Twitter. It’s an irony that is lost on many, which is what makes the decision to include older, more outwardly mordant tracks like ‘Camel Crew’ and ‘Kutcher ‘on the album so apt. 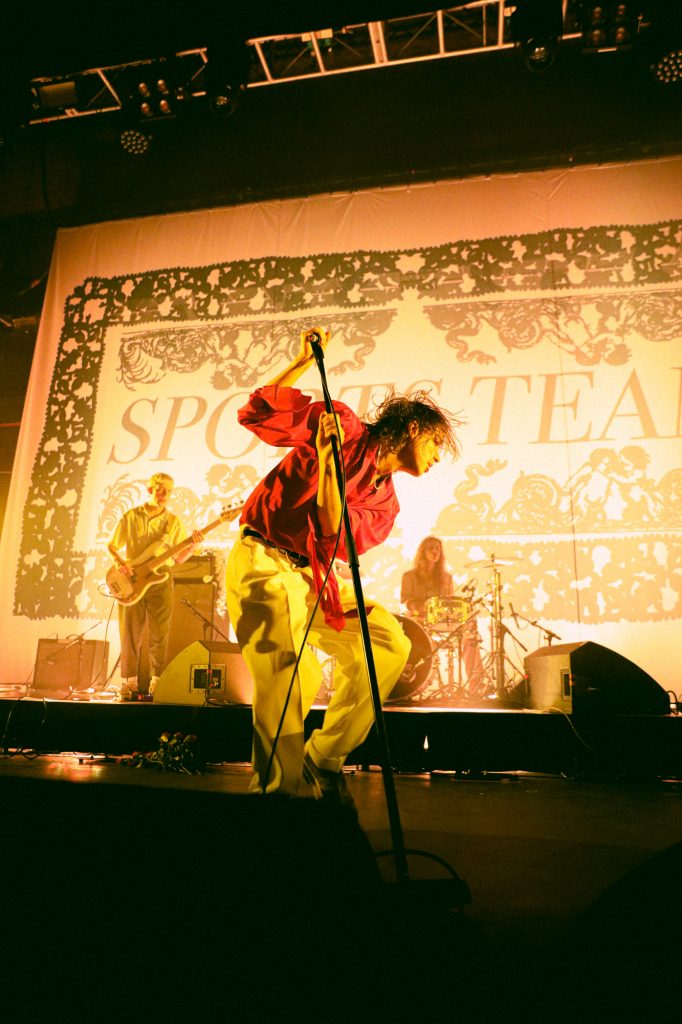 However, the sheer amount of previously released singles on Deep Down Happy has its downsides. Of the 12 tracks, only four are exclusive to the album. Even ‘Long Hot Summer’, a high point on the record, came out as a single just days before Deep Down Happy’s release. Each and every song is undoubtedly great, but there is definitely a danger to impatiently revealing too much of your hand. In this case, the result is an album which feels a tad more like a compilation of some of Sports Team’s best singles than a collection of new, exciting material. Sure, there are clear signs that Sports Team are eager to evolve as a band in Robert’s vocals and the reworking of ‘Camel Crew’, but does Deep Down Happy really show the band to be moving forward?

Despite this, Sports Team have created a time capsule with this album. In the same way that The Strokes’ Is This It transports the listener back to the early noughties indie scene, Deep Down Happy encapsulates the renaissance of “guitar music” (whatever that means) that is taking place in Britain right now. This is a record for Sports Team’s many invested young fans; a record that will forever transport fans back to attending rowdy gigs or making multiple Sports Team meme accounts on Instagram. People will cherish their album bundles and sing along noisily to every savage, satirical lyric that Deep Down Happy has to offer. It seems fitting that a band who have enjoyed such a rapid growth in popularity and have quickly become household names in the UK scene should use their debut album as an opportunity to reflect on their early successes. So, when it boils down to it, does it really matter that the majority of this album has already been heard? Not really.

Sports Team’s Deep Down Happy is released this Friday, June 5th via Island Records and is available to pre-order now. The band will be doing a special Zoom instore gig with Banquet records For more info head over here.