There are two main rules of being a 1975 fan: expect the unexpected and embrace the madness (and genius) of Matt Healy and company.

Coming in at around 80 minutes, the Manchester native’s fourth studio album, Notes On A Conditional Form, is a massive, genre-bending, and at times, disorientating body of work.

If you’ve been following the band for a while, it’s no secret that Notes was supposed to be out months ago. Once upon a time, it was supposed to be a two-part album under the Music For Cars era, but then the album got merged into one. It was announced, singles were released, fans were hyped. Then it got delayed and then delayed again. And again. But finally, the masterpiece has arrived in all its anticipated glory, and it’s wonderful.

Notes On A Conditional Form is daunting and clever. A truly welcome surprise.

The 1975 had a lot of pressure for Notes to succeed. Their third album, A Brief Inquiry into Online Relationships, was critically acclaimed, with tens across the board, turning even their harshest critics into 1975 stans. We even gave the album five stars. They won a Brit award for British album of the year, and the band became known as the defining voice of the generation. The ego boost has gone to the band’s head, though, as Healy told Billboard they are the “definitive band of that whole [last] decade,” and although the band is smug about their talent and ability to understand deep and unnerving complexities of life, they sort of have a right to be — Notes is daunting and clever. But it’s not perfect by any means.

Forget everything you think this album will be, because it’s interesting, to say the least. Although the band released a whopping six singles prior to Notes, there’s so much jampacked into the 22 songs — everything from punk, jazz undertones, Jamaican dancehall influences, and indie-pop anthems. It somehow transcends boundaries, yet still stays true to the band’s electro-indie and punk-rock roots.

The 1975 want you to know that they care about the environment and our messed-up world, but you already knew that. The start of Notes is familiar, with most of the first songs having been previously released. Beginning the album with their self-titled track (as with all their records), which is typically an ambient tune with soft-spoken vocals by Healy, this time Greta Thurnberg gives a moving monologue about climate change against fizzy synth beats. It’s a gentle interlude that tells listeners “it’s time to rebel.” And rebel, indeed. If Thurnberg’s speech wasn’t a wakeup call, Healy creates a riot punk-rock track ‘People.’ It’s in your face like an alarm clock and an actual headbanger, filled with built-up aggression as Healy frets about the future of humanity. But things simmer down again with an orchestral, cinematic track, ‘The End (Music For Cars).’ It’s an odd song to put at the start of the record, as the winding and woke musical journey of Notes has only just begun. 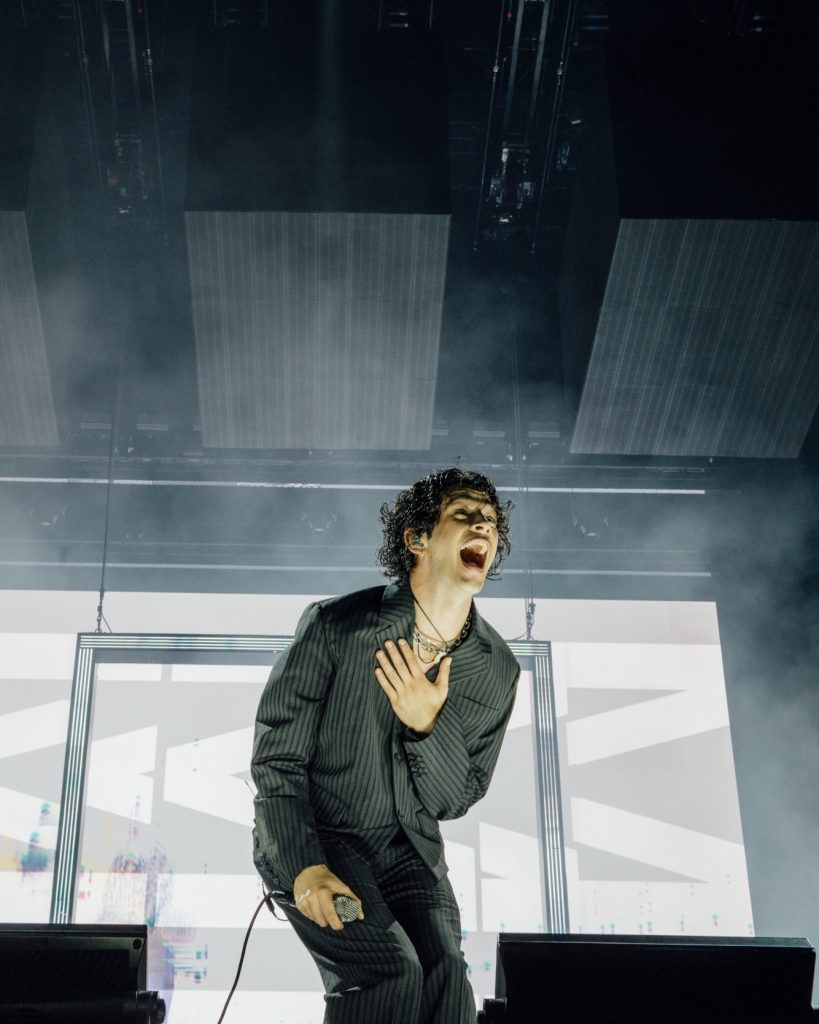 With the exception of ‘People,’ the album starts gently, utilizing low-fi synth beats and instrumental tracks. Catchy yet somber ‘Frail State of Mind’ explores Healy’s social anxiety and overthinking against bubbling synth undertones, opening with the too-relatable lyric, “Go outside? Seems unlikely.” As seen with A Brief Inquiry… the band has a knack for creating classic and timely tunes. Even the aforementioned ‘People’ has an apt lyric amongst its chaos, as Healy screams ‘Well girls, food, gear – I don’t like going outside so bring me everything here!’ on the punk anthem. In out of context quotes from interviews, Healy can seem like an egomaniac, and from time to time he admits it, but Notes shows he’s just an anxious, overthinking musician with a gift of creating angsty, timeless tunes.

In a very un-1975 act, there’s a lot of external collaboration on the record. Up until now (with the exception of ‘TOOTIMETOOTIMETOOTIME’), the music on the albums has always just been the core four: Matthew Healy, George Daniel, Ross MacDonald, and Adam Hann — Manchester’s answer to The Beatles.

But that all changes on Notes. Phoebe Bridgers lends her voice to four songs, shining on the folky, stripped-back track ‘Jesus Christ 2005 God Bless America,’ and the country-pop happy-go-lucky song ‘Roadkill,’ Elsewhere on the record, FKA Twigs introduces two songs, including retro synthpop song ‘If You’re Too Shy (Let Me Know),’ Reggae and Jamaican dancehall musician Cutty Ranks makes an appearance on the disorienting club track ‘Shiny Collarbone,’ whilst Healy’s dad, actor Tim Healy, rounds out the long-list of collabs with a duet on a tender ballad penned to a young Healy, titled ‘Don’t Worry.’

There are quite a few instrumental interludes that probably won’t get any radio airtime, but in true 1975 fashion, there’s plenty of catchy bangers outside of their previously released singles. ‘Then Because She Goes’ is a slick noughties summer-bummer tune that’s somber-toned, but its upbeat rhythms make it deliciously addictive. Meanwhile, ‘I Think There’s Something You Should Know’ blends dubstep with dreamy electro beats with a background noise of drums, chanting, and glitching vocals into something mesmerising. With a simple and repetitive chorus, it’s reminiscent of the quartet’s older work and easy to play on repeat.

The true standouts on the record are two jazz-infused brassy tracks. ‘Nothing Revealed / Everything Denied’ has all the elements of a pop song: slick beats, bright vocals, brief rapping, and a vibrant bassline, but the song turns the go-to formula on its head with the use of jazzy chords and gospel choir. Opening with a bluesy piano riff and chorus, the song is juicy and ripe with emotion and urgency as Healy switches into a rare falsetto and asks, “Is there anybody out there?” In a similar tone, ‘Tonight (I Wish I Was Your Boy)’ is a colourful electro-pop jazz track. There are elements of reggae rhythms in the laid-back synth tune, adding volume to the rumbling beat as Healy mourns the end of a relationship whilst rhyming: “give yourself a new name / change your voice on a train / have a complaint about your fame / tell me that it’s all a rigged game.”

Notes is filled with the kind of music that made you fall in love with the band in the first place. ‘Playing On My Mind’ is the album’s equivalent to their sophomore album’s track, ‘She Lays Down,’ filled with a tender and slow melody that removes autotune and synths in favour of acoustic guitar. In a slight nod to A Brief Inquiry, ‘Having No Head’ is a glitchy futuristic dubstep tune with minimal vocals as the band infuses more nighttime club music into their repertoire.

It’s a journey through space and time, exploring the different identities and sounds under the band’s newest era

Every song has its place, but no two are alike. Although the band introduces different genres and artists, it all sounds cohesive thanks to the constant fizzy and bubbling bassline that threads the songs together. It’s all distinctly The 1975’s sound, even when they’re pushing the boundary. But that’s what makes the album so appealing — it’s a journey through space and time, exploring the different identities and sounds under the band’s newest era.

There’s a lot going on Notes, but the album’s ending holds your hand and lets you know that although the Manchester group is branching out and taking risks, they’re still the soft boys you cry and fan over. There was speculation that this was going to be the end of the band for a while, but the album’s ending track, ‘Guys,’ says otherwise. As Healy fondly recalls the band’s wonder years, he tells the lads, ‘The moment that we started a band was the best thing that ever happened / and I wish that we could do it again.’ And again they shall.

Notes On A Conditional Form is not just an album — it’s an experience, filled with ups and downs as the band try to navigate their newfound sound. The album isn’t flawless by any means. There’s too much autotune and although they’re trying to branch out from their indie-pop sound, it feels like they’re trying too hard to reinvent themselves. Notes is a solid album, but at times it misses the mark with too much fluff and glitchy interludes. The band has never been one to shy away from taking a risk, and Notes is their biggest gamble — and for the most part it has paid off, just not quite as well as they would have wanted.

Notes On A Conditional Form is released 22 May via Dirty Hit and is available for pre-order. Fancy checking out more album reviews? Head over here.

When was the last time you thought about ska subgenres? Yeah, me...