Proudly queer, Kuala Lumpur native alextbh is set on a path to change the highly conservative Malaysian society – where the government outwardly condemns the LGBTQ community – through his music and growing fanbase.

The artist has debuted new single titled ‘Moments’, alongside the announcement of Alex’s debut EP The Chase, set for a June 12th release via Empire.

Displaying his ability to merge modern R&B with subtle pop sensibilities, “Moments’ – which is released today (24th April) – marks the culmination of a breakout year for the rising artist, whose single releases have amassed 40 million+ Spotify streams. Among his achievements, Alex was featured on BBC’s Music Life alongside Yuna and mxmtoon this spring and his previous singles “still mine” “walls,” “no space,” have also landed Alex multiple covers on Spotify Malaysia’s ‘New Music Friday’ playlist.

On the live side, Alex has already shared stages with the likes of Khalid, Sevdaliza, and Jess Connelly, and most recently joined Yuna as direct support on her European tour. He has also played festivals such as Good Vibes Festival in Malaysia, Laneway Festival in Singapore, and Lalala Festival in Indonesia, and will be playing Jakarta’s We The Fest 2020.

In conversation, he delves into how he explores sexuality through music and finally what change he’d like to bring about in the conservative outlook of the Malaysian society.

How would you describe your sound? How has it evolved over time?

In the beginning, I’d throw anything to the wall to see what sticks. When I first got into music production and sound design, I referenced a lot from EDM musicians like Flume and Mura Masa. It also helps that a lot of the tutorials on YouTube are based around their kind of sound. And then ‘Stoop So Low’ came about. I started stripping down my sound and people loved the whole sad boy, late night drive vibes so I stuck to that theme for a while. Of course, I wouldn’t want be sitting here writing about heartbreaks and my past all the time. It’s about time for me to archive that shit and move on to writing about how I actually feel now.

If listeners could take away one message from your music what would you want that to be?

We grow and we learn ..sounds like a WeWork catch line!

How do you explore your sexuality within music? And what change would you like to bring about with your music in the conservative outlook towards the LGBTQ+ community?

It helps that putting music out with complete honesty normalises how I feel about my queerness. I hate saying that this is imperative of the queer experience but when I was younger, I was holding everything back. Coming out still felt like a foreign concept because only famous Internet people do it, but even then they’re not Asian. Anyone I know that’s queer in my community are seen as funny and stereotypically obnoxious. I definitely felt more aligned with myself after writing songs, and when I put them out people tell me they relate to them.

I want people to know that the queer community is a spectrum. Everyone’s doing different things. Not all queer artists do pop music. I think that sort of sentiment gets amplified when you live in a conservative country like Malaysia. So if I can help by shifting people’s perspectives, I’d do it a million times over.

Who would be in your top three for a dream collaboration?

Sinead Harnett, Blood Orange, Ryan Beatty. Talented, brilliant, show stopping, spectacular, completely not ever been done before, unafraid to reference or not reference..

What’s the best part of making new music? What frustrates you about the process?

When the beat, melodies and lyrics come together and I’m like “Yeap we have a bop, girlies!” Of course not all songwriting processes end that way, so it’s sad that some had to end up in the bop cemetery. I do visit that cemetery every now and then though. 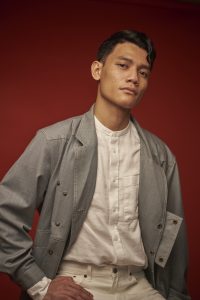 What’s been the most memorable moment of your career so far? What’s next?

Khalid telling me he likes my song ‘Stoop So Low’. It completely validated what I do, because you know.. modern societies thrive off of validation or whatever. But yeah, I can’t wait to get back on the road after we’re done with Ms. Rona. I‘m always ready to go the fuck off.

Who inspires you professionally and personally?

Currently that would be my close friends who are doing drag. They organise parties and events every now and then, and their work ethic inspires me. They get highly meticulous, from the sound design for their performances, down to the amount of time they took to glue their brows on. It’s beautiful.

What’s one question no one asks you in an interview you wish you were asked?

“Why do you only wear black T-Shirts?” Because I’m a minimalist but on like, a cult level. My bedroom walls are white, I practically own the whole Muji store, I set my phone wallpaper to be all black.. I think I’ve gone overboard to be honest!

This is Big Jeff's World... We Just Live In It

Having been the much-loved face of Bristol’s bustling live music scene for...