For several years now, All Points East has reigned as the unrivalled juggernaut of London’s festival calendar.

Operating as a day festival has allowed the Victoria Park event to curate each day as a separate entity, tailoring the mood and evolving with its clientele throughout the run of shows.

Much like every other corner of the music and events industry; All Points East 2021 has overcome a barrage of Covid-induced hurdles in order to take place this year: from booking overseas performers, to sharing the spotlight with Reading and Leeds Festival over the same weekend.

Compromises aside: this year’s event carried an overriding sense of gratitude and appreciation from 160,000 ticket holders who were unsure, just months ago, whether any festivals would take place in 2021.

Returning to his home of East London, Kano cuts a more worldly figure than the man who helped shape the mid-2000s grime landscape. As his set commences, the first voices heard on the East Stage are those of a 5-piece gospel choir harmonising the refrain from 2019’s ‘SYM’.

This mature, breezily debonair delivery of the suggestion to “suck your mother and die” perfectly illustrates the new role that Kano occupies in the game: still delivering heartfelt messages with as much grit as ever before, only now with an added sense of ingratiating sophistication.

Adorned in a navy blue Gucci tracksuit and backed by a horn and string section – much of Kano’s set operates under the aura of the rapper’s most recent album: 2019’s Mercury-Prize nominated Hoodies All Summer. It’s a fair takeaway that newer tracks from his catalogue – tracks which have comprehensively captivated audiences in Kano’s indoor solo performances – do not hit with the same thump when performed to aloof revellers in Victoria Park’s vast field. The man knows how to keep a set alive though, especially in this corner of the city. Tracks like ‘P’s and Q’s’ resonate with far more immediacy, as the East London boy grips the mic with one hand and uses the other to cleanly punctuate each of his trademark crisp bars. 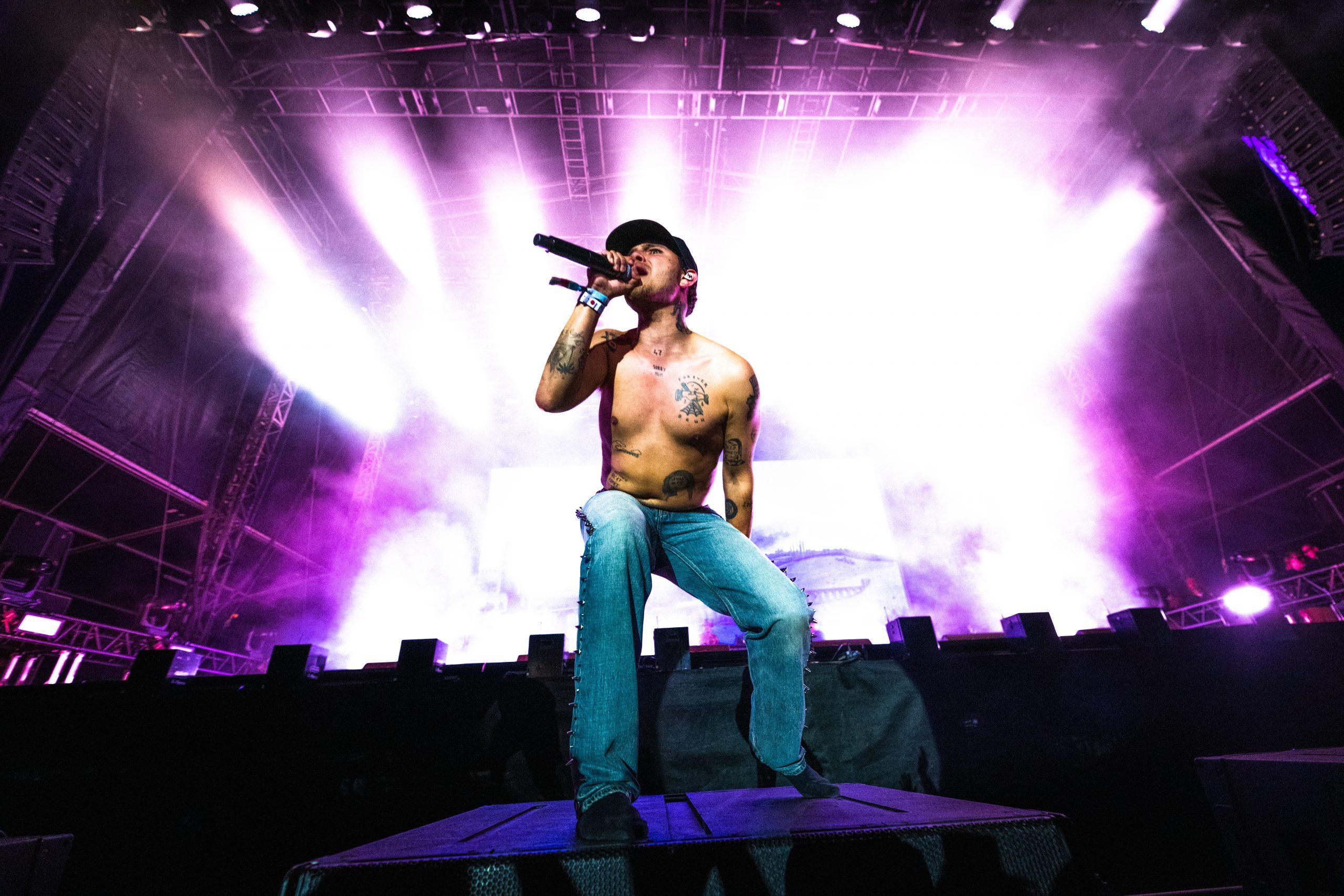 Having just stormed his set at Reading festival, Slowthai was freshly delivered to Victoria Park whilst packing his famous (or infamous?) hyperactive energy, only now with added flamethrowers on stage. “I came straight here from Reading,” Tyrone grins menacingly to the overflowing audience. ‘And now we got fire. I think my eyebrows are gone’.

The release of Slowthai’s second album, 2021’s TYRONE, has cemented his place as the outspoken, punk-toned face of the UK’s invisible youth. Old favourites including ‘Doorman’ were paired with huge new tracks such as his A$AP Rocky collab ‘MAZZA’ and brand new, unreleased cuts (‘Gynaecologist’ in particular receiving a huge reception).

Instigating circle pits and swigging tequila throughout his set, Slowthai has an unrivalled knack of delivering the energy of punk alongside his slurred grime delivery to crowds of any size. Ska-flecked Gorillaz collab ‘Momentary Bliss’ features late in the set, before Northampton’s child leaves the crowd in a haze of sweat and flamethrower fumes.

Tagged with: All points eastKanoslowthai

Following a turbulent 2020 which saw the rapper fall from grace, Slowthai...