BLOXX talk about 2020, band shakeups and their debut album, ‘Lie Out Loud’

In the four years that Bloxx have been together, they have already achieved more than most bands can even dream of. From supporting indie heavyweights such as The Wombats and Two Door Cinema Club around the UK to becoming firm favourites of Radio 1’s Annie Mac and Huw Stephens, the West London four-piece have shot to fame at a rate largely unheard of in today’s alternative scene. Three weeks before the release of Bloxx’s debut album Lie Out Loud, we caught up with frontwoman Fee Booth to discuss growth, identity, and the year that would’ve been.

Talking to Fee, it’s clear that she is taking everything in her stride. She answers my questions with the tone of a seasoned rockstar, rather than that of a singer who is only just releasing her first album – an album which, she tells me, she started writing when Bloxx’s career was actually still in its infancy. ‘It was probably like two years ago now. The first song that I wrote for the record was ‘Swimming’. That was the first session where it was like “Ok, I’m writing album songs now.”’ Bloxx definitely don’t hang around. Having formed in April 2016 and spent a year gigging around their local area, the band played their first tour in 2017 and quickly amassed a dedicated following. Fee approaches songwriting with the same high-speed and tenacious spirit, revealing that she is already working on album two before her band’s debut has even come out. ‘We’ve had [Lie Out Loud] finished for a year, so it’s been a long time coming,’ she explains, before jokingly adding, ‘I’m kind of over it now!’

The story behind Lie Out Loud adds to the feeling that Bloxx are wise beyond their years. ‘The album is the journey of my growth from a young adult to what I feel to be an actual adult,’ Fee tells me. ‘It’s super personal. Even [from when I was 19] to now, I’ve grown up so much. I am a completely different person to who I was.’ While the album’s lyrical content showcases Bloxx at their most mature, the music itself has also become more refined. Each song is filled with infectious hooks and anthemic choruses, marking a deliberate step away from the band’s earlier indie-grunge sound. ‘I definitely wanted it to pay a tribute to some of our older stuff but also be in a more mature world.’ Recalls Fee. ‘I got over writing songs that were purely guitar and I found it fun to write poppier stuff. I didn’t want to do the same thing that we’d already done like ten times. I did a lot of the writing away from the boys and I think a lot of my influences came in from that because I’m the one that listens to the most pop music.’

But Fee emphasises that Lie Out Loud is still very much a collaborative album. ‘There’s still a lot of their influences on the record because I’d bring them songs and they’d take it into their world. I love that about the boys – I love how I can write a song away from them, but it still sounds like us because they put their touch on it.’ Bloxx have embraced their pop side on this album – a sure sign that they are completely confident in their band’s identity. ‘I used to be like “Nah that’s too poppy, we won’t play that,”’ says Fee, ‘but it it’s like, if I like something and the boys like something, we can make it sound good.’ 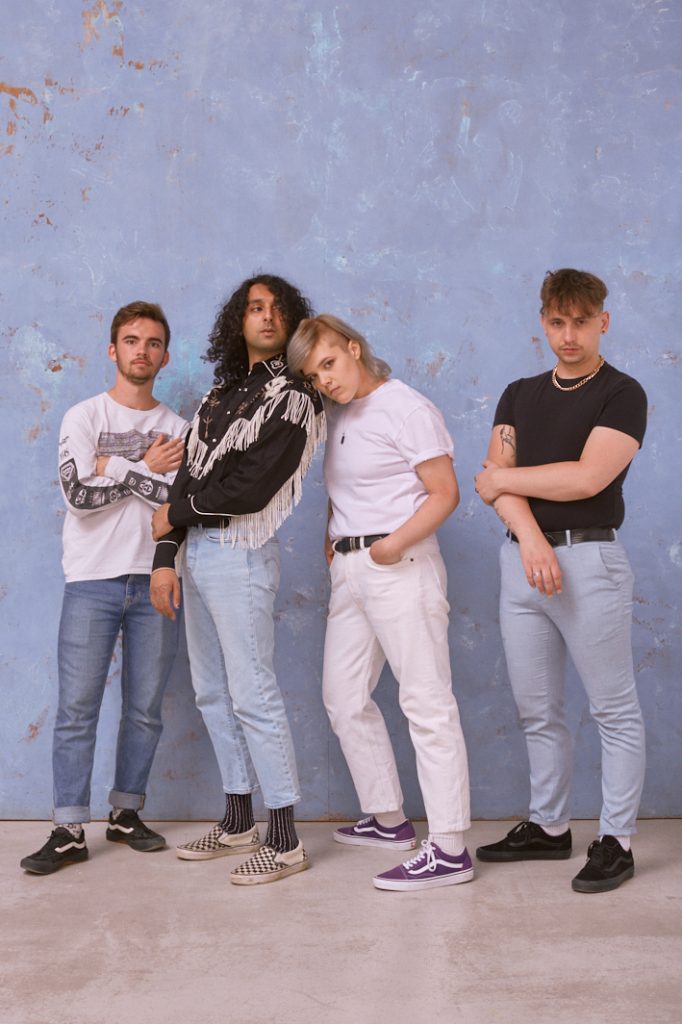 When asked how it has been to support such massive artists over the past three years, Fee is surprisingly nonchalant, expressing her slight regret that Bloxx weren’t more experienced in the early days of their career. ‘Supporting bands like that helped us get to where we are. I just wish that we grew up a little bit before we did that. We’ve all changed so much for the better that I wish we were the people we are now at that point because it would’ve given us more to enjoy and we probably would’ve been a lot better as a band.’ The growing pains that come with being thrust into the limelight so rapidly are noticeable in Fee’s self-doubt. ‘We probably sounded like trash every time we supported these bands, and that keeps me awake at night!’ She tells me. ‘I’m just a stress head and I’ve actually been getting midnight calls from my manager being like, “Fee, calm down. It’s OK, your album’s going to do well, shut up.”

Bloxx underwent a lineup change at the end of last year, with drummer Mozwin leaving the band. The situation initially worried the other three members, says Fee. ‘Mozwin was our mate and it hit [us] hard. At first, we were like, “Oh my god we’re going to break up, is this going to work?”’ But, never ones to lose sight of their mission to become one of the world’s biggest bands, Bloxx pushed on forwards. ‘We had some auditions and met Joe. It’s the best thing that could’ve happened for us; he has reinvigorated the lineup.’ The audition process was surreal for the trio, who had received dozens of online applications before shortlisting ten drummers. ‘I’ve never had to hold an audition before,’ laughs Fee. ‘All three of us were sat in the room like “What the fuck are we doing?” and people were walking in and doing five minutes of drumming. When Joe finished, we all said to each other, “He’s the best one we’ve seen, right?” and it just worked out. It’s almost like he’s been in the band for three years.’

With their debut album ready to go, a new drummer joining the ranks, and some major festival slots in place for this summer, 2020 was originally looking to be a huge year for Bloxx. However, the cancellation of Reading and Leeds meant that the quartet were robbed of the chance to perform on the festival’s main stage. ‘Yeah, I’m still crying about that,’ says Fee. ‘It’s the worst possible time for any band to release a debut album. Main stage Reading and Leeds a week before the album is supposed to be released! It’s almost like the world did this on purpose.’ The Covid-19 pandemic has forced Bloxx to press pause on their ascent to indie stardom, something that is highly frustrating for such a driven band. ‘[We] were sat there like, “This was supposed to be our year!”’ recalls Fee. ‘We used to have this thing with our manager every new year where he’d be like, “2018 is the year of Bloxx!” and then the next new year he’d be like, “2019 is the year of Bloxx!” and then like, “2020 is our year!” and I was like, “Well… It’s not.”’

But, if Fee’s attitude is one of grim realism, perhaps her manager isn’t completely wrong. Each of the past three years has seen Bloxx grow, both in confidence and popularity, and even the unprecedented challenges thrown at them this year can’t stop their boundless ambition. ‘I want to get back on the road.’ Says Fee. ‘I’m hoping to God that we get a top twenty album. If we get a Top 40 then I can live with that. That’s where I want to be in a year: somewhere where the album has touched people and where we can say, “Oh yeah, Top 40!” That would be the next best thing to playing the main stage at Reading and Leeds.’

BLOXX’s debut album, Lie Out Loud, is out today and available to stream and purchase now.

Tagged with: albumbloxxfeaturedfeatureslie out loud

Dirty Hit signees BLACKSTARKIDS are the musical manifestation of what it means...

JW Francis: "This feels like my first ‘big boy’ record"