Returning to Victoria Park for its second weekend, All Points East once again kicked off another epic three days of music. Bringing along some of the biggest names in indie, APE Presents delivered a spectacular series of concerts, one that already has us pining for next years. So without further ado – here’s what went down at this weekend’s All Points East… 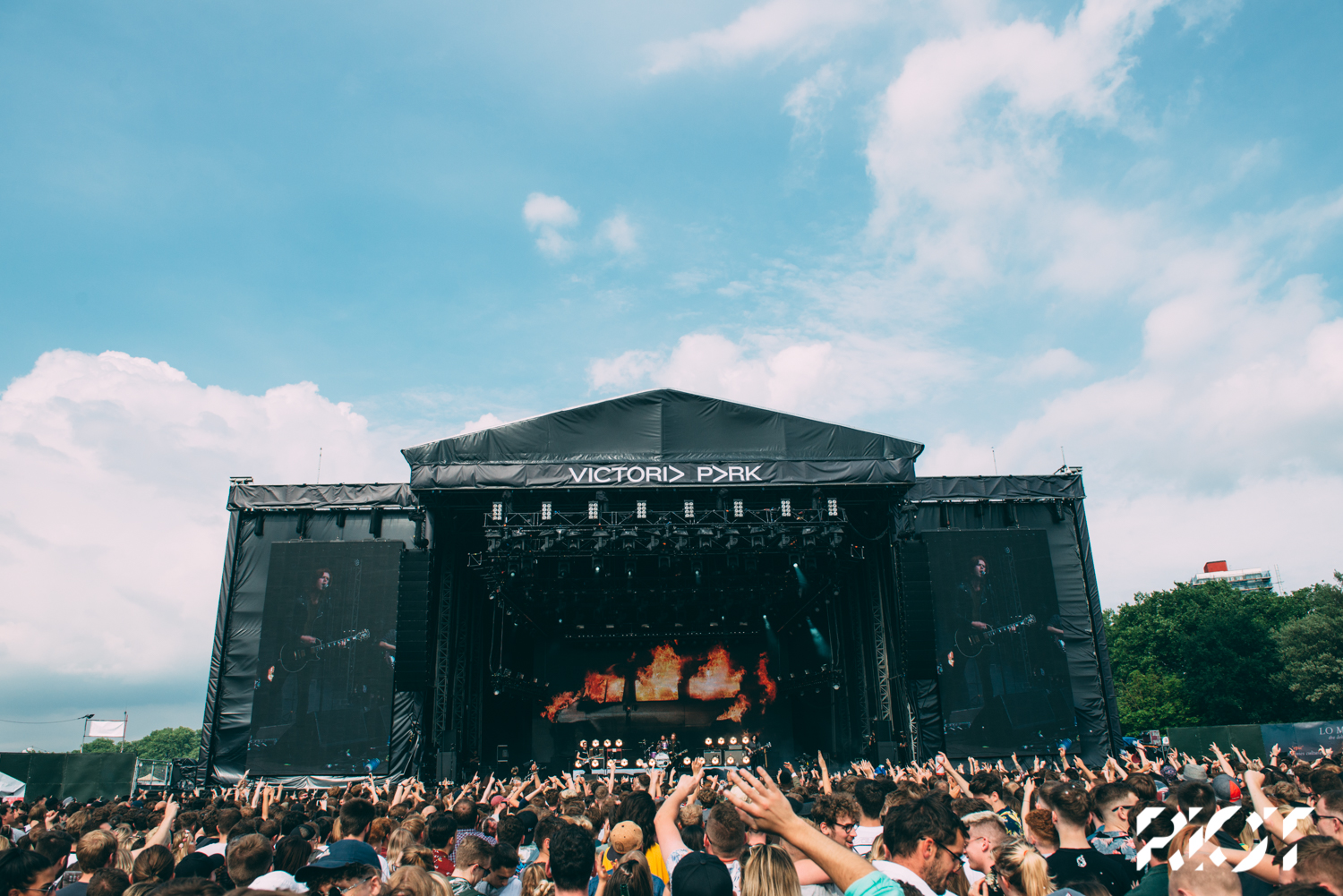 I don’t know what weather God All Points East tipped off, but it clearly was working as we entered the second weekend with yet another round of blistering sunshine.

Of course, as with any British festival, the weather is a top priority when outlining the full experience. However, since no one got trench foot, and all you could really complain about was the potential of a bad sunburn, it really was quite alright.

Since the line up for the first day seemed set on pleasing the indie teens across the nation, Whenyoung rose beyond the occasion as they opened the main stage. Sampling Patti Smith as their walk-on, Whenyoung have already set the intellectual bar for their performance. With their savvy indie pop hooks and fiercely real commentary, the Irish trio made for a powerful start to the day. 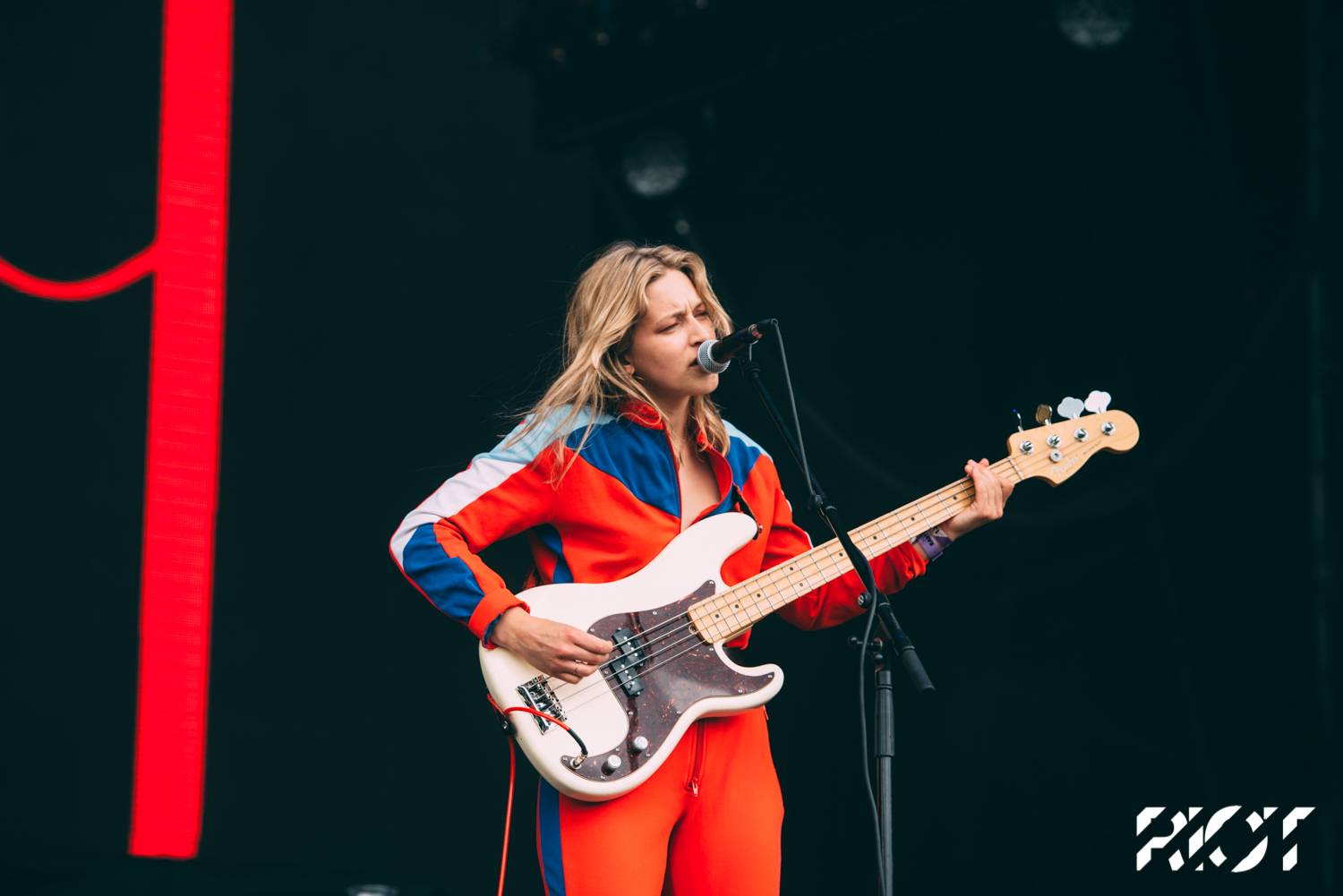 Next up on the main stage are The Magic Gang. Though they may not spread quite as much magic as they potentially could, it’s obvious from the first chord that the guys are giving their best. Despite moments of drifting sound, the sheer excitement far overshadows and little technical slip. “Let’s get this going now Victoria Park. Come on”, the guys shout, encouraging the already ferocious crowd. The sunshine tinged melodies and effervescent guitar work seem to speak to some higher powers as the sun breaks through the mist to join the party.

You can say what you want about The Magic Gang, but when it comes to getting a crowd moving, they know exactly what they’re doing. After all, how often do you see a moshpit in bright sunlight?

Heading over to the Firestone to catch Sea Girls’ marvellously courageous set, the tiny space already seems to be a challenge accepted. The tracing the lines of the British indie tradition, the guitar-driven extravaganza unfolds rapidly before our eyes. Though Sea Girls might feel a bit safe at times, the catchiness and focus of their work makes it worthwhile. 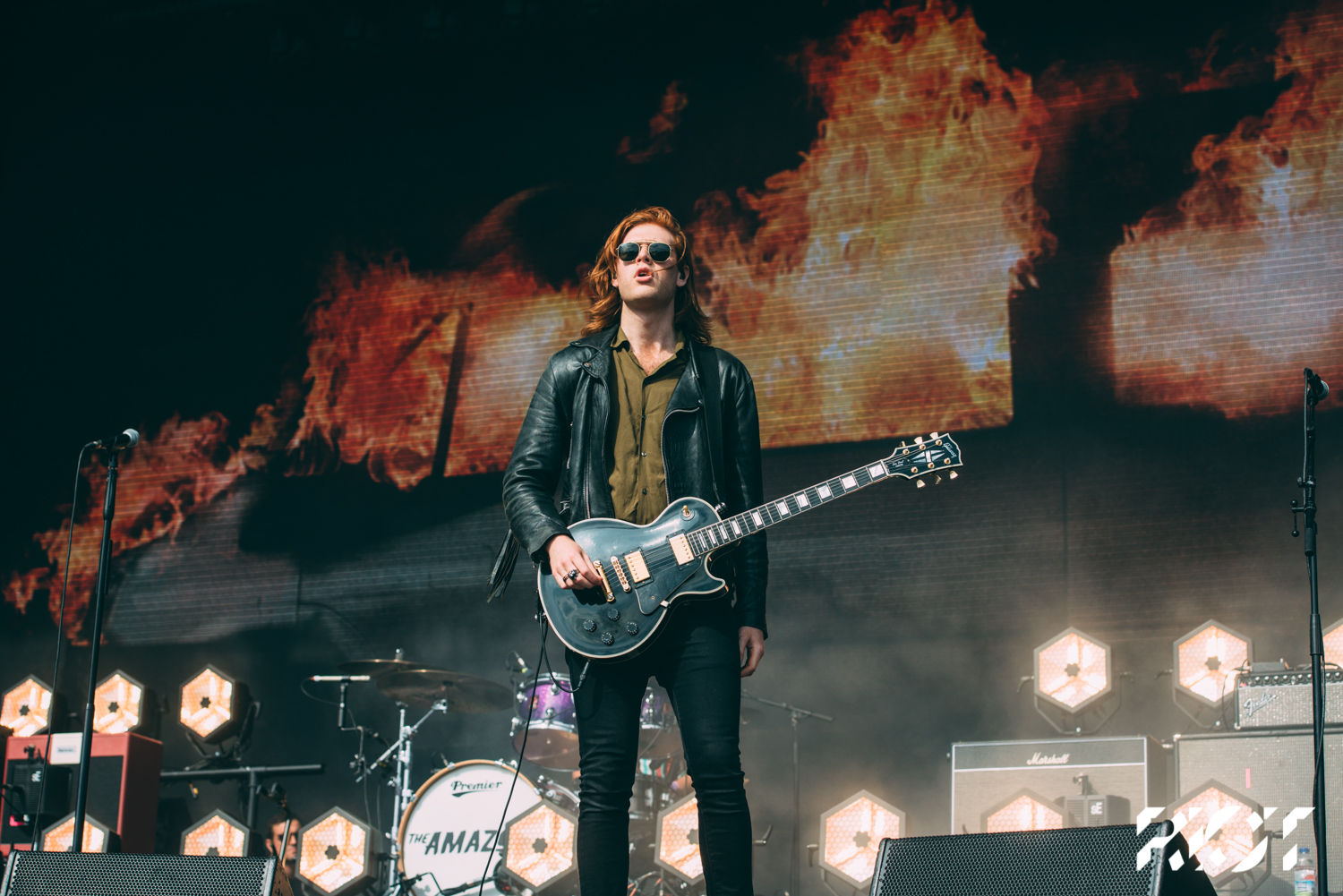 From indie clichés to rock and roll classics. The Amazons bring out the big riffs as they take to the main stage. Their performance seems to slip at times, which sadly ruins the overall impression. However, with elevated choruses and a flair for the melodramatic, the Reading outfit almost hit the nail on the head, almost.

One artist that definitely tick all the boxes is Girli, who with her punchy set proved who’s the real boss. A mixture of razor-sharp one-liners and bubbly fun, Girli brings on a glittering show, all wrapped in a fuchsia aesthetic. With a day staked out as an ode to indie, there are surprisingly few female entries. This also makes Girli’s gender political undertones stand out against the landfill of masculinity. Calling out anyone from fuckboys to bitchy gals, Girli’s ballsy attitude is perhaps her most prolific asset. And as the set ends, we’re already excited to hear more from the lady in pink. 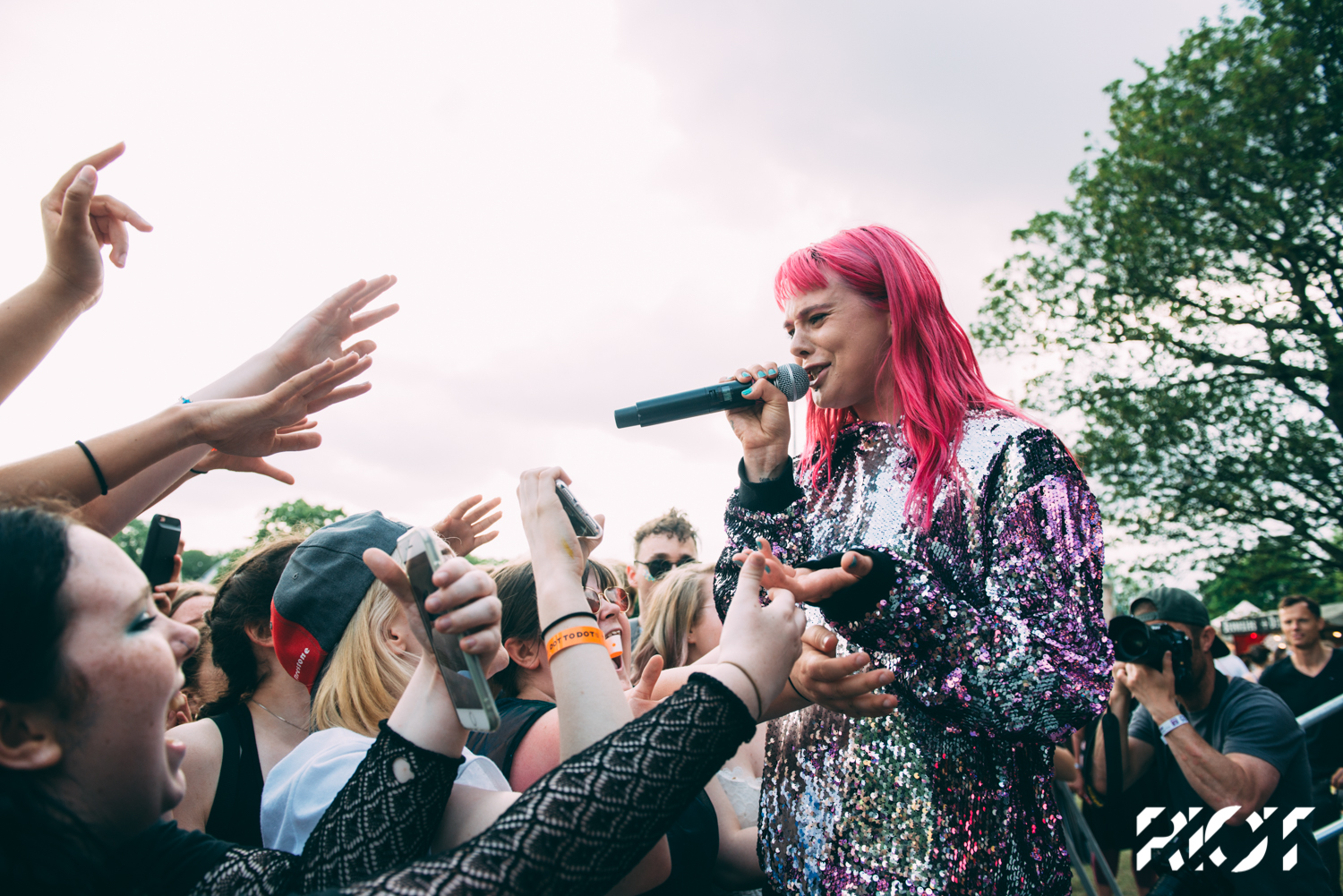 “London my favourite city, are you ready for some fucking rock and roll?”, Frank Carter asks as him and his loyal Rattlesnakes enter the stage. Frolicking in a fur coat, the singer soon throws himself into the usual reckless chaos of pure rock and roll. Whilst his live calibre remains impressive, the running order seems set at this point. They say you can’t teach an old dog new tricks, and whilst Carter’s performance is baffling in its own right, the extraordinary has become a matter of habit it seems.

The day is sealed as Catfish and The Bottlemen unleash a set stacked with indie anthems. Their massive guitar moves and enormous hit factor makes this one for the dancing legends.

After a day of taking the temperature of what British indie currently have on offer, the take away is that, despite rumours, guitar music still isn’t dead. And Catfish’s set is the Alex Turner mic drop to that statement. 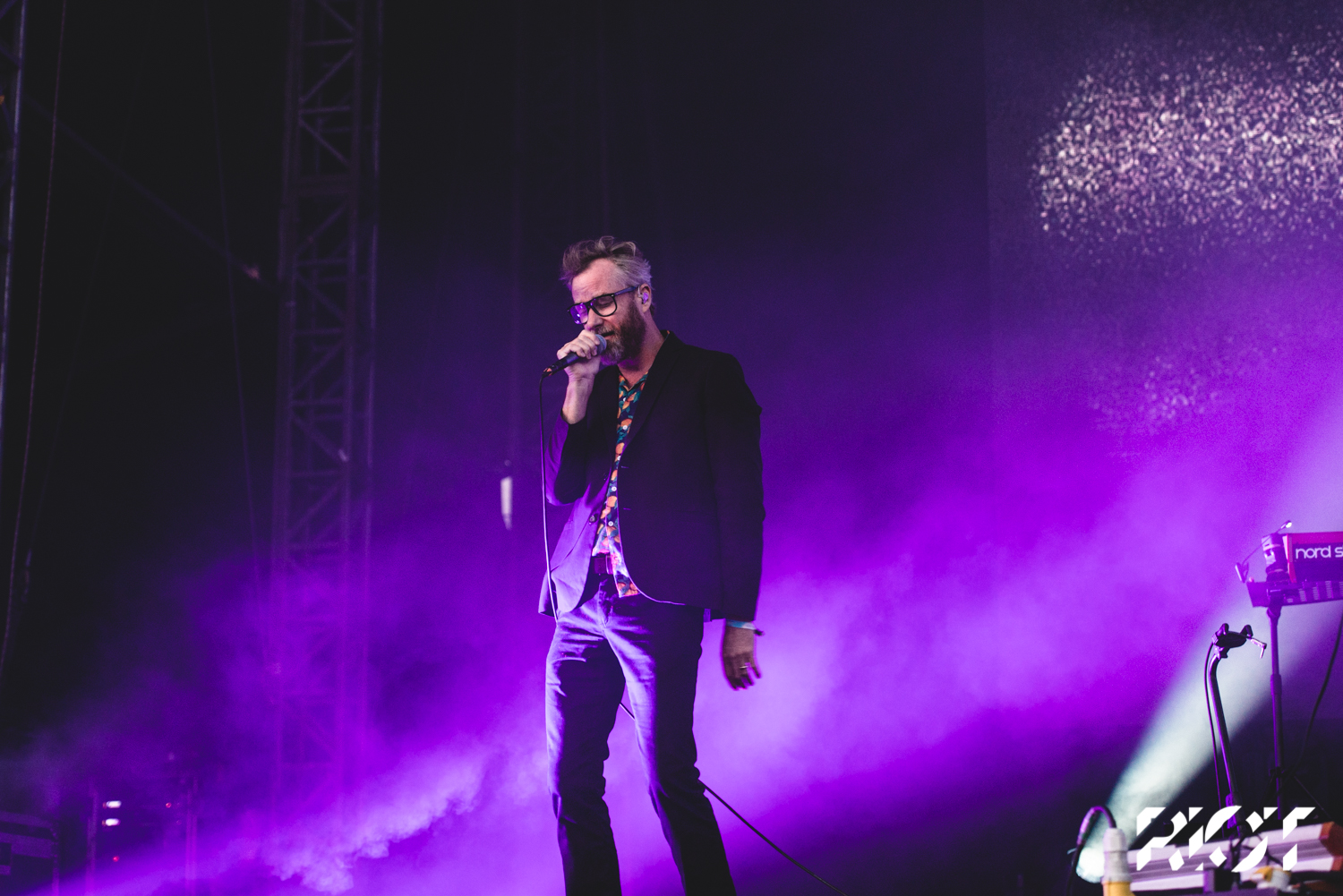 Healing from the indie wave of the day before, day two of APE Presents takes on a different beast. Treading the boards at the once again sun-drenched Victoria Park, Future Islands launch straight into lead singer Samuel T Herring’s signature sway with ‘Run’. Making their way through their hour-long set, it comes off as almost effortless for the band that has spent most of the past two years on the road.

As the last of War On Drugs fades away on the North Stage, it’s finally time for the main event. Having spent the last seventeen years refining their sound, The National could quite easily be a moody teenager in its own right, yet the last three album cycles have seen the New York natives find their footing with ease. Growing from a band playing the relatively-intimate KOKO, to selling out four nights at the Apollo.

Yet as they take on the forty-thousand capacity Victoria Park it’s easy to see what has made this band into such a must-see. The intimacy of songs such as ‘Carin At The Liquor Store’ turning what can be a vast expanse into what feels like a small venue. 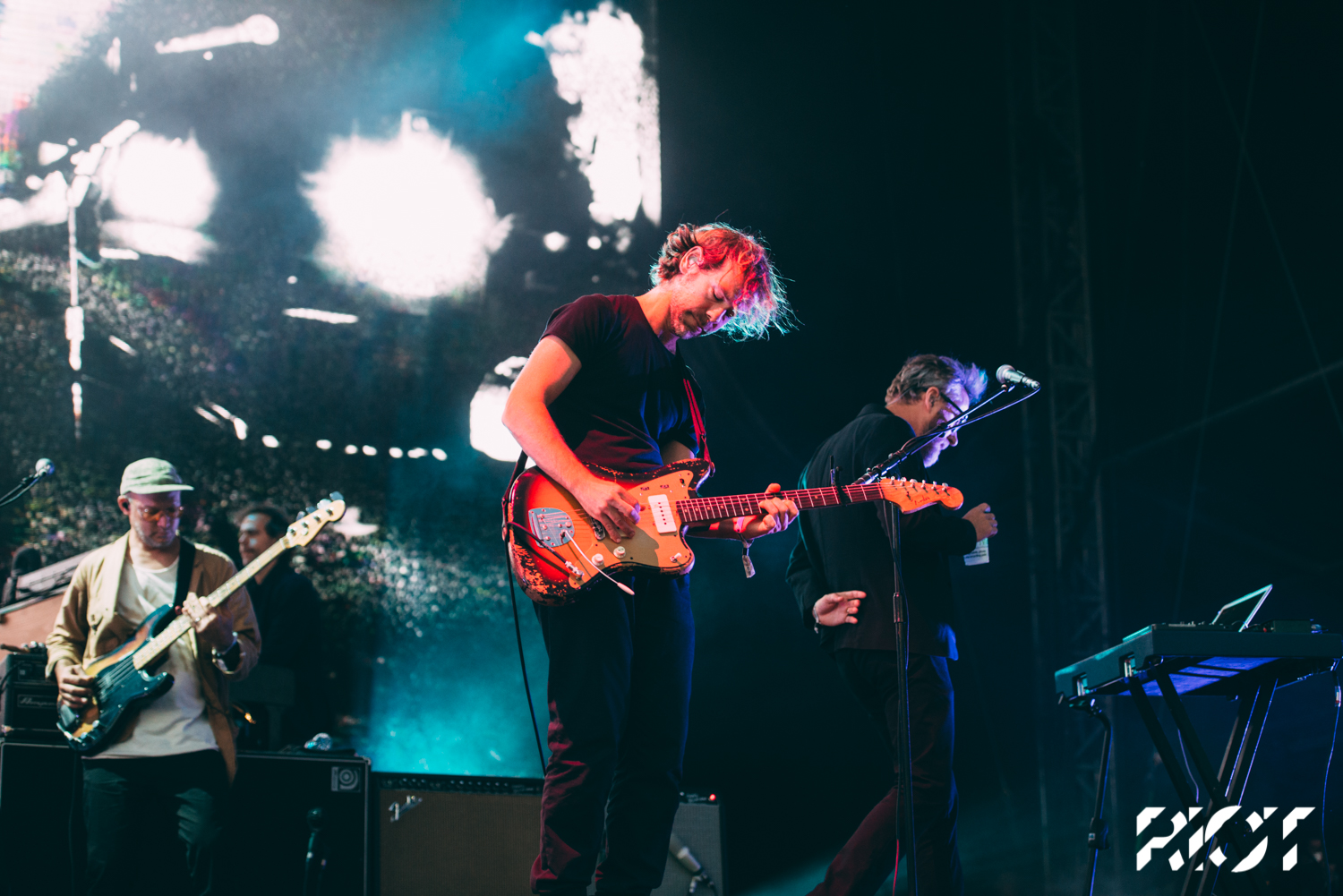 Dedicating ‘About Today’ to the recently departed Scott Hutchinson, all that’s left to do is for the band to sign off with the acoustic “Vanderlyle Crybaby Geeks”. As the spotlights fade, and the last chords of ring out across the park it’s clear The National have, once again, conquered London.

It’s the final festival day, so it may be with a bitter-sweet feeling that we once again queue up to enter Victoria Park.

With the message “London Bridge will not fall down” flashing across the screens, Black Lips have staked out the agenda for the day. With a chaos of sounds, the pirate-esque outfit are off to a bit of a rusty start. The ramshackle set featured some sexy sax and more fruitful staccato, and in the end, the Black Lips did alright. 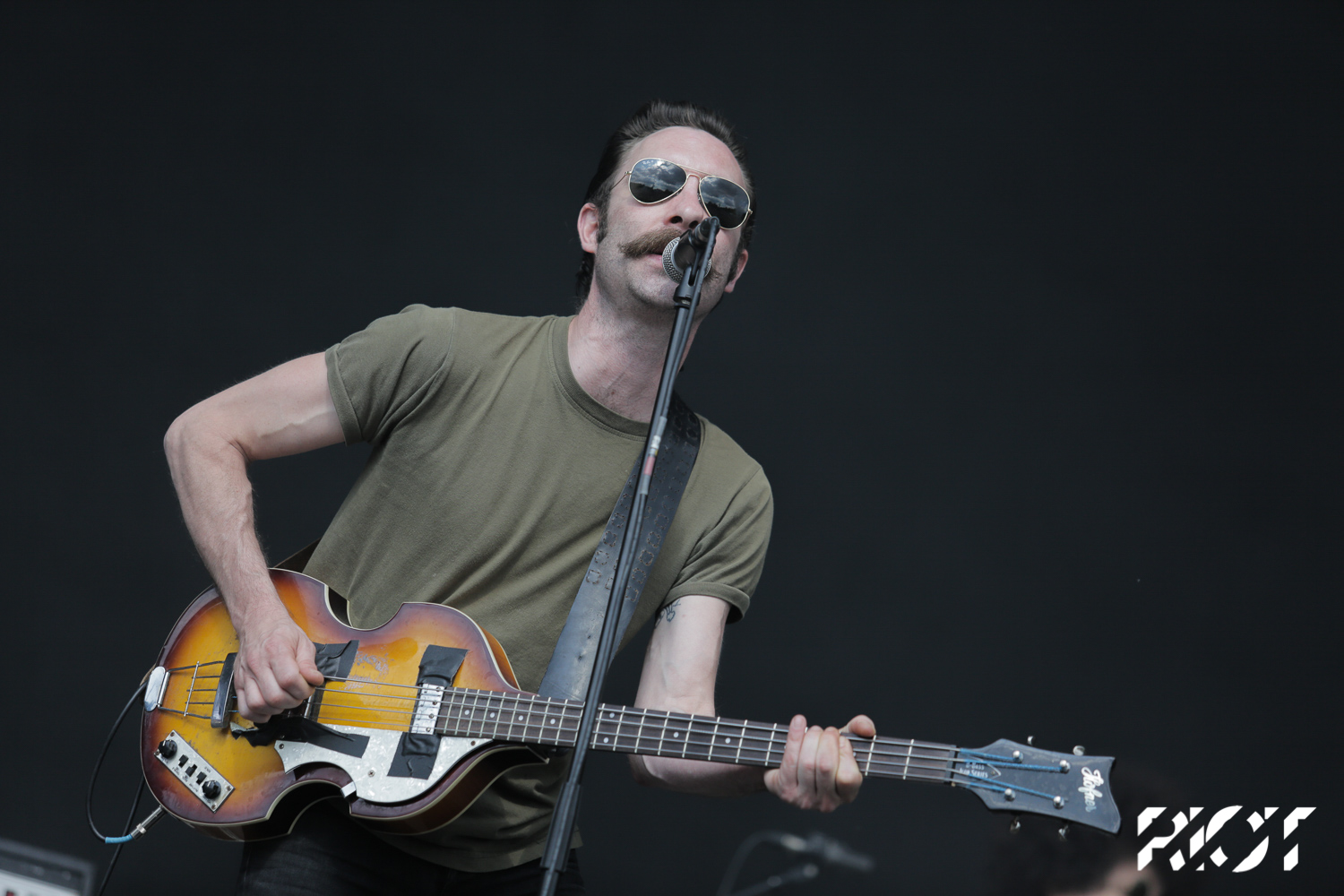 A loft may sound like a hellish place to view a gig from in this heat, yet Jägerhaus somehow elevates the musical experience. Whether it’s from the fumes of the infamous alcohol, or just simply a nice experience, the wooden space seems set on presenting musical class. With the tangible darkness, Lost Under Heaven takes the haus by storm. With slapping percussion and monumental psych vibes, the trio, though a little rough around the edges, leave a steady impression. They may have a way to go, but the potential is definitely there.

The supercool grandads of Psychedelic Furs may have years of experience under their belt, yet the real question is whether or not they can live up to their golden days. Holding a few iconic ‘80s singles, the guys grace the stage with an old fashioned cool. Though a little cringe, it’s worthwhile. They may be a bit off the rails at times, yet the complex soundscape and engaged stage presence makes for an impressive return. ‘Love My Way’ hit a millennial renewal though Call Me By Your Name’s infamous dance scene, and the Furs definitely grace some insta-stories with this one. Closing off with golden oldie ‘Pretty In Pink’ it is clear that despite the rickety road, Psychedelic Furs are still good at the core. 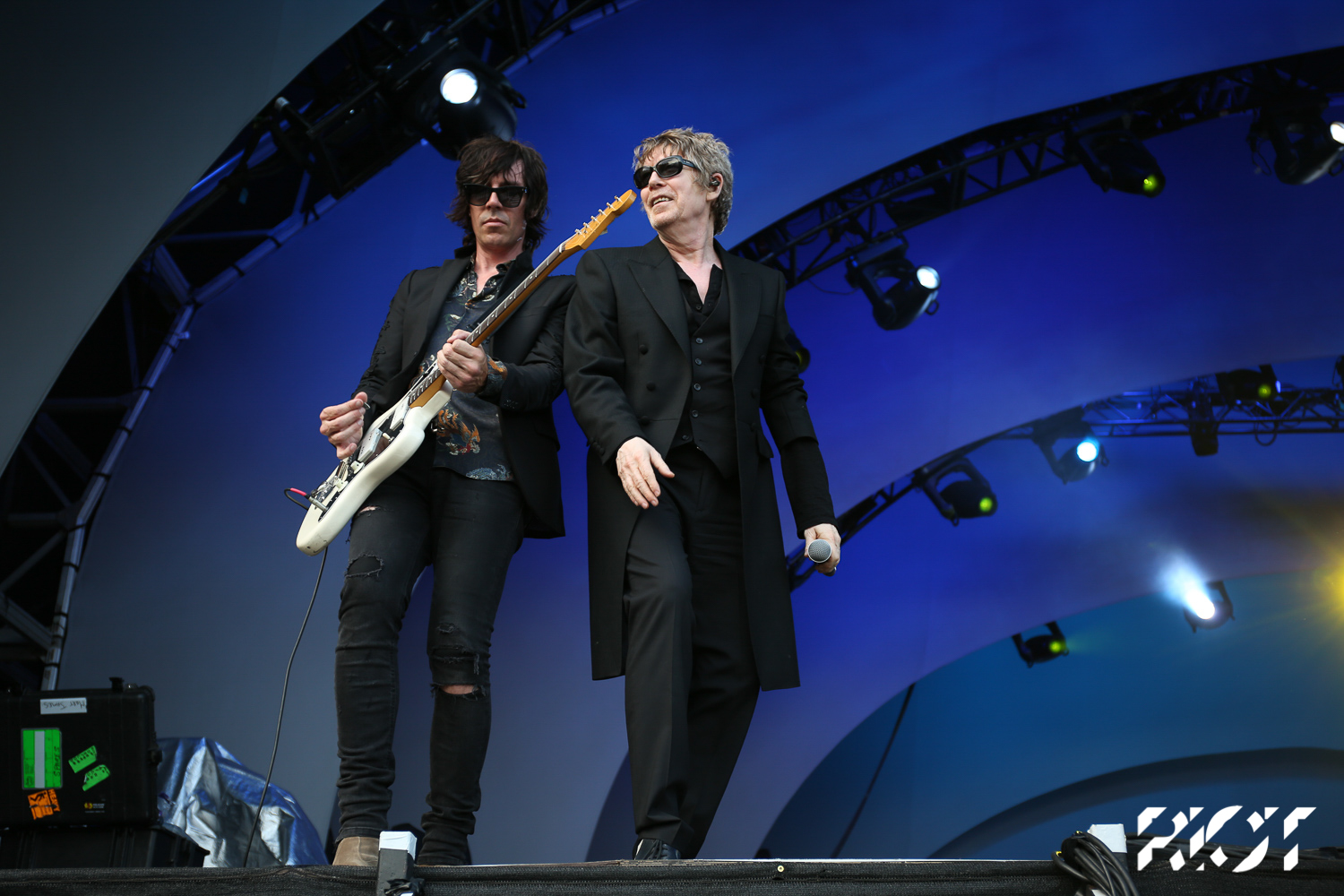 Coming full circle from Whenyoung’s ballsy sample, Patti Smith herself graces the main stage with her immense person and infinite cool. Her performance touches on the roots of humanity, calling out the vile state of politics that pollutes society in the most eloquent way possible.

Though she is in a class of her own, Patti Smith is not the only word-strong lady to grace the line up of the day. All Points East seems to have sharpened up on gender balance, as both Marika Hackman and St Vincent follow, each with their own political subcontext.

Hackman takes to stage in the Jägerhaus just as St Vincent kicks off her set right around the corner. Despite the noise pollution, Hackman charms with her gripping lyrics and shy stage presence.  Her balance between noisy reverb and melodic magic comes with a blooming sense of empowerment. A perfect gateway for the tongue-in-cheek melancholy of Marika Hackman’s sonics. 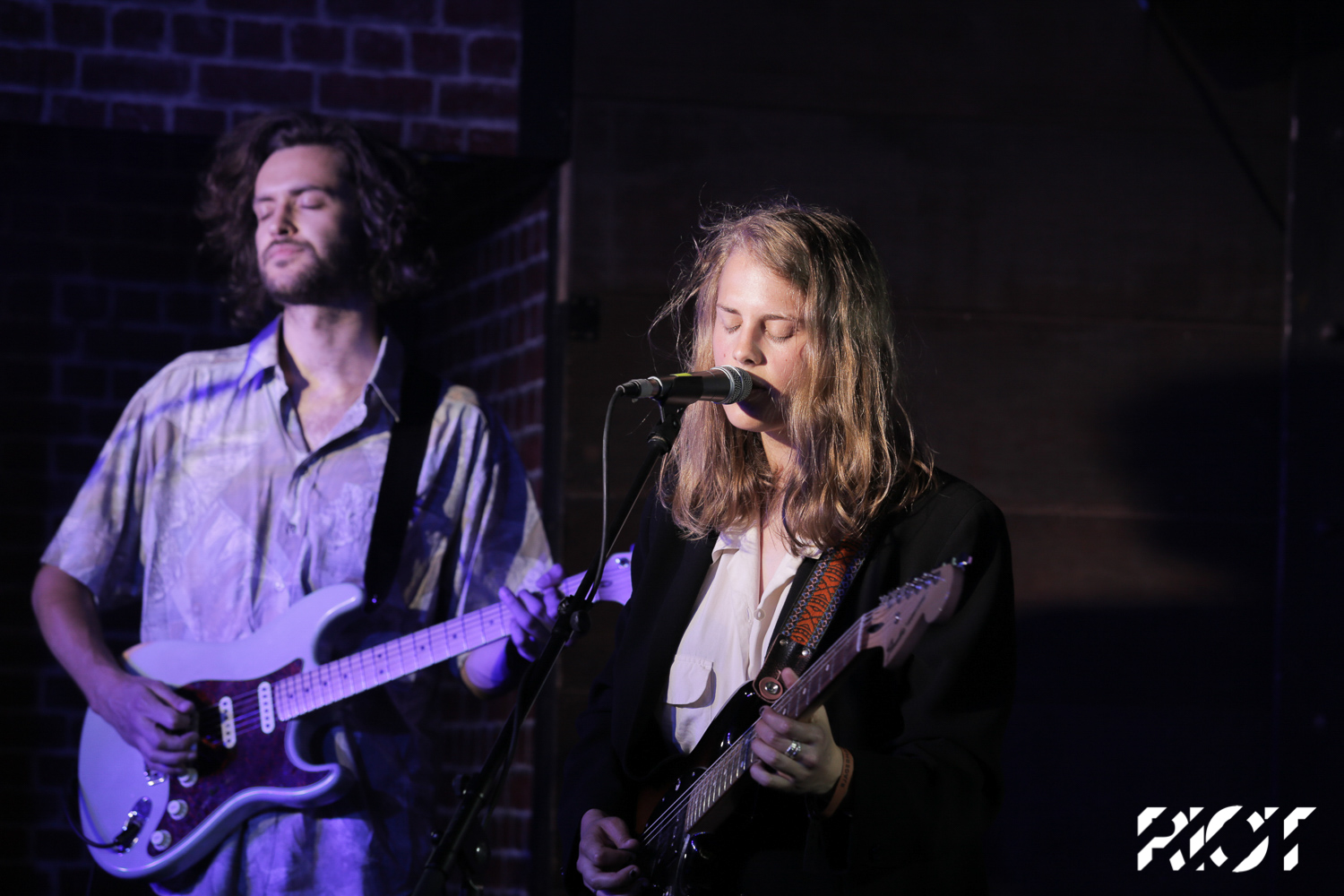 St Vincent, aka Annie Clark, is anything but conventional, and as she closes off the North Stage, she does so in the true fashion of MASSEDUCTION. With a masked band and the stiff doll aesthetic that comes with her latest offering, St Vincent stands before us as a posing provocateur, ready to unmask the grim underbelly of our society. From the drawn-out drama of ‘Cheerleader’ to dreamy finish of ‘Slow Disco’, the saturated pop package is a concept to take on. And St Vincent, of course, executes it marvellously.

As twilight falls, Nick Cave brings on the timelessness of decades of music history wrapped into a phenomenal set. From the gloom, doom and drama, to a romantic rendition of ‘Where the Wild Roses Grow’ featuring Kylie Minogue, Nick Cave knows how to entertain a crowd. 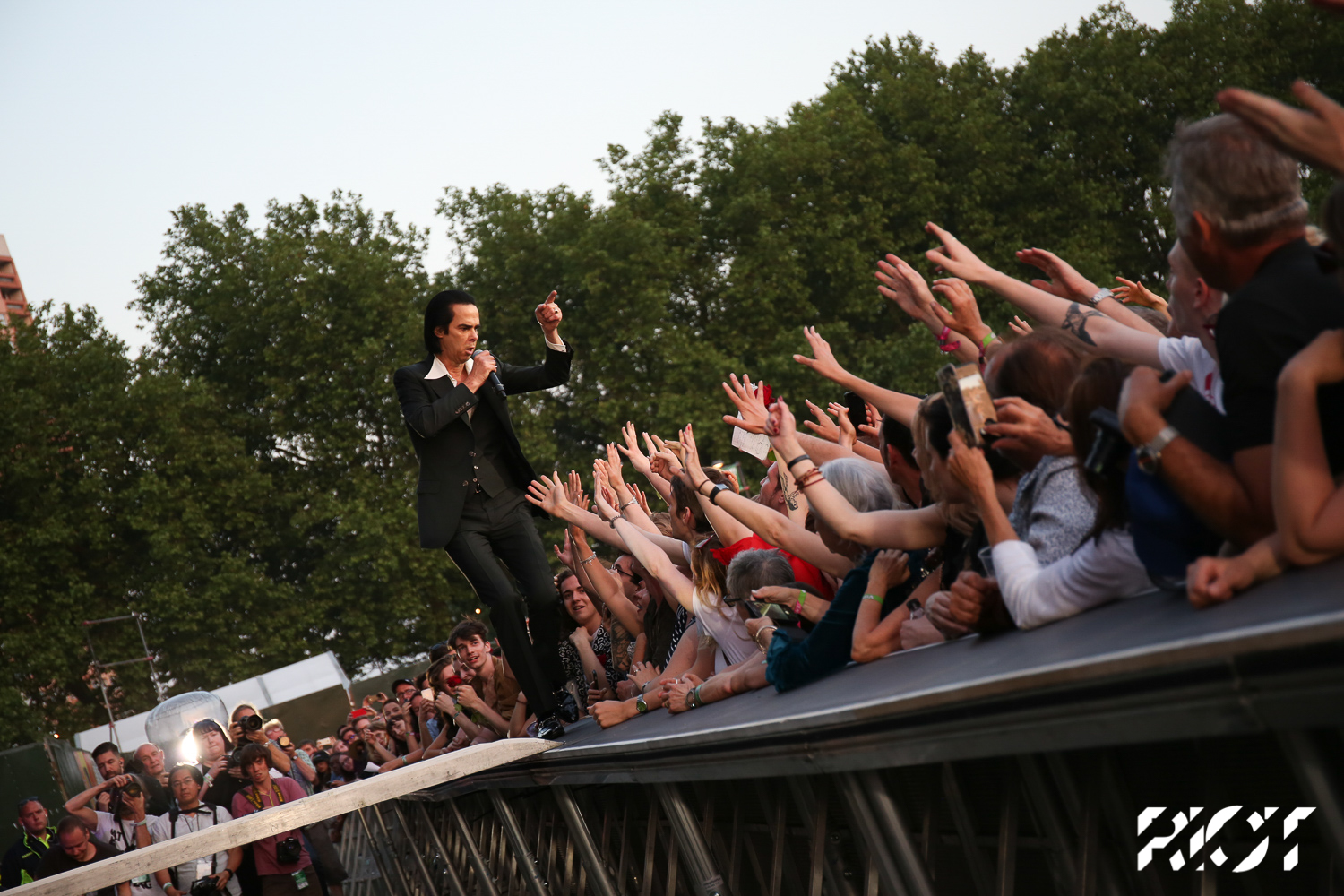 The last eerie tones of ‘Push The Sky Away’ slowly fades out, and with that, All Points East is over for now. Hopefully, see you next year.