Over the course of two decades now, Green Man has grown to become not only a festival which is widely loved by locals, returning devotees and a growing list of newcomers, but an evermore impressive platform for performers who are pushing the conversation forward.

One artist who epitomises the festival’s ambition, in both their thought-provoking lyrical content and position within culture is South London spoken word innovator Kae Tempest. Gracing the Mountain Stage amphitheatre in the early evening, Kae performed pieces from their catalogue with unshakeable heartfelt conviction; cultivating intense intimacy with the huge crowd as the setting sun illuminated the Brecon Beacon in the background.

In recent times, the pre-headline spot over at the Far Out tent has adopted a penchant for showcasing top drawer punk acs, and this year was no exception. Hot on the heels of their acclaimed new album Cave World, Swedish wildcards Viagra Boys (or V****a Boys, as spam filters worldwide prefer) brought a flavour of frenzied oddball adrenaline to the tent. With an unhinged set featuring some textbook denim/leather combos, vodka swigging and a cowboy in a ten-gallon hat shredding on a keytar, very few would argue that Viagra Boys don’t offer value for money

Cola lit the fuse on Saturday’s proceedings, taking to the Far Out stage early to showcase tracks from their recent debut album Deep in View, before Caitlin Moran’s interview with MP Jess Philips drew a gargantuan crowd that any buzzy pop newcomer would be proud of. The first unmistakable showstopper of the day, however, was unquestionably Katy J Pearson‘s set on the Mountain Stage. Drawing a sizeable audience, Katy truly punctuated the atmosphere around the site, as her feel-good Americana permeated the sunny Welsh valley. There was an air of celebration about the performance, as Katy was joined on stage towards the end of the set by Green Man favourite and “Welsh Robbie Williams”, H. Hawkline.

As the night drew in, Glasgow’s Arab Strap went far and beyond in regards to creating a very different type of atmosphere. Moody, post-rock soundscapes were seasoned with electronics throughout a performance which felt timeless in every way. Frontman Aidan Moffat was nothing short of captivating, holding the crowd with a nonchalant, no-nonsense charisma, as 1996 single ‘The First Big Weekend’ made an unlikely bid to be crowned the most memorable moment of the festival.

The day’s proceedings were brought to a close by the affable balladry of Willie J Healey over at The Walled Garden. Healey dipped into his canon of breezy psych-infused songwriting, throwing in one or two teasers from his forthcoming, funk-flavoured new album. 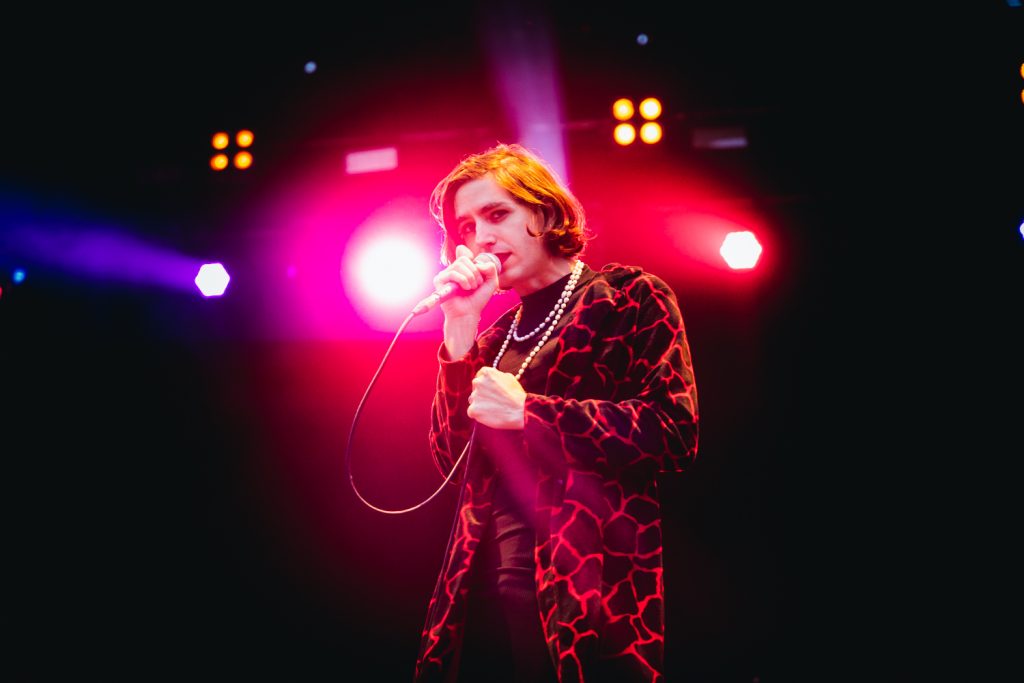 Sunday brought with it a platter of punk delights, with M(h)aol, Grandma’s House (replacing Unschooling in the face of cross-channel travel difficulties) and The Murder Capital all bringing offering a boost of energy to hungover revellers.

If the final day of the festival belonged to one artist, however, it would be Chicagoan songwriter Ezra Furman. Furman took to the Mountain Stage following her conversation earlier in the day with podcaster and Happiness drummer Ash Kenazi, in which Ezra talked about her journey in gender, touring and mental health. Tearing through her lengthy discography, Ezra left everything on the stage; dedicating new song ‘Dressed in Black’ to Ronnie Spector, before performing her trans anthem ‘Forever in Sunset’. Ezra closed her set with a cover of Patti Smith’s ‘Because the Night’, setting the scene for Michael Kiwanuka‘s phenomenal headline set, which saw the largest crowd of the weekend.

One piece of the festival jigsaw that Green Man have thoroughly nailed is the sense of atmosphere and community which is present throughout every corner of the site. Booking a broad range of experimental, exciting and progressive talent is not to be undermined, but – as the 30 foot tall wooden statue of the Green Man is set alight amidst the glow of an emphatic firework display – it’s the festival’s hard-earned identity and tradition which stays with it’s patrons.

Whether you arrive as a family looking for a picturesque getaway, an anorak of leftfield music in search of new favourites, or a group of mates who want to lose themselves for three days; Green Man is a must-visit, staking a serious claim to be one of the very best festivals in the UK.