Parklife has been going for nearly a decade at this point, and in that time, the festival has forged a diverse lineup of tastemaker underground artists, legacy acts and big popstars. Returning in 2018 with a lineup which is no different, the Manchester festival brought one of its biggest, and arguably best lineups to Heaton Park for this year’s edition. Our writer Matteo Pini headed along to capture what went down at Parklife 2018. 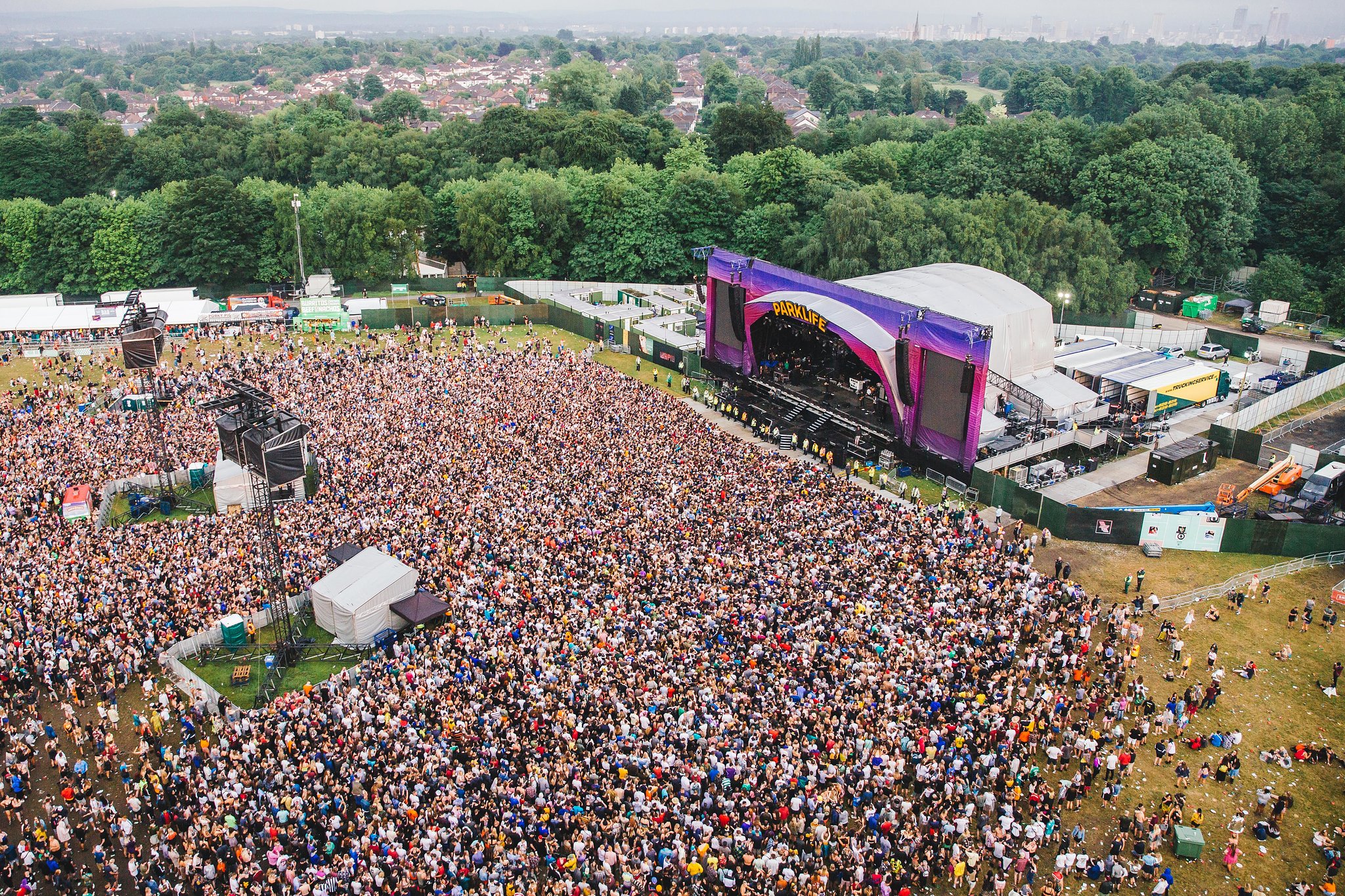 Manchester managed to bless Parklife with blistering sunshine for the first day of the festival. True, this weather was made slightly taxing with long entrance wait times and (understandably, post-Manchester Arena bombings) intense drug searches, yet once we were in, the park seethed with the youthful energy of its 80,000 attendees.

The day started strong with up-and-comer Tom Misch. Despite his label giving him a touring schedule seemingly designed to break the man, he showed no telltale signs of tiredness or apathy, and the crowd went wild over his trad blend of jazz, electronica and MOR balladry. Playing in the Sounds of the Near Future tent, with a space-age psychedelic backdrop, he exuded the ease of a well-rehearsed performer, and the chemistry he had both with his band and his audience was undeniable. The exclusion of his lilting single ‘Movie’ was a personal disappointment, yet he made up for this with ‘Lost in Paris’, a whimsical closer to a strong set. Expect big things from Mr Misch. 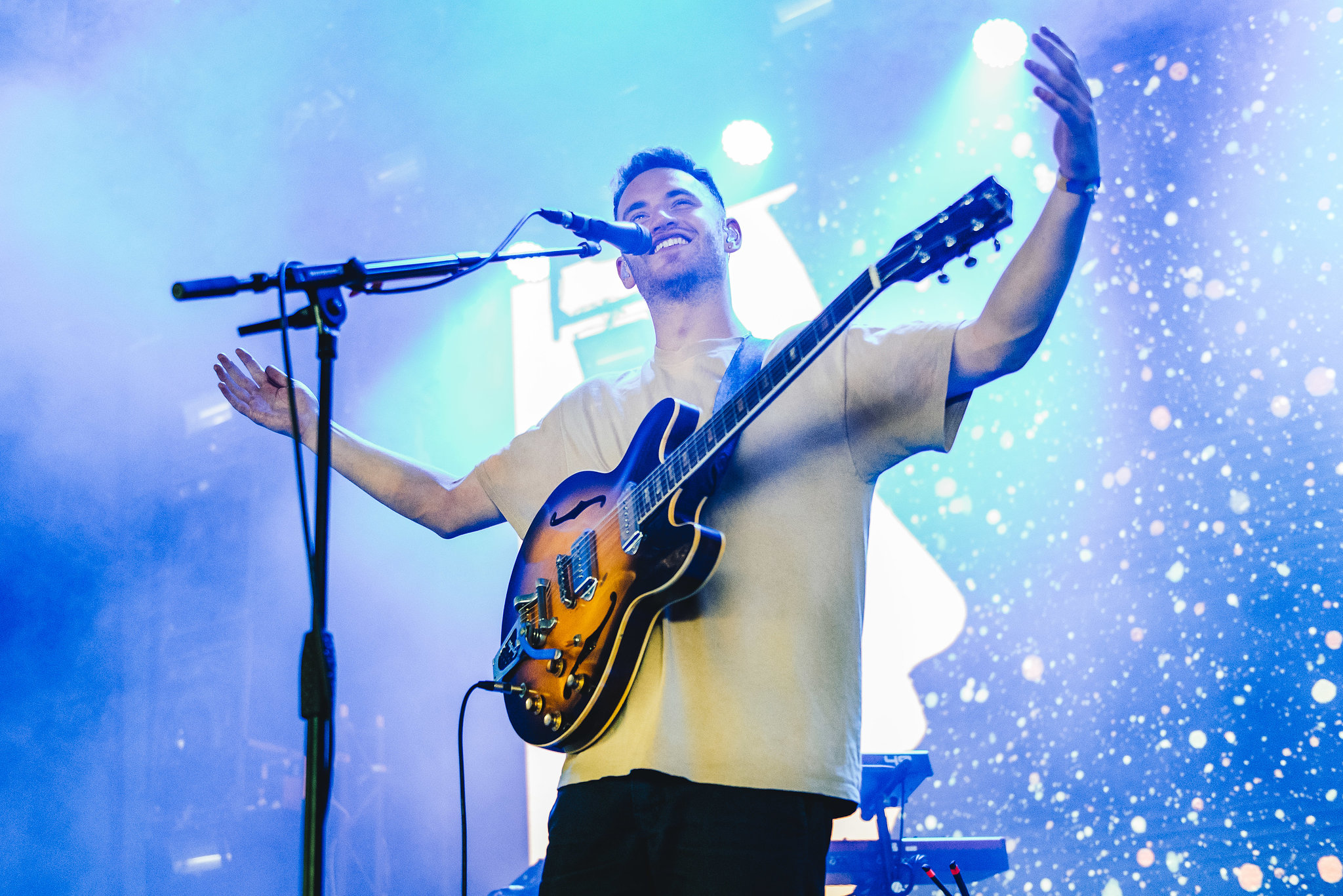 After that was Bicep. The duo had a brilliant 2017, with single ‘Glue’ having the mainstream pull most underground DJs can only dream about. Well attended if not exactly jam-packed, they performed a decent set, full of the dreamy, deep house infused electronica they’ve become so acclaimed for. Yet something seemed missing, a combination of an erroneously early start time of 4:45 (!), and a crowd constantly weaving in and out for the full 75-minute duration. Artists playing at times completely incongruous to the vibe of their music would become a major handicap to the quality of the festival as a whole. Still, the inclusion of their 2015 release ‘Just’ was the highlight of their performance, its warm, bassy textures proving that Bicep could easily go in a more commercial direction without sacrificing their artistry.

Indie favourite Sampha was up next, on the Parklife stage. Kitted out in a red jumpsuit, Sampha’s mellow, soulful voice carried well across the huge stage he was on. Scheduled perfectly as the midday sun’s heat began to wane, his rapturous ‘No One Knows Me (Like The Piano)’ was bruised and genuinely touching, whereas paranoid closer ‘Blood On Me’ wobbled with menace, ending with an ominous drum circle. Best of all was the Warp Records aping ‘Kora Sings’, which best showcased the control and range of Sampha’s voice. Today’s set showed us that Sampha may have future greatness in him.

In spite of her central billing on the poster, Lorde was granted a mere hour’s set, yet in that time, she was spellbinding from start to finish. Wearing a sort-of baroque mesh bodysuit with a league of grey-clad interpretive dancers, her setlist was generously spread between old hits and newer material. Starting with the paranoid, breathy ‘Sober’, Lorde’s vocals were wonderfully clear, part Stevie Nicks, part Prohibition-era gangster. The performance was peppered with cheerful stage banter, from amusing anecdotes about vomiting Mancunians to granting us permission to sing along to her stunning rendition of ‘Liability’ (even if she complained about the noise pollution from other stages). The best songs were the more experimental ones: ambient fan favourite ‘Ribs’ was bleak and beautiful, ‘The Louvre’’s sidewinding tension built up to a glorious anti-chorus, and Supercut was spectacular in its Robyn-aping melancholy. Punctuated by Lorde coming into the crowd and hugging fans, it was an exceptional show by an artist at the top of her game, and the best thing I saw all weekend. 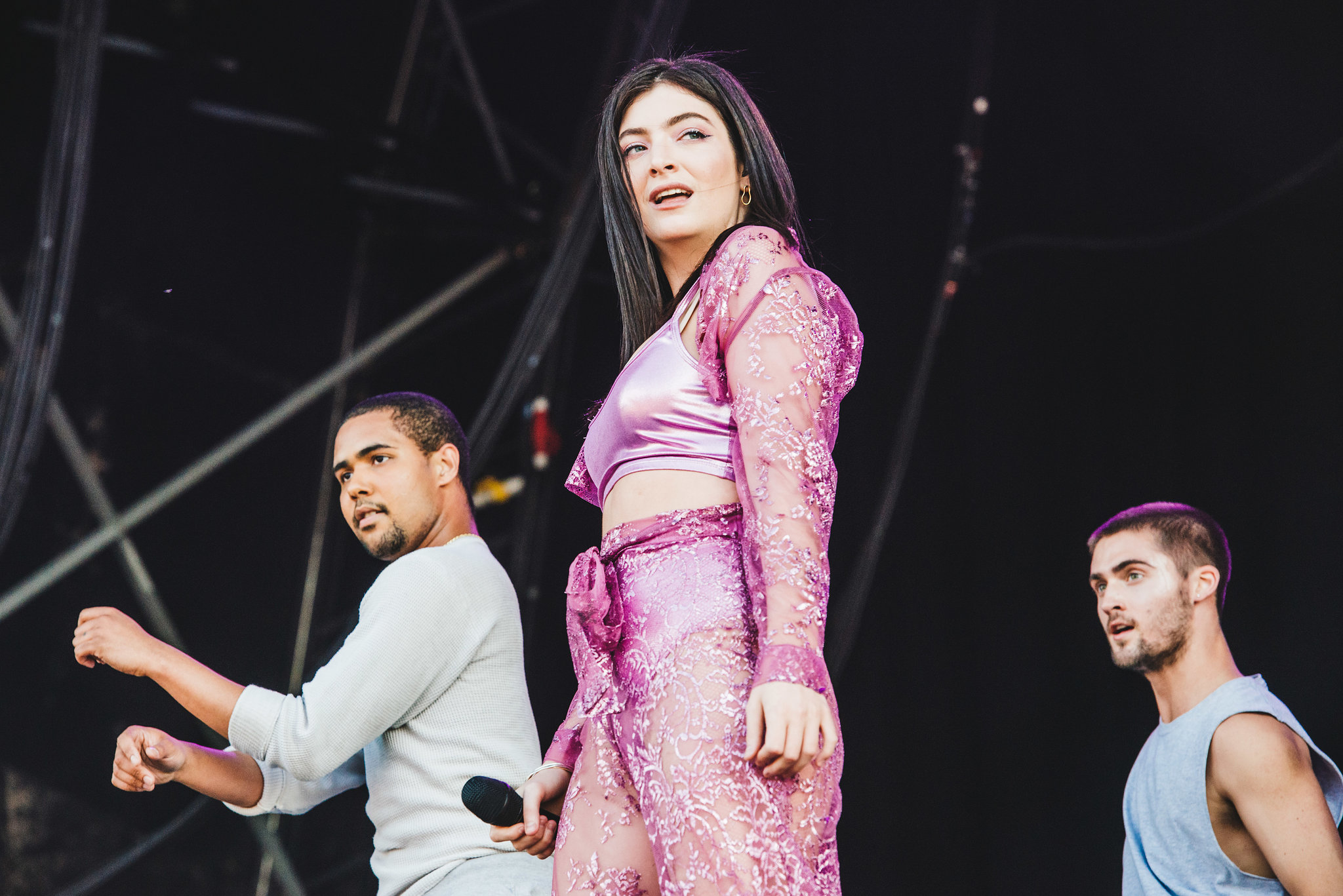 Sadly, the same cannot be said for IAMDDB. Marketed as something like a grittier Jorja Smith, her set at the Valley stage was marred by an unfortunate timing slot, an unenthusiastic crowd and frankly, a poor performance. It was hard to tell whether she was singing or rapping, and after nearly 10 minutes of DDB ranting instead of performing, the crowd started to get impatient. A mere 25-minute set was pretty much over before it started, and the wince-inducing response of ‘AJ Tracey’ (performing immediately after her), when she asked for requests, was painful to behold. Her childish response to the situation on Twitter didn’t help much, and one can only hope she uses this disappointing performance as a learning curve for future greatness.

Back at the Sounds of the Near Future tent, Bonobo played an adequate and well attended 90-minute set. Hot off his breakout album ‘Migration’ last year, Bonobo has made the meteoric rise to headliner billing deceptively quickly. His atmospheric sound has elements in common with fellow maximalist Jon Hopkins (who played before him), yet tonight his set was curiously restrained, bordering on low-key, an odd vibe for an 8 pm headliner. The excellent ‘Bambro Koyo Ganda’ gained a dramatic intensity live, yet much of the rest of the set descended into anonymous, middling ‘world’ music. Although well mixed and professionally performed, Bonobo never took flight like I was expecting.

Main headliners The xx were hotly anticipated, and rightly so. With 3 hugely influential albums under their belt, they have proved themselves to occupy a special space in the music industry, both hugely popular and boundary-pushing. I have seen them 4 times now, and although their stage banter has become increasingly rehearsed, their artistic prowess improves every time I see them. Starting with the superb, horn-assisted ‘Dangerous’, they glided through the set with the ease that only comes with 2 years of touring. The Jamie xx remix of ‘Shelter’ was at once danceable and bleak, and ‘Say Something Loving’ was clatteringly brilliant. The canny interpolation of Madonna’s ‘Ray of Light’ was a nice wink to the pop influences that inform their music too, and closer ‘Angels’ was as nuanced and touching as expected. This was an excellent set that rounded off the day with a warm, monochrome glow. 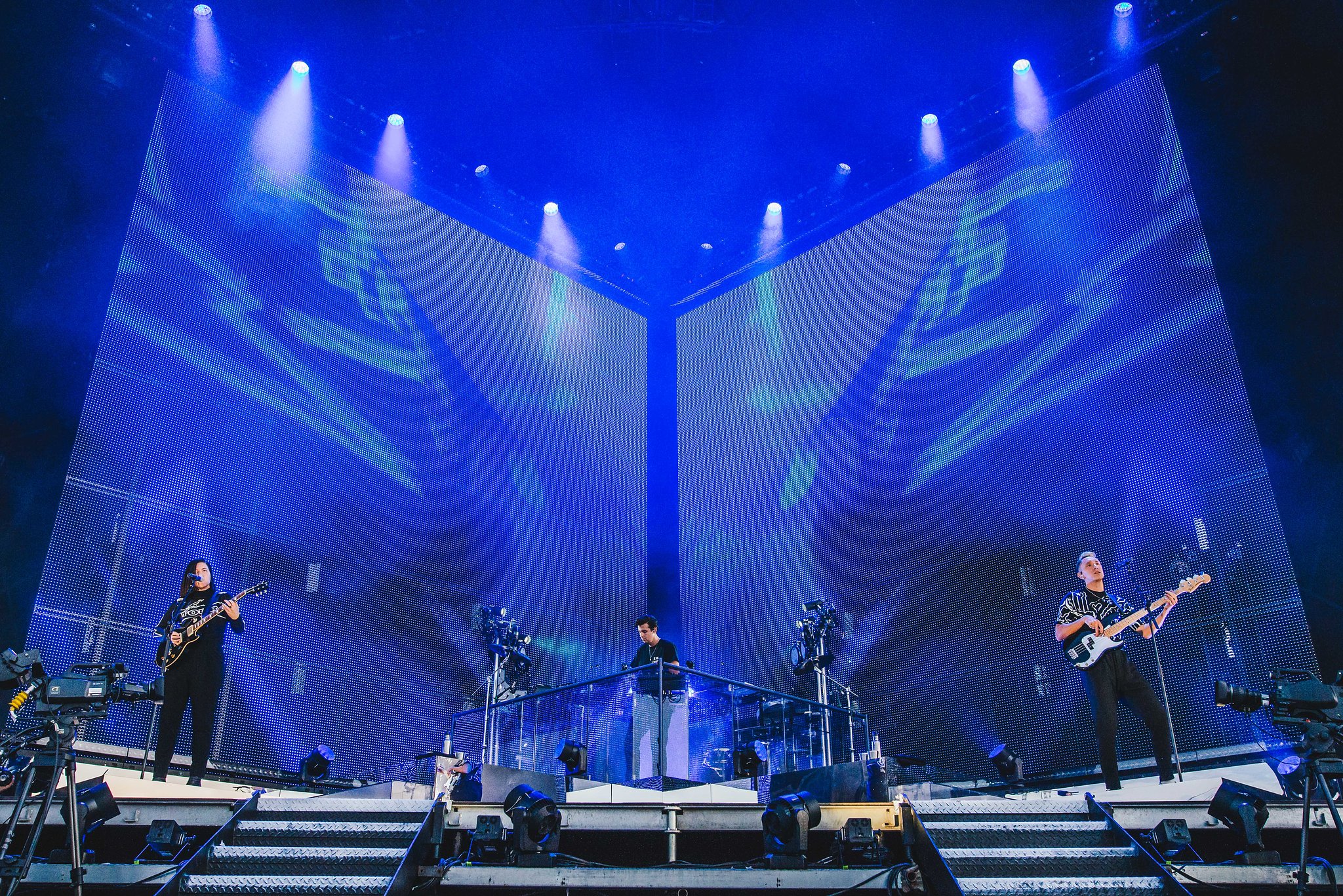 Happening simultaneously was A$AP Rocky. Or, rather, not happening. The rapper, fresh off the release of his excellent album ‘Testing’, showed up 30 minutes late to his hour’s set, which did not set a promising tone. When he finally did emerge, he was slurring and dismissive, repeatedly skipping songs on his setlist. ‘L$D’, when it arrived, was well-received and atmospheric, and FKA Twigs-featuring Fukk Sleep was good if performed with apathy. The biggest confusion of the night came with closer ‘Wild for the Night’: Rocky kept demanding a mosh pit and hundreds of enthusiastic teenagers gladly obliged. Just as the hammering dubstep song was about to drop, A$AP’s sound was dramatically cut, with fireworks and moshing taking place in complete silence. It was an absurd, anti-climactic, image and although he managed to say goodnight to his fans, this hiccup indicated how wrong things can go when the stakes are as high as they were here. 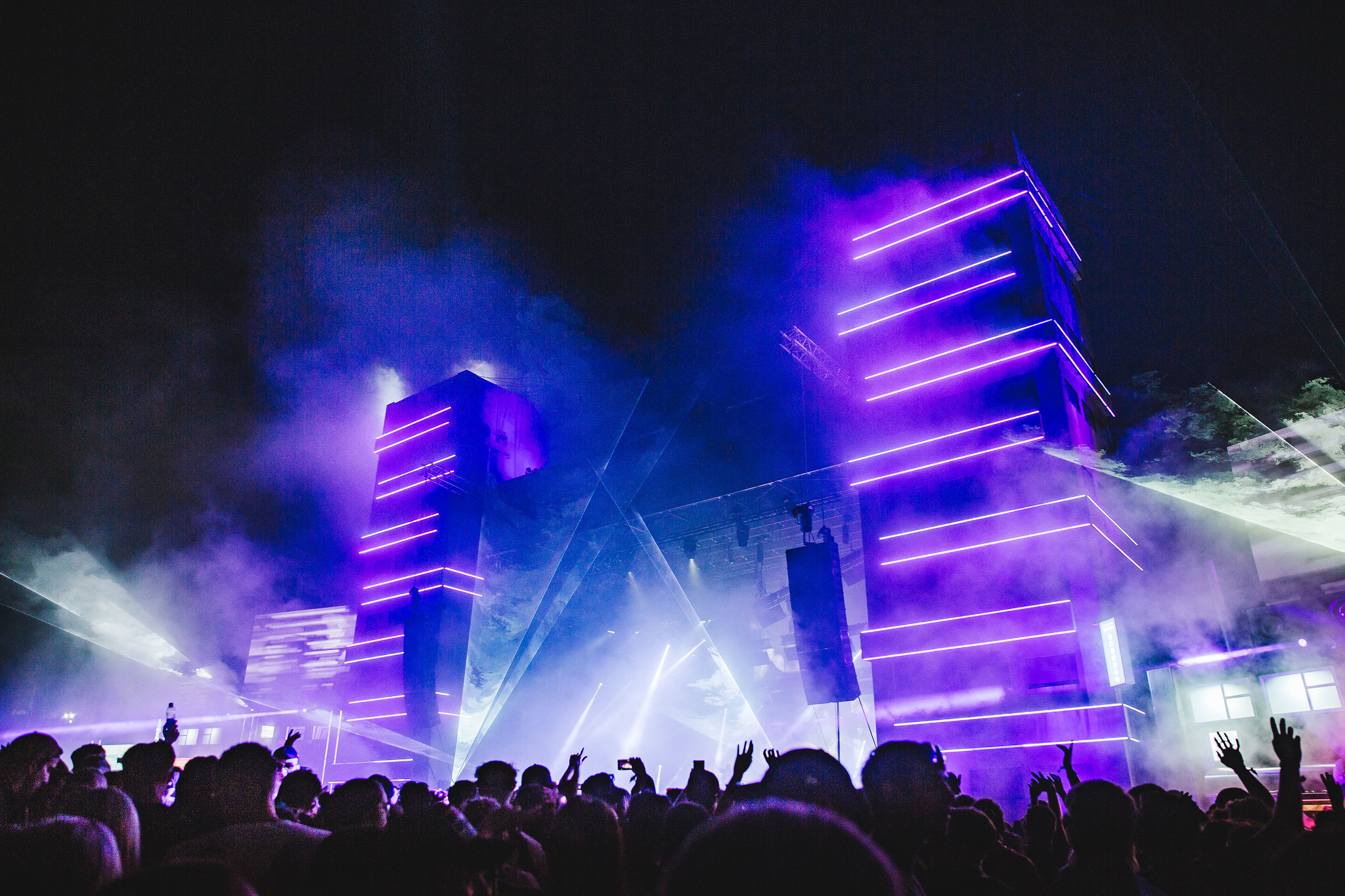 Sunday of the festival felt mellower, be it the cooler, wetter weather, or perhaps the collective strain from Saturday’s heady intensity. Either way, the less frenetic pace meant, happily, the music took centre stage even more than normal.

Everything Everything, despite only having released 4 albums, feel increasingly like a legacy act, carving their own niche of critically respected (if not adored) art pop. They did a cheerful set on the Parklife stage, decked out in jumpsuits, although lead singer Jonathan Higgs sounded weary from a flight from Manchester, Tennessee the same day. ‘Spring/Sun/Winter/Dread’ was dense and peppy, with Higgs’ reedy falsetto adding an apocalyptic tension to the proceedings, whereas ‘Kemosabe’ had the crowd respectfully bouncing in spite of the incoming rain. By the time ‘No Reptiles’ closed the set, you could forgive Everything Everything for their esoteric lyrics about fat children in pushchairs and soft boiled eggs in suits. A good set is a good set.

It makes a weird kind of sense that Chvrches managed to get together an enthusiastic crowd in the pouring rain. This is a band who played 365 gigs in the 2 years preceding their excellent debut album, and they oozed workmanlike ease in their sodden show on the Parklife stage. Lauren Mayberry is a wonderfully charismatic performer, galloping across the stage for the synth-fried Clearest Blue, and whilst second in command Martin Doherty naturally suffers in comparison, his performance of Under the Tide was nothing less than thrilling. The newer singles, flat and thin on their mediocre album Love is Dead, were vibrant live, especially the politically informed ‘Get Out’, whose huge chorus was a fan favourite. Punctuated with jokes about Liam Gallagher’s Twitter, they made me completely forget about how cold I was for 45 straight minutes. A true achievement. 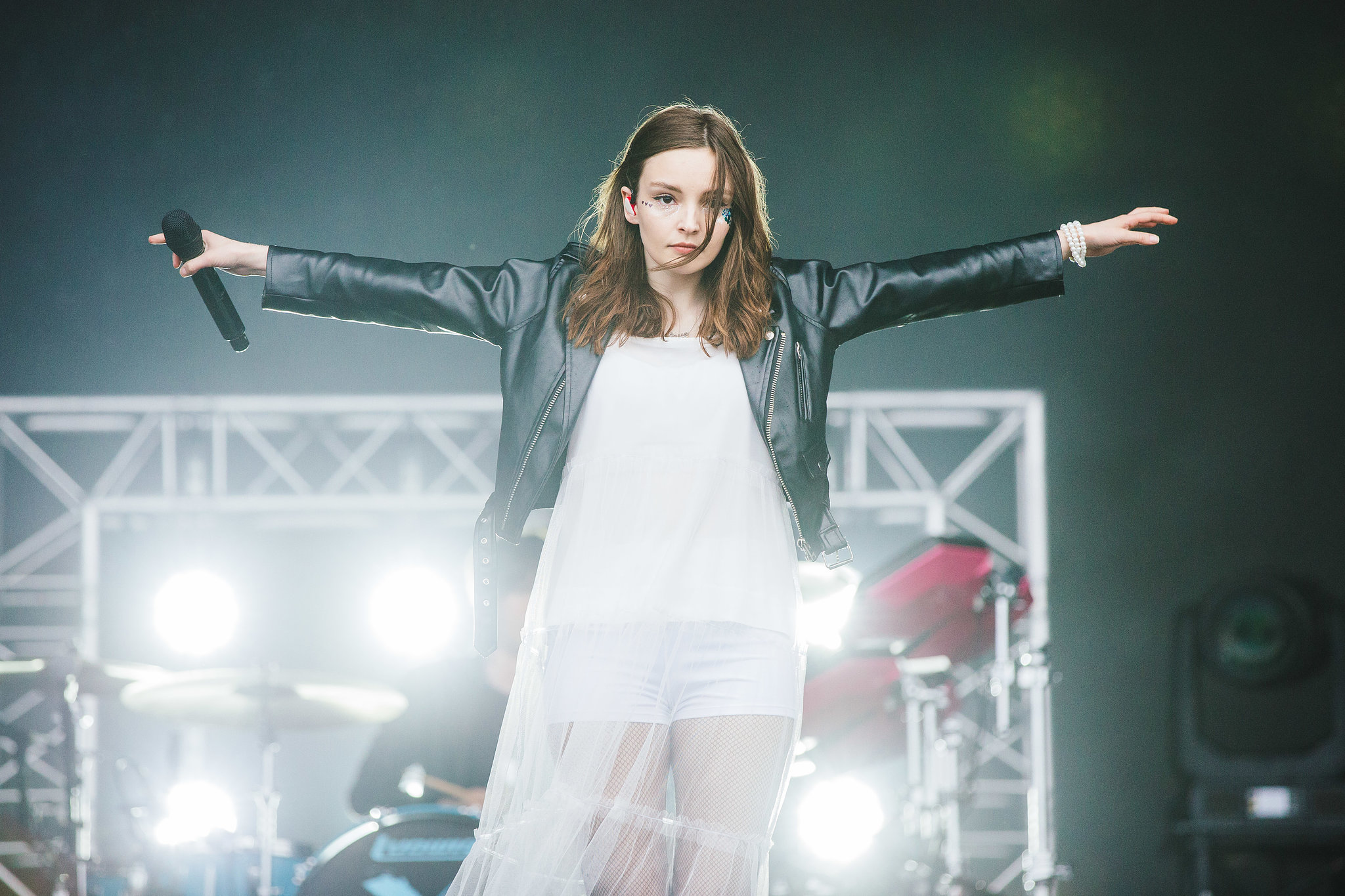 You had to feel sorry for The Internet. J Hus, on before them, had considerably overrun, leaving them late for their own set. This was made worse by technical issues which meant they ended up starting their set close to an hour late. It led to an uncomfortable atmosphere in the Sounds of the Near Future tent, with the full band waiting on stage as sound engineers struggled with cables. Things didn’t improve when they started playing: on top of her vocals being utterly buried by her band, lead singer Syd’s microphone kept cutting out, unhelpful with a voice as delicate as hers. It was not a complete disaster: the sensual ‘Dontcha’ was received well, and Kaytranada-produced closer ‘Girl’ had shades of George Clinton when performed in a live setting. The band made the best out of a bad situation, but Syd’s constant requests for audience participation merely seemed to be compensating for the (literally) dampened vibe.

In the luxurious Palm House stage, Jamie xx was excellent. Impressively mixing vinyl live, his 90 minute set was a generous offering of mellow deep house, body moving electro and a few of his own tracks from 2015’s In Colour. Ridiculously packed from start to finish, highlights included Karizma’s ubiquitous ‘Work it Out’, Cheryl Lynn’s disco staple ‘Got to Be Real’ and Jamie’s own transcendent ‘Gosh’. A rare instance of a DJ set rivalling a live performance at a festival. Excellent. 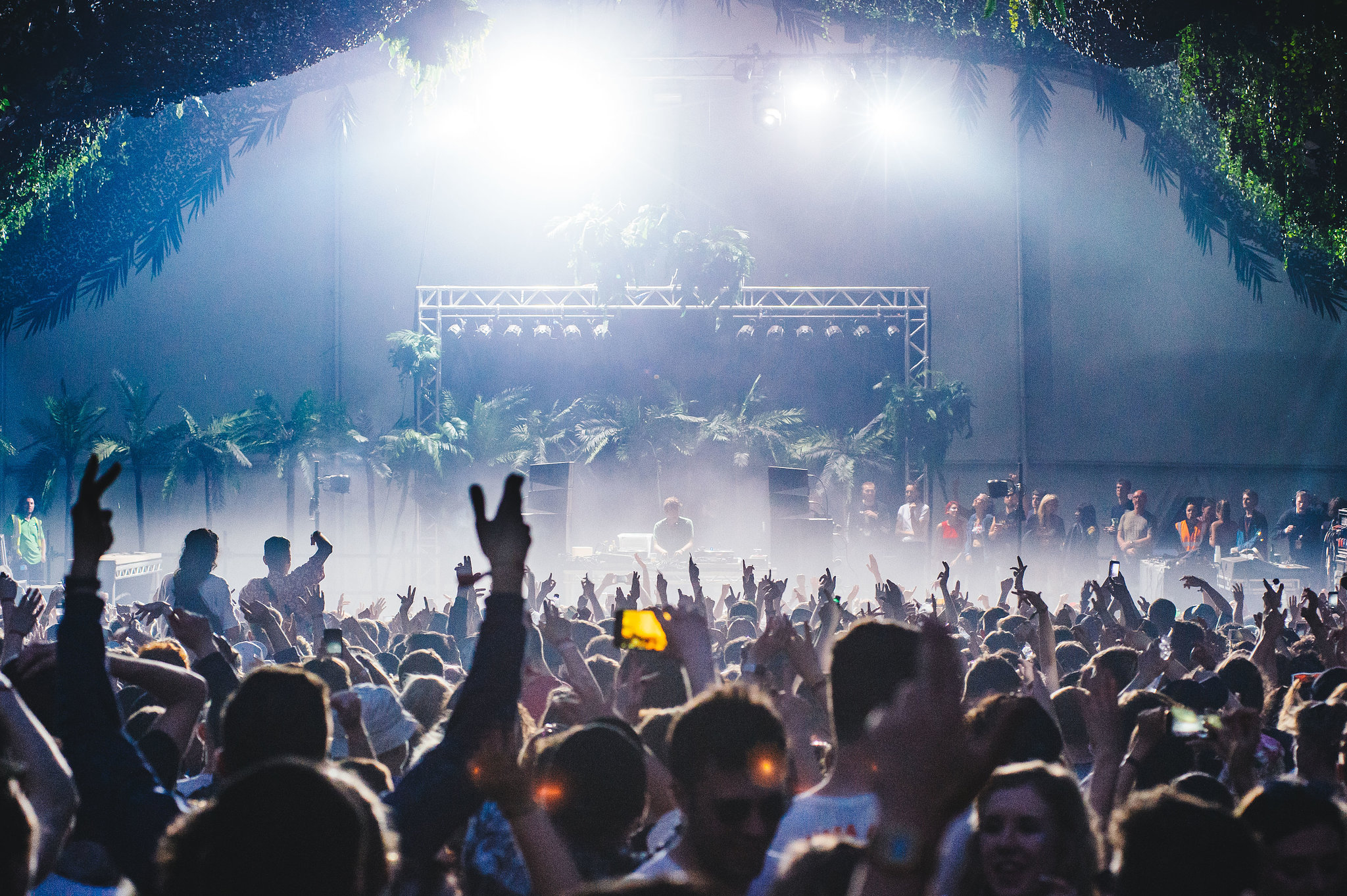 After the whole The Internet debacle, you wouldn’t blame Vince Staples for being nervous or cagey. That would be the wrong assumption to make. Delivering a fearsome set, decked out in a mocking would-be police uniform against a backdrop of glitchy TV screens and heavy smoke, his performance was everything good about his music: caustic, ironic lyricism made a whole lot of fun. Leaning heavily from last year’s Big Fish Theory, almost every song was a highlight. Norf Norf, nauseatingly understated on Summertime 06, became heady and maximal. The surprise (but thoroughly welcome) inclusion of Ascension, his song with Gorillaz, was a wonderful moment, as was the jackhammering closer Yeah Right. Vince’s proclivity to work with experimental producers such as SOPHIE marks him out from his peers, and it was a wonderful sight to see hundreds of people enjoying such angular, ‘difficult’ music. Best of all was triumphant call-to-arms BagBak, a noisy, punky FU to the powers that be. Hearing its damning closing incantation, ‘Tell the President to suck a dick because we on now’, was the most rousing moment of the weekend. Punk may have died 40 years ago, but it felt very alive tonight. 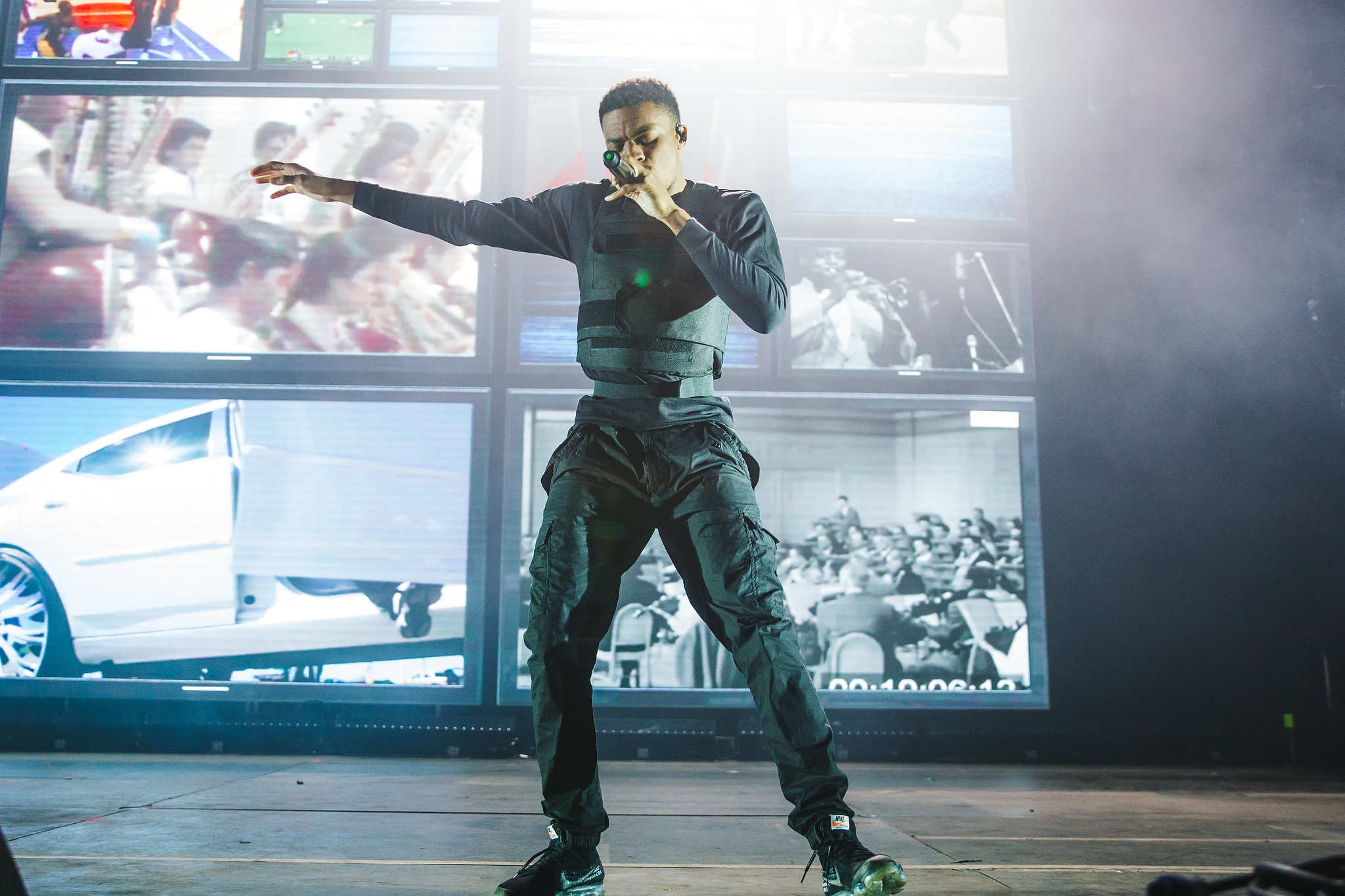 With a jam-packed lineup of bands that have reached the lofty heights...