The weekend of the August bank holiday was, of course, dominated by hype and coverage of the Reading and Leeds festivals. With the Likes of Kasabian, Eminem, You Me At Six and Muse topping the billing, it’s easy to see why. It’s easier still to see why it’s one of the UK’s most anticipated summer events. However, with all the hubbub that infects the UK’s music scene during the summer, it’s also easy to forget about the wealth of events taking place across the rest of Europe and the globe at large.

One such event is Rock En Seine, the Parisian spectacle which Riot Mag attended as it set up its camp a mere stone’s throw from the river, and treated those more suited to the Parisian climate to a weekend of stellar performances from stellar artists while its British counterpart was doing its thing across the Channel.

It’s difficult to alleviate the excitement for the days ahead after two members of Parisian four-piece Therapie TAXI treat us to a stripped back, acoustic set on board the Eurostar during the journey to Gare du Nord. We do manage the feat somewhat during the rather awkward journey to the ‘Parc de Saint-Cloud’ festival site on the outskirts of Paris – the general state of Paris’ traffic, and the fact that Paris Saint-Germain were playing the following day don’t help the situation – but the picturesque setting awaiting us once we find our way inside the site swiftly helps us forget all our transportation-related worries.

Once inside, the first stop is the ‘Scéne Cascade’ stage – the event’s second largest – where The Jesus And Mary Chain are playing to one of the weekend’s biggest crowds. It’s testament to Rock En Seine’s timetabling prowess and layout that, after our first stop, it’s not long at all before Franz Ferdinand take to the (almost) adjacent ‘Grande Scéne’ stage, after a significant but not inconvenient walk. Speaking almost entirely in French to the thousands of gathered fans – a move as classy as frontman Alex Kapranos’ cream chinos and yacht-club esque blazer would similarly imply – their set is one that spans the ages. From ‘Jacqueline’, plucked from their eponymous debut album, to ‘Love Illumination’ from 2013’s Right Thoughts, Right Words, Right Action, the band provide one of the standout performances of the weekend, and draw the corresponding adulation from the masses with aplomb.

The Shins close out Friday’s action on the ‘Scéne Industry’ – or ‘third’, to us British folk – stage, right after MØ shines during her set, bringing her brand of synth-tinged electropop and magnetic charisma to the festival’s second stage. James Mercer’s Albuquerqueans, in their closing set, span their over-twenty-year career thus far, with tunes from each of their five studio albums to date. All are warmly received by the crowd who help to create a hideaway-like atmosphere, tucked away with Mercer’s mellow sound – but none more so than ‘Phantom Limb’, ‘Simple Song’ and ‘New Slang’, played consecutively in a triple whammy which sends the crowd – and Riot Mag – into the night amidst the warm glow of their folk infused indie stylings. It’s a first day to remember.

The second day offers little in the form of respite from the excitement for fans. It sees Band Of Horses and Jain take to the main stage back to back, with the latter, playing on her home turf, drawing a crowd whose numbers remain unmatched for the remainder of the event, while Vince Staples, PJ Harvey and Sleaford Mods all contribute to what has been given (and so far lived up to) the label of one of the best European lineups of the summer. The second day also presents our first opportunity to sample the food and drink on offer around the grounds of the festival. While very pricey, there’s a good selection on offer – from noodles to fajitas to the standard burger and chips – with beer, cider, spritzers and more providing refreshment of the alcoholic variety.However, it’s the third and final day which steals the show. Mac Demarco opens with his self-styled “jiz-jazz”, in a set which features an unorthodox cover of ‘A Thousand Miles’ by Vanessa Carlton – one where the only lyrics, either because of legal reasons or laziness reasons, are “making my way downtown”, and where he controls the tempo of the band, raising and lowering it to the extremes of the scale like a deranged, giddy, cap-wearing conductor. 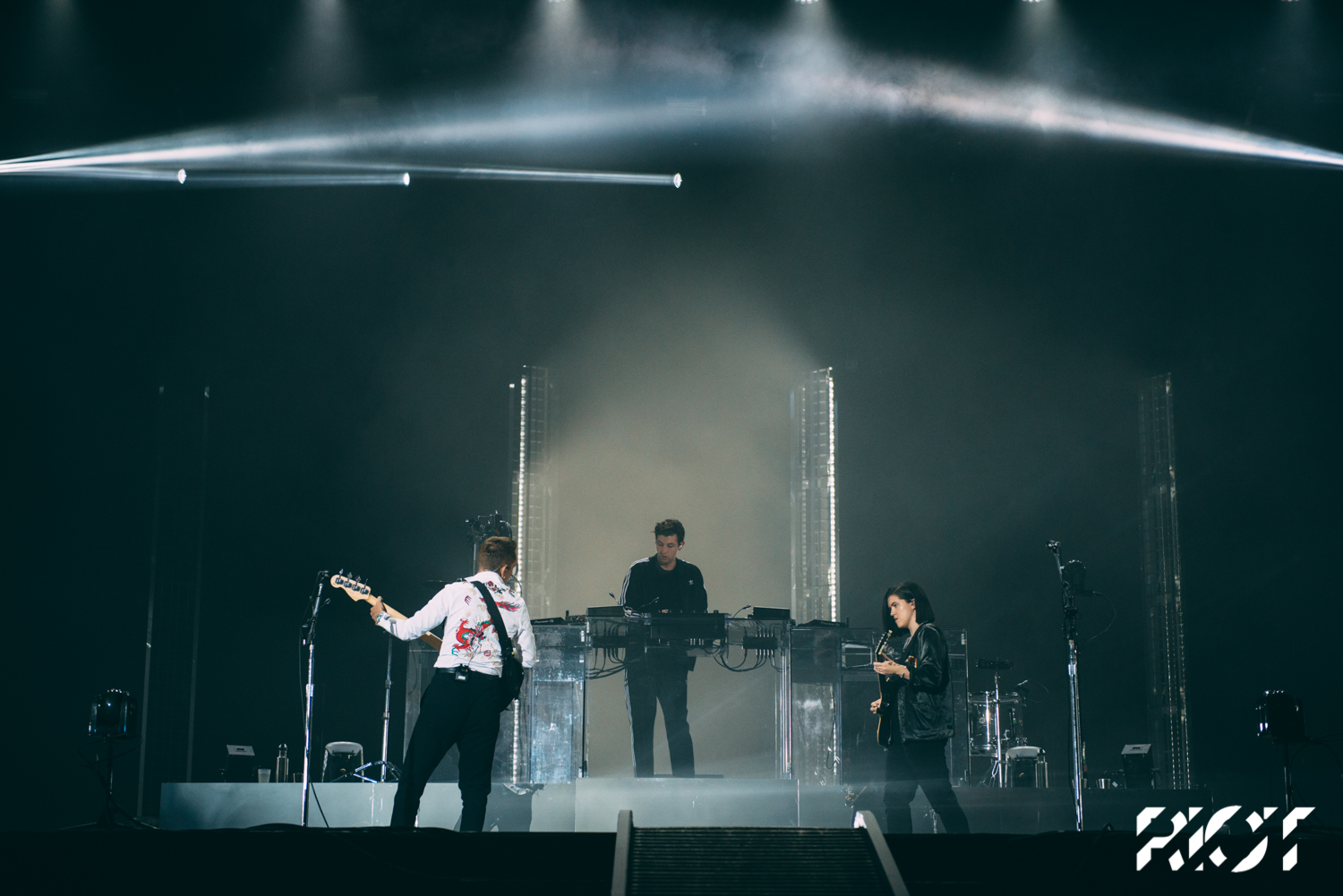 The xx during their closing set – credit: Patrick Gunning

Afterwards, Rejjie Snow storms the ‘Scėne du Bosquet’ – the fourth largest stage – and in the process makes its secluded setting, half way up a semi-sheltered curving incline, feel like a fully fledged London rave. It’s then the turn of Cypress Hill to cause some organised chaos, which they succeed at in imperious form, spliff in hand, before The xx take to the main stage to close out the final day in their inimitably understated, majestic style.

Having first come into being in 2003, Rock En Seine’s profile has been growing steadily in the fifteen years since its inception. This year, opening its gates to about 110,000, and playing host to over 80 artists, the festival has taken one step closer to becoming one of Europe’s heavyweights. The eclectic range of fans, the green, picturesque setting and, above all, the music helped create a fun, safe, friendly atmosphere, and turn the event into what should be a top priority for anyone planning a trip to Paris next summer. We certainly will be, and we can’t wait.