The release of Shame’s second album – the incendiary Drunk Tank Pink – back in January left fans itching to see the new material performed live. For many, Shame’s Friday night set on the Far Out Stage was their first chance to experience tracks such as ‘Snow Day’ and ‘Born in Luton’ in their full, riotous glory – and the band did not disappoint. The set began with album opener ‘Alphabet’ and jolts of energy seemingly bounced around the tent, waking the crowd up after their 18-month hibernation. Frontman Charlie Steen encouraged the mosh pit, feeding off the energy of his fans as he charged around the stage.

In a demonstration of Shame’s musical progression since the days of shouty post-punk and sweaty South London gigs, Steen invited members of Caroline onstage halfway through the set for a moving, orchestral rendition of ‘Human, For a Minute’. It was a beautiful moment: the atmosphere changed from one of restlessness to one of reflection as everyone in the audience let the sounds wash over them.

The set ended with Shame’s breakout single ‘One Rizla’ and Drunk Tank Pink closer ‘Station Wagon’, two songs that perfectly showcase either end of Shame’s musical spectrum, from old to new, from crowd-pleasing to experimental. Steen threw himself into the crowd, held up by devoted fans like a god amongst worshippers. From start to finish, Shame’s set felt truly cathartic; it was an opportunity for both the band and audience to release the many complex feelings that the last year and a half have churned up. Forget Caribou — this was a headline set in its own right. FH 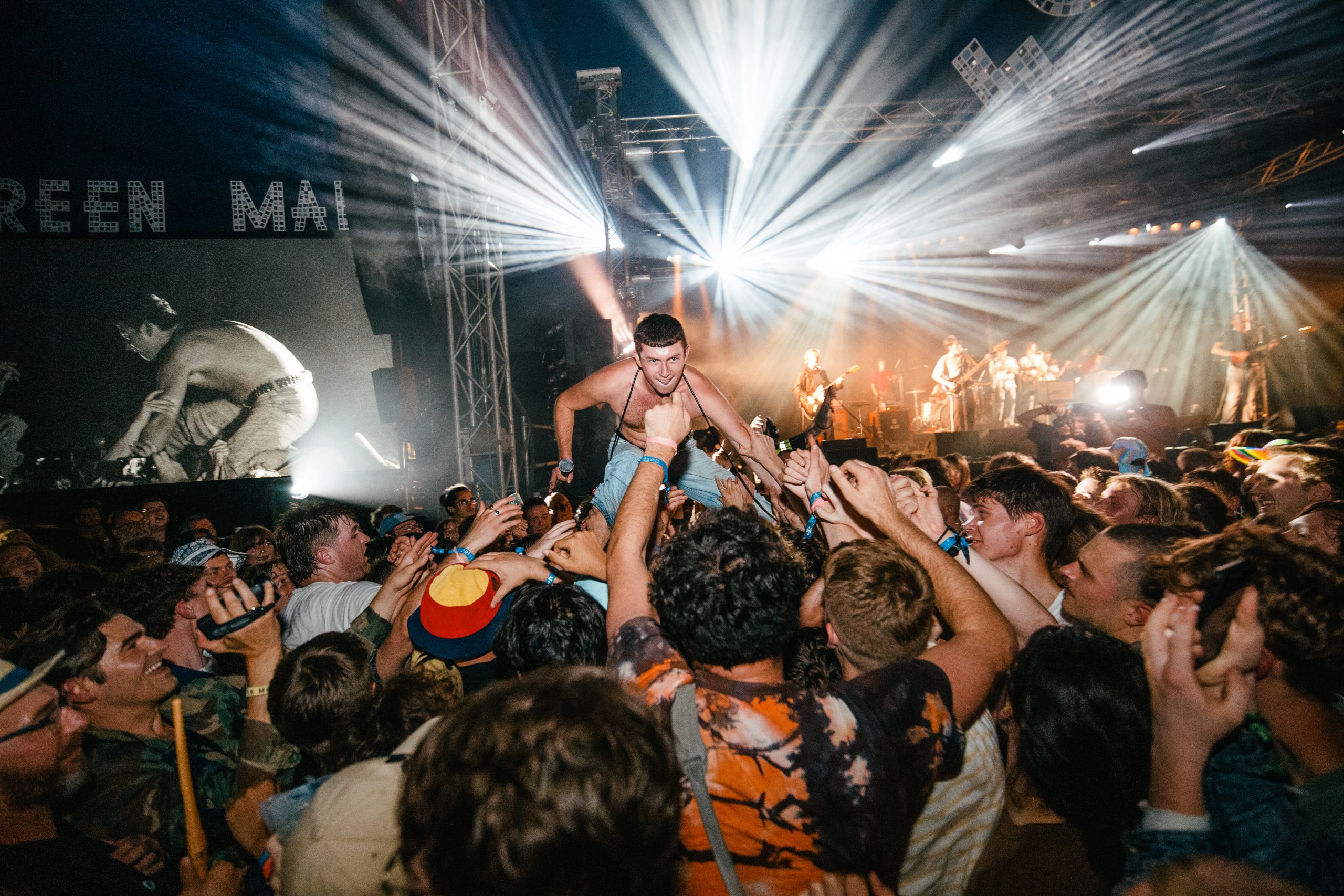 Shame headline the Far Out Stage on the Friday at Green Man. Photo Nici Eberl

Don’t let her unassuming nature fool you, Georgia is fast becoming one of Britain’s most valuable pop assets. In a nod to her Seeking Thrills album artwork, a modest stage backdrop reads georgia in lower-case Helvetica, with a solitary (if rather busy) drum kit standing in isolation at centre-stage.

Opening the set with the rousing ‘Started Out’, Georgia embarks upon an energetic 40-minute set. Periods where the producer clutches the mic and bounces at the front of stage are countered with forays behind the drum ket, where Georgia (who has previously toured as Kae Tempest’s drummer) takes the reigns of the rhythm section. The euphoric pop of ’24hrs’ closely follows the opening track, punctuating a relentless inaugural ten minutes of danceable synthpop.

In a set that was filled with forays whilst remaining cohesive, Georgia visited the dub-flecked ‘Ray Guns’, as well as her cinematic, bass-heavy cover of ‘Running Up That Hill’.

Rather than building a setlist to cater for her hits, Georgia has mastered the art of delivering an unforgettable mobile disco to a mixed festival crowd. As indebted to the heavy bass of Chase n Status as she is to the electronic pop of New Order and Robyn, Georgia has pooled a cocktail of influences to create a set that is not only irrefutably cool, but exceptionally fun: which is no mean feat. MG 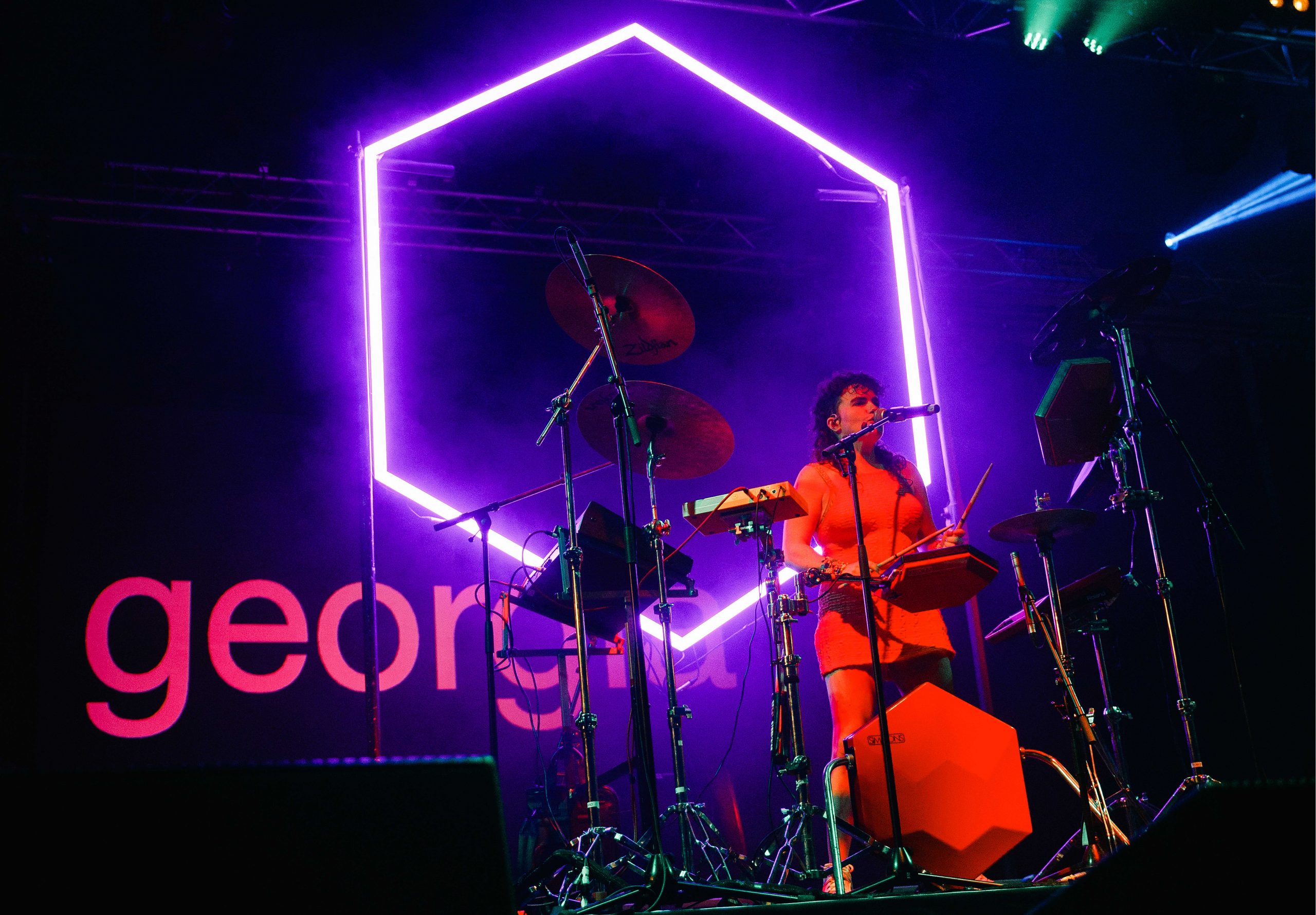 “Despite the fact that I’ve come out in a transparent raincoat and a cowboy hat, I’m surprisingly shy,” Evans confides to the audience. His shyness is well concealed however, with self-aware jokes between tracks and a cool demeanour throughout his performance. New song, ‘Plastic Man’ delivers a Kinks-esque blend of jaunty rock guitar and simplistic vocal delivery, played before a Hawkline-esque rendition of George Harrison’s ‘Behind That Locked Door’.

Sporting a cream 12-gallon hat, Evans makes a rare address to the audience to introduce his bandmates, as bubble machines from the crowd conspire with Hawkline’s laid-back folk rock to cast a lazy summer glow over an overcast festival. MG