Odd Morris are a band with the wind in their sails. Hailing from Dublin, Daragh Griffin (vocals, guitar), Ciarán ‘Mac’ McCarthy (bass), Kris Hassett (guitar) and Sam Martin (drums) are making waves in a vibrant and burgeoning music scene across the Irish Sea.

The four-piece have forged a unique and stand-out identity in a city home to the likes of Fontaines D.C and The Murder Capital, siphoning elements of post-punk/grunge and further distorting them, designing a dark and brooding sonic that separates them from any other sound in the city. The Dublin outfit build on deep-seated mutual influences to create songs that are incisive, honest and vivid.

After releasing just three singles, Odd Morris have begun building a fiercely loyal fan base and are gaining recognition for their compelling and visceral gigs. We caught up with the boys for a quick chinwag.

Let’s start at the beginning – How did you guys meet and what was the motivation behind forming a band?

Daragh: We met in secondary school. Whilst on my Erasmus I’d spent the majority of my time in the music room on campus, it’s there I first started to write songs. When I came home to Dublin, I performed them at an open mic. I loved the feeling of being on stage, so I got in touch with the lads one by one and we eventually formed in 2017.

Your sound is incredibly unique, but seems to draw on post-punk/grunge influences, are there any stand out acts that have shaped your music, both sonically and lyrically?

Daragh: Elias Bender Ronnenfelt from Iceage has had a huge impact on my lyricism, just in terms of his grasp of the language. Brooks Nielson from The Growlers has a terrific unique quality too, very direct and non-poetic but in a way that doesn’t seem glaringly obvious or spelled out. Sonically, it’s all over the gaff really. That’s what makes the sound interesting I guess, we’re not singing from the same hymn sheet a lot of the time. 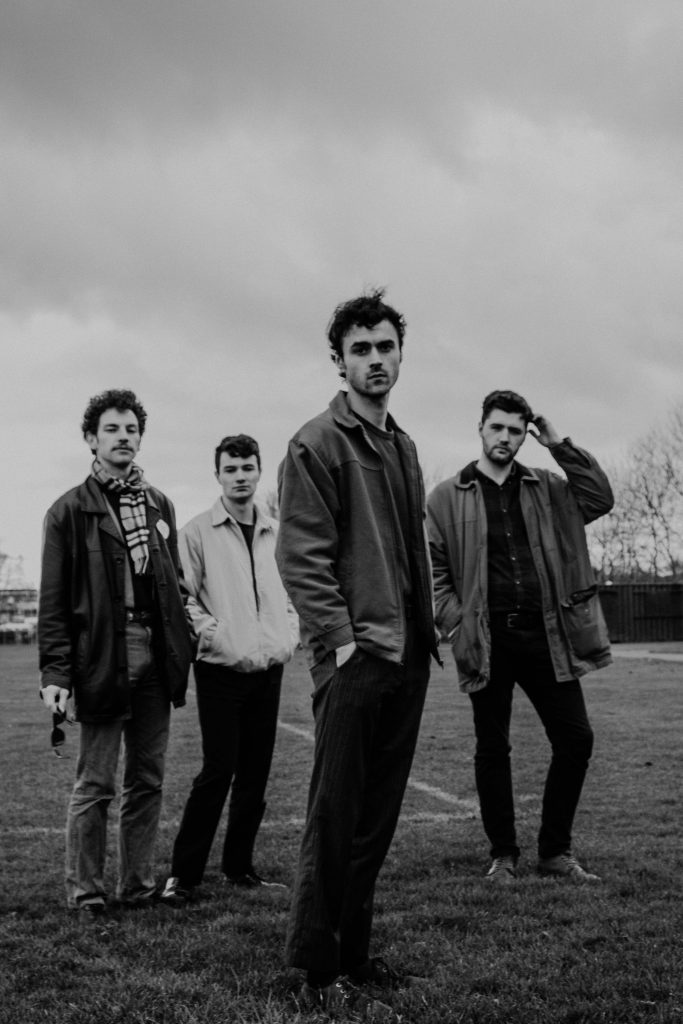 How would you describe the music you make?

Daragh: It’s fun for us to play and perform, so in that regard I’d say its honest. Maybe that’s why people like it? It’s also confined to the pedals we can afford to buy too, which makes the future a lot more interesting.

What was the last artist or track that one of you introduced the others to?

Daragh: I introduced the boys to one of my favourite Uileann Pipers not so long ago, and it struck a chord with everyone, so much so that we walk out to one of his reels. His name was Liam O Flynn, a true musician in every sense of the word. He’d a wonderful grasp of space, and respect for melody. Listen to The Humours of Kiltyclogher.

How did you end up sharing a rehearsal space with the likes of Fontaines D.C. & The Murder Capital?

Ciarán: We don’t share a space so much as a building, Yellow Door Studios. I think it was Carlos from Fontaines who recommended it to ourselves, but it’s no great surprise there’s so many great bands here, it’s right in the middle of Dublin city so makes a lot of sense.

Is this where you write your music?

Daragh: Yea, every note we’ve come to play live has been written in that room. It’s a special space, all the rooms, the corridors, the industrial space outside, we love it. Bloody freezing though.

What is your songwriting process?

Ciarán: Generally we spend a while purely focused on rhythm and melody, trying to build a structure that evokes some kind of meaning and imagery for us all. Daragh then takes that away and from there I’ve always felt it’s kinda like a conversation… that soundscape and it’s feeling informing him in his lyrics, and the instrumental responding to that.

‘Cold Water’ is a story told in two halves – What story is each half telling and why did it feel necessary to write the song in this way?

Daragh: It was necessary because that’s where the melody demanded to go. It’s just like how a river meanders and cuts away at the banks, it does what it wants – it’s the same for melody, you’ve to respect it. The second half is what I’m most proud of anyway, and it includes a stanza of a poem that I’d written about a person. It’s a weird version of a love song in ways.

‘Lilac Leaves’ is a personal account of moving away from the family home. Why did, you want to pen something so personal?

Daragh: I write every day, without fail. I have to, it’s a way of me dealing with emotions and I get to know myself a bit better through the act of writing. So by writing everyday it’s no surprise that I’d be uprooting personal qualms and topics. I also feel it’s my responsibility to get personal, only then am I being true to who I am and therefore being authentic as a musician.

You’ve only released three singles, but you are gathering serious momentum. Steve Lamacq is singing your praises, you’ve made numerous ‘one’s to watch’ lists, supported the likes of Fat White Family and Ezra Furman and you’re playing Annie Mac presents this year. How does it feel to be gathering such support and veneration so early in your careers?

Daragh: Very humbling. We’re in a band because we’re passionate about music and expression. So it’s just really, really fucking enjoyable to be writing music that other music lovers can enjoy. I think we’re all keen on being able to give something back to music, a snippet of what it’s given us. 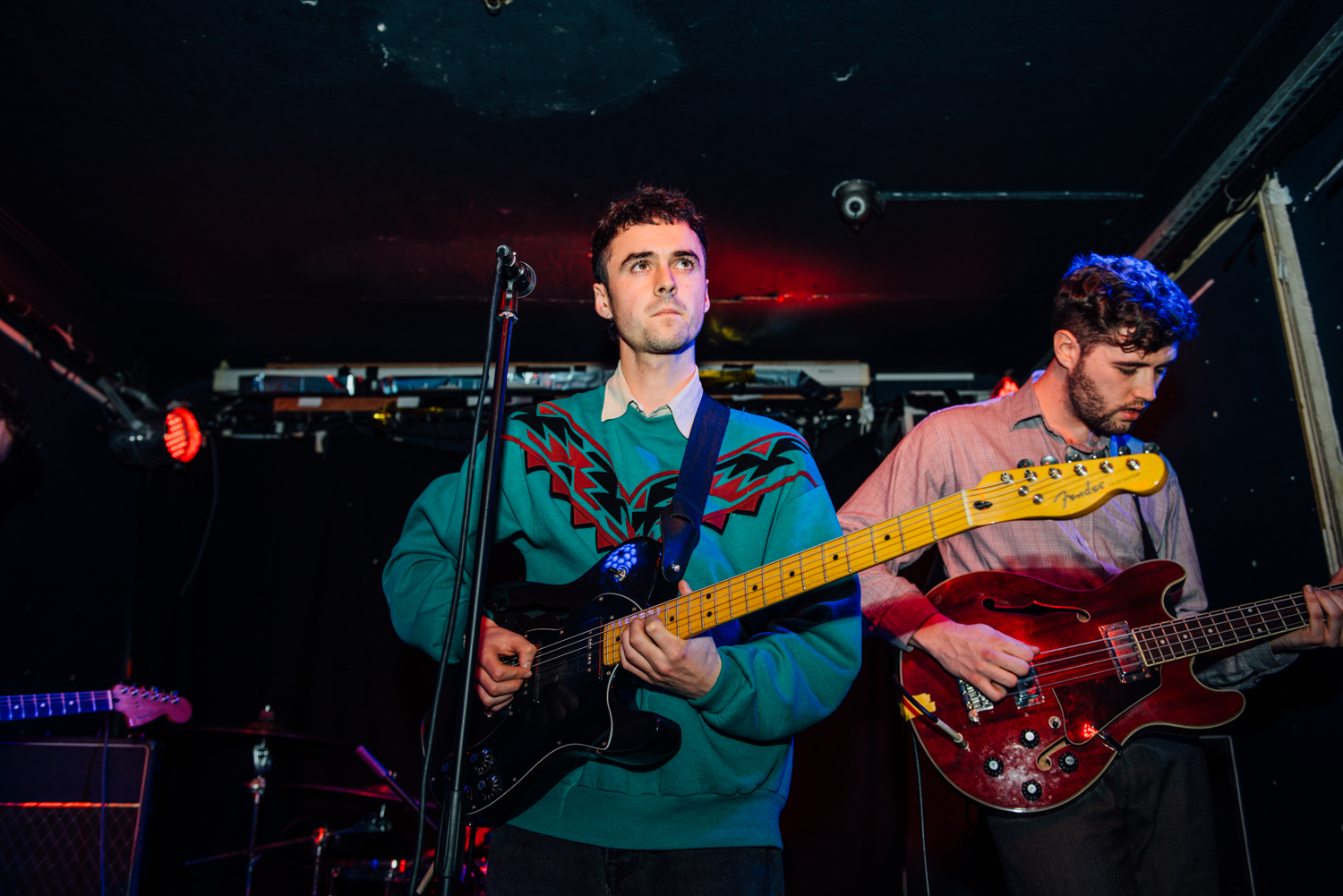 Do you feel as if things are moving fast?

Daragh: No not entirely so, it’s always been a very steady progression from our first show until like, our first show in London. I guess since then, it’s started to pick up a lot, but we’re more than ready and really excited to play for larger audiences.

You’ve played a lot of gigs since starting out – Any of them stand out as a favourite?

Ciarán: Our shows in London, our recent gig in Whelan’s and the festival shows last Summer were great moments for us all I think. Can’t say I’ve a favourite though, always looking around the next corner.

You’re supporting Shame in May in your home city Dublin; Does this feel like a landmark gig for you?

Daragh: It’s funny kinda, we were in the crowd for when they played in Dublin last. The Murder Capital and Fontaines supported them. And when everyone went for pints after the show and got wrecked, the four of us walked to our rehearsal space at midnight and practised.

Will we be treated to new singles throughout 2020, maybe even an album?

Odd Morris take the stage alongside The Murder Capital later this week in London, before playing their own headline London show on March 5th.

We spoke to Liverpool duo King Hannah on the eve of their...

Sad Boys Club: "We're definitely cooking, I'm just not sure what the meal is yet"

We spoke to Sad Boys Club upon the release of their new...