HMLTD: “For a small period we became quite confused about what we were doing”

A nightclub in London’s zone one is rarely the setting for anything particularly avant or leftfield. Through the foliage of paralytic students, stag dos and city workers with ties in their pockets, however, there are occasional gems to be found.

On this Thursday night in particular, Shoreditch night spot XOYO has been Shanghai’d by those who straddle society’s outer border – or, at the very least, dress like they do.

The audience at HMLTD’s show are a sea of dyed hair, mesh clothing and overstated makeup; sparking the rare sensation in today’s London that there is a genuine subculture existing in the shadows.

As the venue playlist hushes and the spotlights gently amplify, a woman steps on stage, fully nude – bar a metallic belt and wolf mask. The basement room watches with equal parts entrancement and bewilderment as the model proceeds to hold a prop severed head aloft, before pulling her nipples and howling, and exiting the stage. You don’t get this at a Coldplay show…

“You can partially rehearse it, but there are things that happen on stage that you can’t predict”

HMLTD’s performance is mesmerising in its unpredictability and chaos. Strobe lights interject as songs mutate from ballads to violent electronica, whilst a man in a full leather face mask [do we still use the word gimp?] and a full 3-piece suit pops in and out of view, roaming the length of the stage with a camera in hand.

“You can partially rehearse it, but there are things that happen on stage that you can’t predict. Most of what happens is quite spontaneous,” frontman Henry explains to me. Henry speaks about the performance with a nonchalance that suggests he had noticed neither the naked wolf-lady, nor the gimp cameraman.

This uninhibited explosion of expression is consistent in everything that the London 5-piece produce; from performance, to record, to video.

The accompanying video for recent single ‘The West Is Dead’ sees HMLTD collaborate with Niall Trask, who often works with Fat White Family and has been described by Vice as “The weirdest shit that has happened in our inbox all year”.

“We actually didn’t know Niall,” Henry says of their recent partnership, ‘We came together through a mutual friend. Generally we just collaborate with friends of ours, like Duncan Loudon’.

As well as Loudon – who has also created visuals for Slowthai, Skepta and Mount Kimbie – HMLTD often work with Jenkin Van Zyl, who has received national recognition for exhibitions such as Kiss My Genders.

Henry, and indeed the full 5-piece, are hard to pin down. HMLTD borrow heavily from a multitude of genres, forming a Frankenstein-esque discography, with a sonic range that is hard to find from any other touring act, let alone any other act who are yet to release an album.

The group’s ethos appears to be rooted in the artistic, intellectual etches of the punk spectrum; with fewer bottles smashed over the head and more of a well-read fascination with the macabre.

Their extra-terrestrial persona and the striking appearance of HMLTD – soaked in a glittery, skin-hugging androgyny – is ingrained in the fabric of the band, but Henry is quick to clarify that they are not a novelty act.

“It all came together pretty organically. As a band, we are a product of our circumstances and our circumstances were a very dead music scene.” The five Londoners saw a void that needed to be filled. “There wasn’t a voice for outsiders and I think that all of us were outsiders. We had a real vision to be this outside voice and to do things differently from everybody else.” 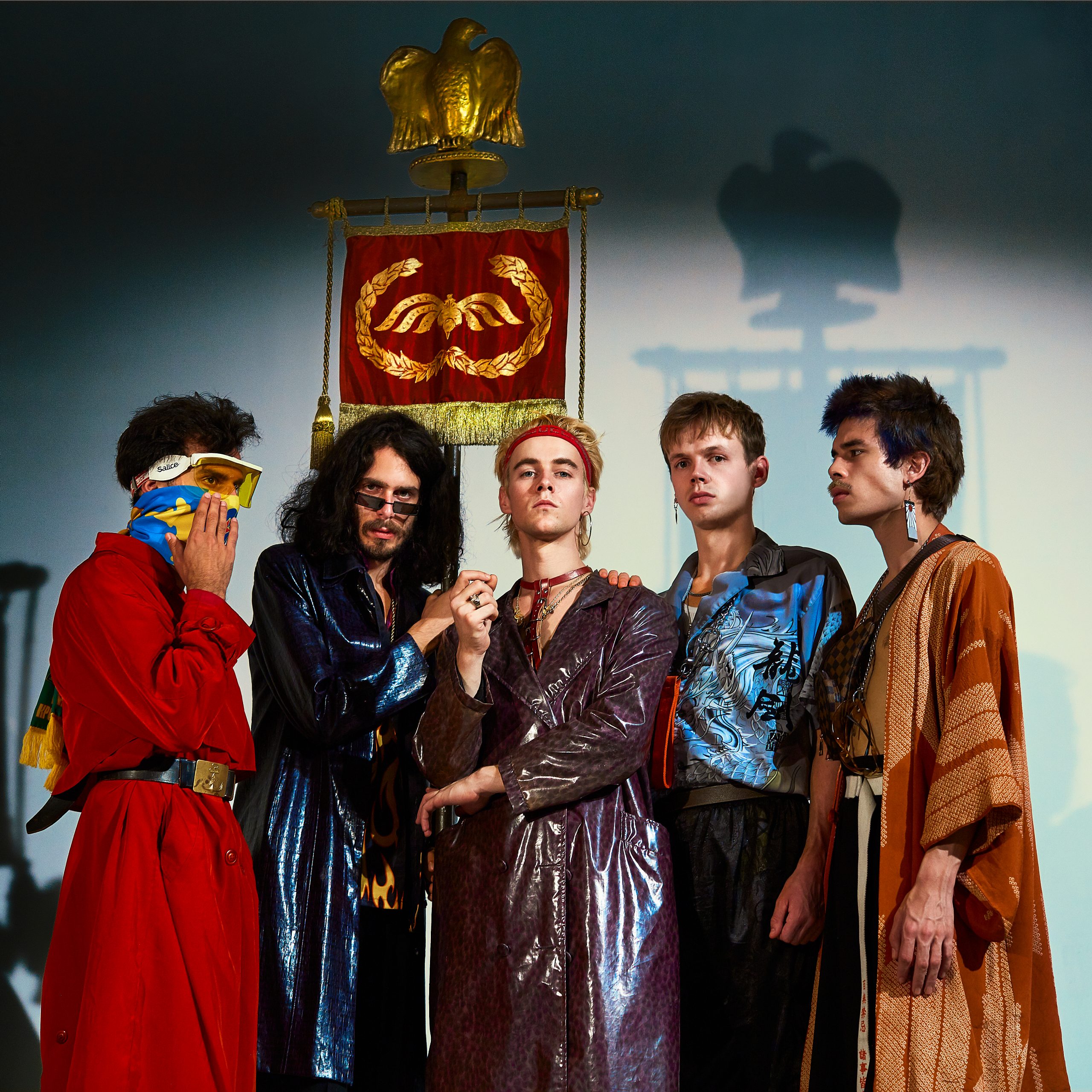 The quintet of university students formed Happy Meal LTD (and were later obliged to change their name, following a legal dispute with McDonald’s). And the project was soon evolving beyond the usual remit of a band. “We sort of realised more and more that this band could be a vehicle, not only for music, but for self-expression of all types and exploring ourselves. I think what’s happened since has been a very extreme exploration of ourselves.”

When reviewing the output created by the band, an extreme exploration of themselves feels like quite an accurate summarization. Each video pays homage to the very edges of the human condition; from the gruesome to the sexual.

One can only assume that it is this interest in the theatrical delivery of music that leads many critics to categorise HMLTD as New Romantic revivalists, a comparison that the group have little patience for.

“It’s very easy for people to judge something on how it looks. And because there is such a lack of flamboyance in today’s culture, there are people who would classify our look as retrospective,” Henry pauses for a moment to compose a mission statement, “what we are really trying to do is bring flamboyance into the modern era. Culture is currently so obsessed with normcore; I think that people looking at us and making comparisons to the past is not only lazy, but cynical.”

Next year, HMLTD will have the opportunity to back their style up with substance, after announcing the release of their first full length LP; West of Eden.

The monsoon of anticipation that surrounded the band in their early days led to a record deal with Sony, which soon fell apart after HMLTD began to feel alienated and disenchanted with their new working environment – resulting in an aborted album and the cancellation of their record deal. Henry reflects; “For a small period we became quite confused about what we were doing and what we were trying to say, which was eventually resolved after they dropped us.”

With a roster that boasts Beyonce, James Arthur and the Backstreet Boys. It is easy to say in retrospect, that Sony was not the most fitting environment for a band with the artistic ambitions that HMLTD harbour.

In the wake of their split from a major label, the quintet needed time to reassess what they wanted to achieve with the venture and re-establish who they were as artists. This led to them penning a deal with indie label Lucky Number – a process that Henry tells me has benefitted the album infinitely.

“The album is centred around a narrative thread, so that keeps each track appropriately linked to one another, which has resulted in an album that is sonically eclectic, but one that is narratively and lyrically coherent.”

After such a long journey to reach their debut album, and a brief dalliance with a major label, what do does ‘success’ look like to a band who not only harness, but personify the peripherals of society?

“This album is already a success,” Henry tells me with a breezy self-assurance, ‘because I’ve listened to it and I know it’s great.’

Sony may play host to some of the biggest artists in the world, including George Ezra and Mariah Carey, but how many camera-trained gimps do they take on the road? None, the last time I checked.