I think it’s safe to say that indie pop has been going through a transitional phase in recent years. Many guitar-led groups now opt for synths and texture, rather than the radio-ready four chord hits that shaped a generation of young tastemakers, many of which are now relegated to the category of wedding singalongs and karaoke classics. The indie-pop subsector that just a decade ago reflected modern youth and – dare I say- a little bit of edge, has undergone a self-aware adolescence and, for better or for worse, the genre is quite an unrecognisable version of itself, when compared to it’s glory years.

These evolutions in music trends are attributed to many factors; fashion moves on-skinny suits and guyliner [probably for the best] was no longer a symbol of rebellious counter-culture, with streetwear becoming evermore prevalent around the trendy corners of London.

Socioeconomics also play a large part in a musical landscape, with growing tensions between classes, through widespread gentrification and a Tory government, allowing art to flourish from the working classes and grime took on the mantle to become the voice of UK youth.

Grime has been a cultural phenomenon and the new wave of darker, or more synth-led indie outputs have fruited some era-defining groups, such as The xx, Alt-J and the modern poster boys of pop-infused indie, The 1975.

But is there ever to be a resurgence of hi-hat-heavy, three-minute tracks about lovelorn teenage anecdotes and inoffensive, festival-ready singles for the masses? If we are to use the fashion world as a barometer for trends, then it would appear so, as Paris fashion house Céline have recently named Hedi Slimane as it’s new creative director. Slimane is the man that pioneered the look that dominated indie culture of the early 2000’s; skinny suits, trilbies and distressed leather jackets could all be featuring on runways in the near future and this resurgence in style will need an equally noughties-soaked soundtrack.

Fewer acts have captured the echoes of that time more so than Sea Girls. The four-piece hail from Leicestershire & Kent, now operating from London.

“We knew each other at school, before we all went on to different universities”, vocalist Henry Camamile explains, ‘ I used to play in a band with our drummer Oli… he was always in another band with the others and we were all friends. So once I came down to London, it just made sense to start playing together.’

“Both groups lost their drummers at the same time”, Bassist Andrew Noswad expands, “so Oli learnt the drums purely for Sea Girls. We auditioned one drummer, before Oli said “I could probably do this”, he was a natural straight away, Oli’s by far the most musical one in the band.”

After their chance formation, Sea Girls toured and produced music immediately, with their debut EP, Call Me Out, arriving in June 2017.

“That only came out last summer?”, Andrew asks in confusion, ‘that’s crazy, so much has happened since then, it feel like years ago.”

The Bassist’s disorientation is forgivable, as the debut release caught the attention of BBC Radio 1 and several festival bookers, allowing the group to pick up momentum towards the end of 2017.

National radio exposure must surely be an early cornerstone in the genre’s resurgence into the mainstream, especially with the backing of tastemakers such as Annie Mac & Huw Stephens.

Also on the list of supporters are the NME (whose very mention conjures sentimental nostalgia towards the glory days of indie-pop), the magazine placed Sea Girls on it’s list of 100 essential new listens of 2018, alongside similar acts such as Rex Orange County.

“I think all of the attention brings both motivation and pressure, to be honest, it’s great that people are paying attention to what we’re doing. But the motivation definitely helps, the band has really snowballed for us.”, Andrew reflects.

Andrew himself agrees that 2018 has a lot of musical promise elsewhere, ‘I’m seeing Rex Orange County soon, I’m looking forward to that, he’s awesome. I think I’m watching Sigrid too in Bristol, I saw her in September and we already know that she’s going to be massive in 2018.’

Sea Girls are currently midway through a headline tour of the UK, in support of their new EP Heavenly War, before embarking upon a tour with The Academic throughout spring 2018.

So how do the group feel about a possible resurgence in indie style?

Henry looks excited by the notion; “The four of us still live in that time anyway, so that suits me. We fucking love indie music, that’s why we play it. It’s never going to be properly gone.”

Henry & Andrew both go on to reel off names, such as Bloc Party, The Killers, Bombay Bicycle Club & The Wombats as acts that first drew them to music. Perhaps, when you consider that many of these acts are still touring and making music whilst the generation that they inspired are now on the scene themselves, this indie revival isn’t quite so farfetched?

But are there any indie trends that ought to stay buried in the 2000s?

Henry considers the idea, “I can’t recall any awful looks from that era… Or is that our look? Maybe we are blind to it!”

Andrew comes to his bandmate’s aid, “Do you remember those Topman Tees- the ones with the buttons in a Y? Those were pretty bad, they can stay in the 2000s.” 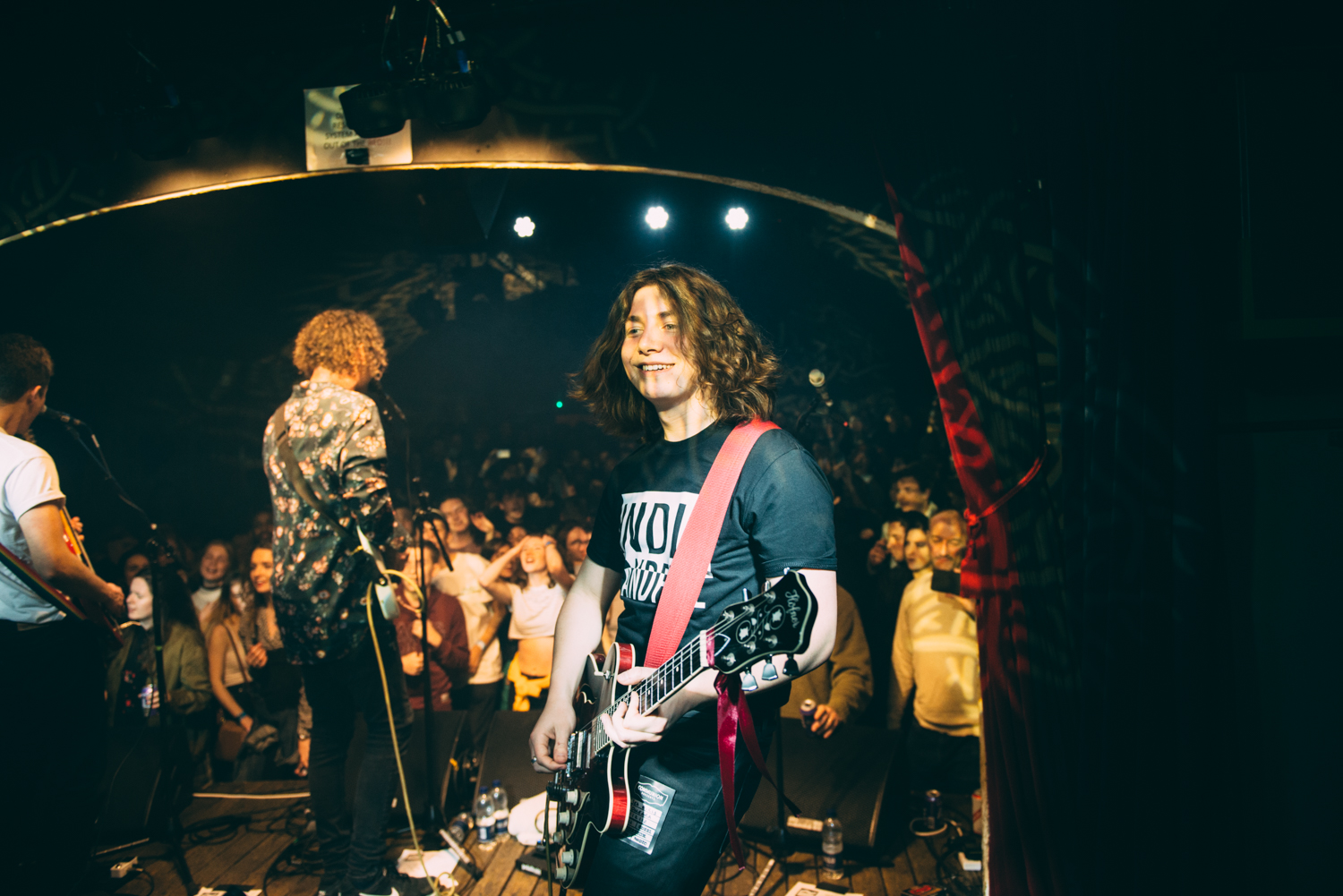 It remains to be seen whether Hedi Slimane will, once again, reshape how the next generation of music consumers will style their wardrobes, playlists and lives, but there is no doubt that pockets of resistance already exist, waiting for the call to arms.

The bassist concludes, “The sound that we produce might not be as popular as it has been in the past, but there are obviously loads of people who still love the sound of indie-pop and I can see it making a return”.

Moments after we finish our conversation, Sea Girls stepped on stage to play a sold-out show at Omeara, and whilst watching the young crowd sing along to song after song from the band’s setlist; it is hard to disagree that this sound still has a place in the not-so-distant future of music.

Tagged with: call me outfeaturefeaturedfeaturesInterviewomearasea girls