Two weeks ago, the Oxford natives surprised fans by announcing two special shows in Manchester and London before they head across the pond to tour for the first time in two years, despite not having an album to promote. After the band’s drummer, Joe Seaward was seriously injured in a cycling accident in 2018, in which he suffered a brain injury and broken leg, the band canceled their summer tour. During the concert, frontman David Bayley told the audience the drummer is “even better than before” after Seaward had to relearn how to walk, talk and read again. Watching his performance, it’s safe to say he’s made a full recovery.

“It feels good to be back,” Bayley announced before kicking off the night with the band’s newest single in four years, ‘Tokyo Drifting.’ Bayley’s high energy and erratic dance moves got the crowd warmed up as he boogied in bright green smoke, his arms flailing around to the music.

There’s something in the water in Oxford, which has bred some of the UK’s top indie bands, including Supergrass, Radiohead, and Foals. Glass Animals are one of the latest to hail from the City of Dreaming Spires since forming in 2010, creating a “peanut butter vibe” of synth-pop vocals and hypnotic, R&B beats that earned the band almost four million monthly listeners on Spotify.

After an energetic opener, the band switched back and forth between playing songs from their debut album Zaba and sophomore album How To Be A Human Being, playing radio-hit ‘Life Itself,’ ‘Black Mambo,’ and ‘Hazey,’ amongst other favorites. Halfway through the set, Bayley pauses. “I’m only hesitating because I want to play some new shit,” he tells the crowd with an infectious smile. The crowd eggs him on and the band plays a new unreleased song, ‘Tangerine,’ in an orange hue. The audience nod along, vibing with the new track as they sip on beers and brush shoulders in the tiny space.

When the new track finishes, the familiar, psychedelic pop introduction of the band’s 2014 breakout single ‘Gooey’ repeats over and over. The stage dims and the band’s frontman has swiftly moved to the back of the venue, standing on a crowd barrier for the first half of the song, singing “I come close / Let me show you everything I know,” in an alluring falsetto. He makes his way back to the stage, cutting through the crowd to finish the song before asking, “Shall we do another new one?” This time it’s ‘Your Love (Deja Vu),’ giving fans a taste of what to expect on their forthcoming album. 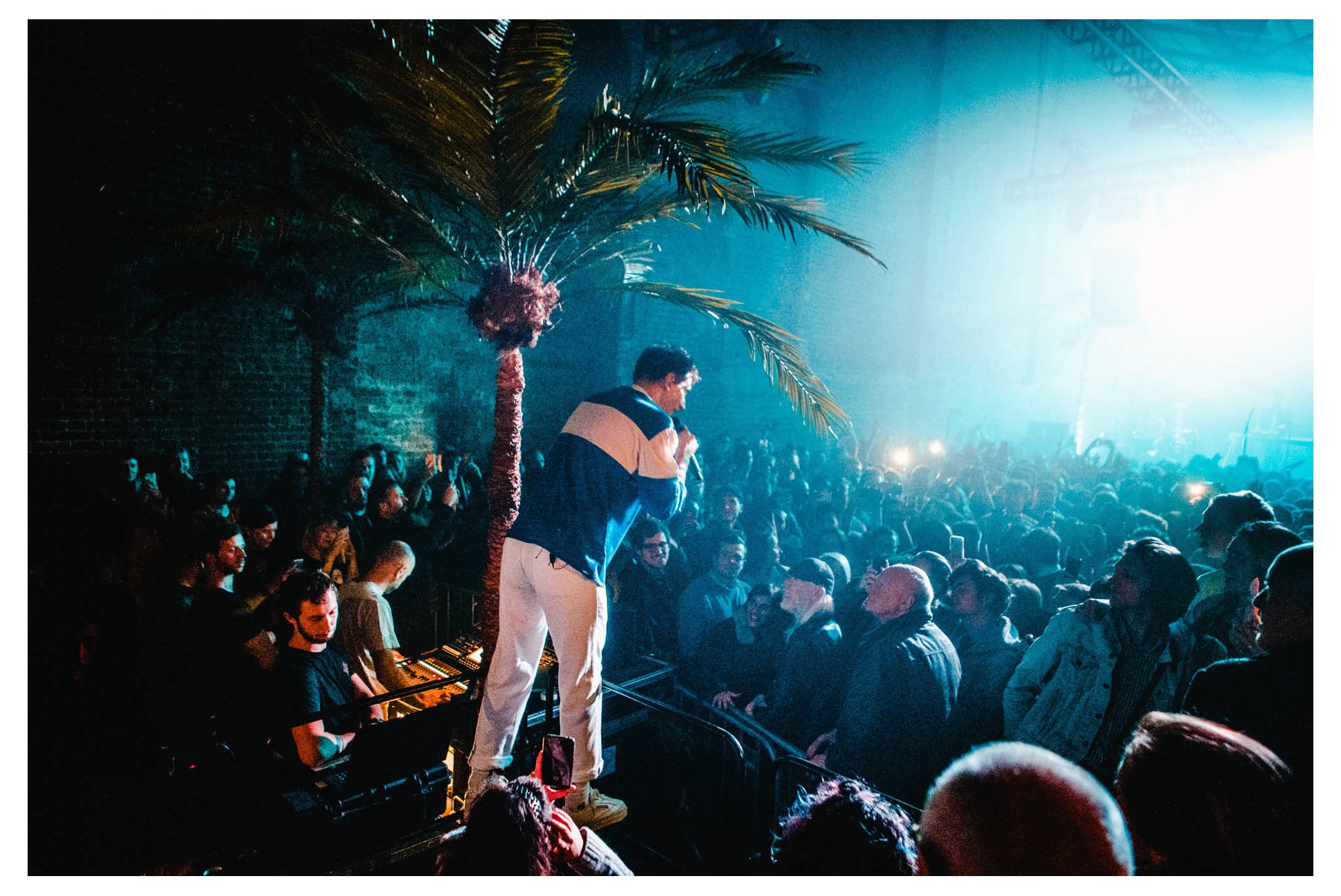 “This is special because I only live down the road,” Bayley shares, telling the crowd he’s excited to sleep in his own bed. He promises new music soon and that the band is planning to record “maybe next week.”

The final songs in the set are strong, as the band plays ‘Season 2 Episode 3,’ a track that sounds like a Super Mario Bros game mixed with warm and woozy beats, followed by fan-favorite ‘Youth.’ They finish with their most emotive and ballad-like tune, ‘Agnes,’ before heading off the stage.

The band had one last surprise for the audience as they led the encore with a cover of Gnarls Barkley’s ‘Crazy,’ bringing a unique twist on the nostalgic tune with rich and smooth vocals.

When the song finishes, Bayley holds a pineapple over his head, referring to the lyric “pineapples are in his head,” and the indie-quartet finishes with the oddball and addictive tune ‘Pork Soda.’ Bayley wipes away the sweat from his forehead and hugs his bandmates, clearly exhausted from entertaining the crowd and leaving it all on the stage.

“Guys, it’s been a pleasure to be back on the stage again, we’ll be back soon,” he promises, and like that, the tropical party is over. Glass Animals proved they’re just as strong as ever before, and fans are clearly ready for the band’s next chapter, whenever that may be.