On the sixth date of their 2022 UK tour run, American indie-pop trio haul their momentous discography up to the rainy streets of Newcastle, their uplifting and powerful tunes providing shelter to those who forgot to grab their umbrellas on the way out – rest in peace to those who chose to use the cloakroom facilities tonight.

Before that all unfolds, though, RuPaul’s Drag Race UK star turned pop singer Bimini starts the party early, bringing along their throbbing bass, a glamorous aura and frivolous fits to match. Despite only holding three original songs to date, a range of unreleased tracks prove Thomas Hibbitts and their live crew to be extremely effective at delivering dirty club tunes fitting for the murky basement venue they’re taking over tonight. Living their dreams and thanking the fans and band at every opportunity, Bimini is clearly grateful to be on stage in such a welcoming atmosphere; their short, sweaty set features a boatload of covers that avoid feeling cheap by injecting an overwhelming sense of fun.

The hype around MUNA is huge, as shown by their complete sell-out across the nine dates on this live leg. With a thirsty crowding leaning on their toes to see any glimpse of Katie Gavin, Josette Maskin, and Naomi McPherson, the expectations of their performance set a very high bar. Thankfully, blasting out the huge powerpop banger ‘All I Want’ immediately shatters through those standards with a formidable introduction and massive chorus, encouraging fans to embrace an unrestricted version of themselves, whatever that might entail.

Gavin’s lead vocals are impeccable throughout, as a series of explosive and high energy cuts continue to astound. All three artists miss no steps, with an expanded stage band – especially the thrashing and barely visible drummer – adding an additional punch to the already eye-widened ambition of this group.

Extreme sass and cheek are chiselled into addictive melodies that have the crowd bopping non-stop, with cardboard signs (“we came from the Netherlands”) and merch t-shirts in eyesight at every point. The MUNA fanbase might be feral, but they’re also an extremely diverse group – no matter where you look, all you can see is people being themselves: leather-jacketed lads leaning over the bar, queer couples making out on the dance floor; young women letting loose, and proud parents watching it all unfold from afar. The one thing uniting all groups is an ever-present smile, as the celebratory and welcoming atmosphere encourages all to join in. 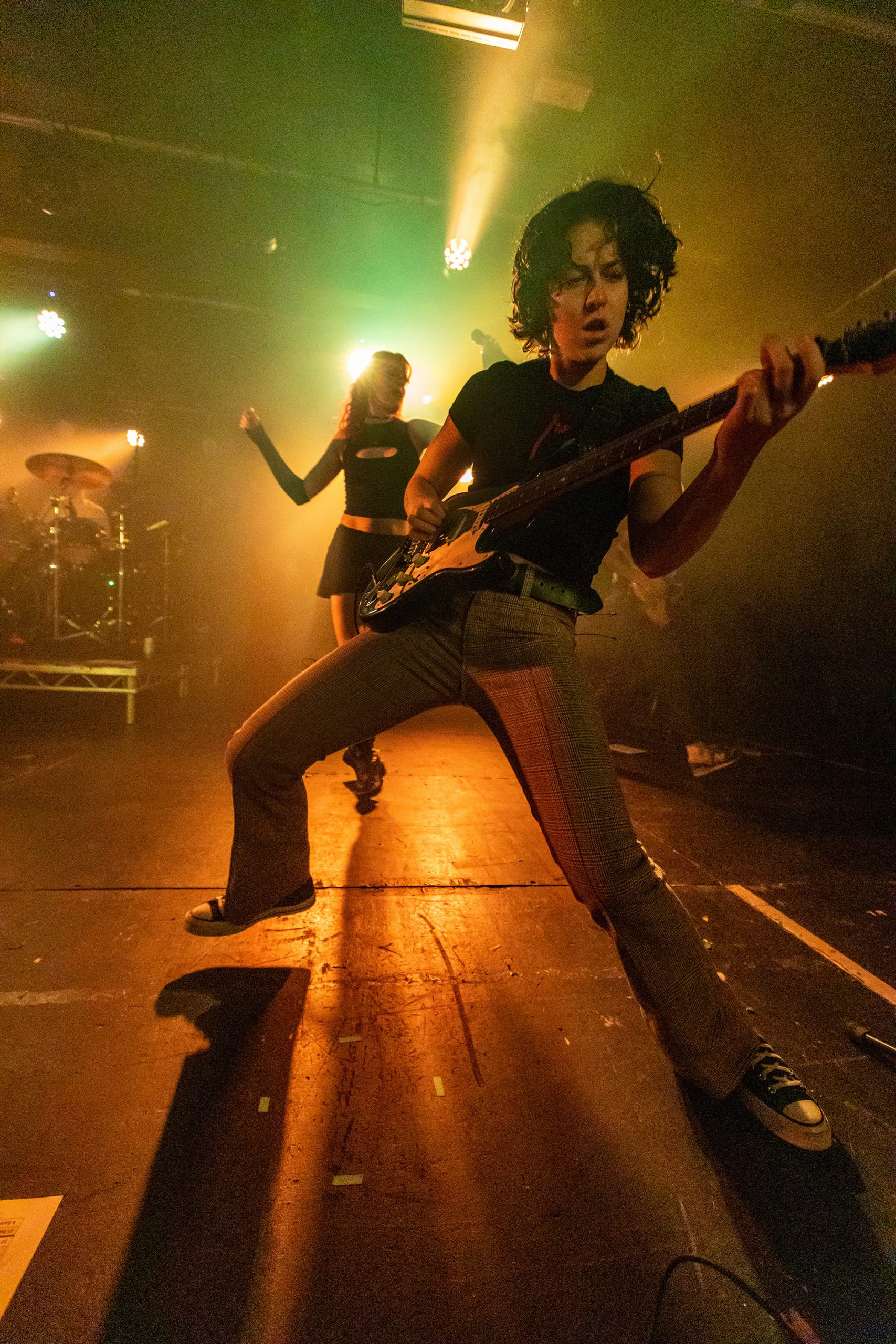 As the trio’s first-ever Newcastle concert continues and some slick guitar riffing joins the effort, MUNA juxtapose bangers from their outstanding 2022 self-titled album with some softer, older efforts. The laidback tones of ‘Navy Blue’, for example, are a welcome addition, although ‘Pink Light’ actually proves to be a more rapturous throughback to 2019’s ‘Saves the World’. Preluding ‘Loose Garment’ with a speech in which she describes their output as, “pop music that wants to talk about weird shit,” the slow-burning song encourages listeners to be kind to themselves: “Used to wear my sadness like a choker, yeah, it had me by the throat / Tonight I feel I’m draped in it, like a loose garment / I just let it flow”.

Proving themselves a must-see act delivering some of the most important songs of 2022, they detour into country territory before bringing the huge percussion back in a major way for a couple of impromptu covers, including a rendition of The Killers’ ‘Mr. Brightside’. The set closer is obviously the gorgeous and rich Phoebe Bridgers’ collab, ‘Silk Chiffon’, although the Saddest Factory Records boss doesn’t quite make an appearance (Bimini returns to hop into those gigantic boots). Reflecting on their meetings as three queers at a South Californian university, MUNA end the performance in as inspiring a way as they opened it; by assuring attendees that touring the world in a pop group seemed an unreachable goal at the time, but people in the Students’ Union crowd can certainly achieve the same goals if they put their mind to it.