Having dropped their sophomore record at the height of the pandemic and followed it up with a film soundtrack rework a year later, The Orielles return to Newcastle and bring to life their vibrant, textured songs from 2020’s ‘Disco Volador’.

Newcastle University’s Student Union belatedly kicks off the new year by once again inviting some Northern guests to warm up the stage first, though. Despite not needing any such protection to remain anonymous here, the city’s own Witness Protection Problem use their heavy post-punk drawl to instil warmth and vigour into a cold January evening. Although a little rough around the edges – and aren’t we all – their members utilise the earthy space to showcase the future potential of this raw and gritty six-piece outfit, with the expansive chaos culminating in the penultimate setpiece ‘Shitstorm’. 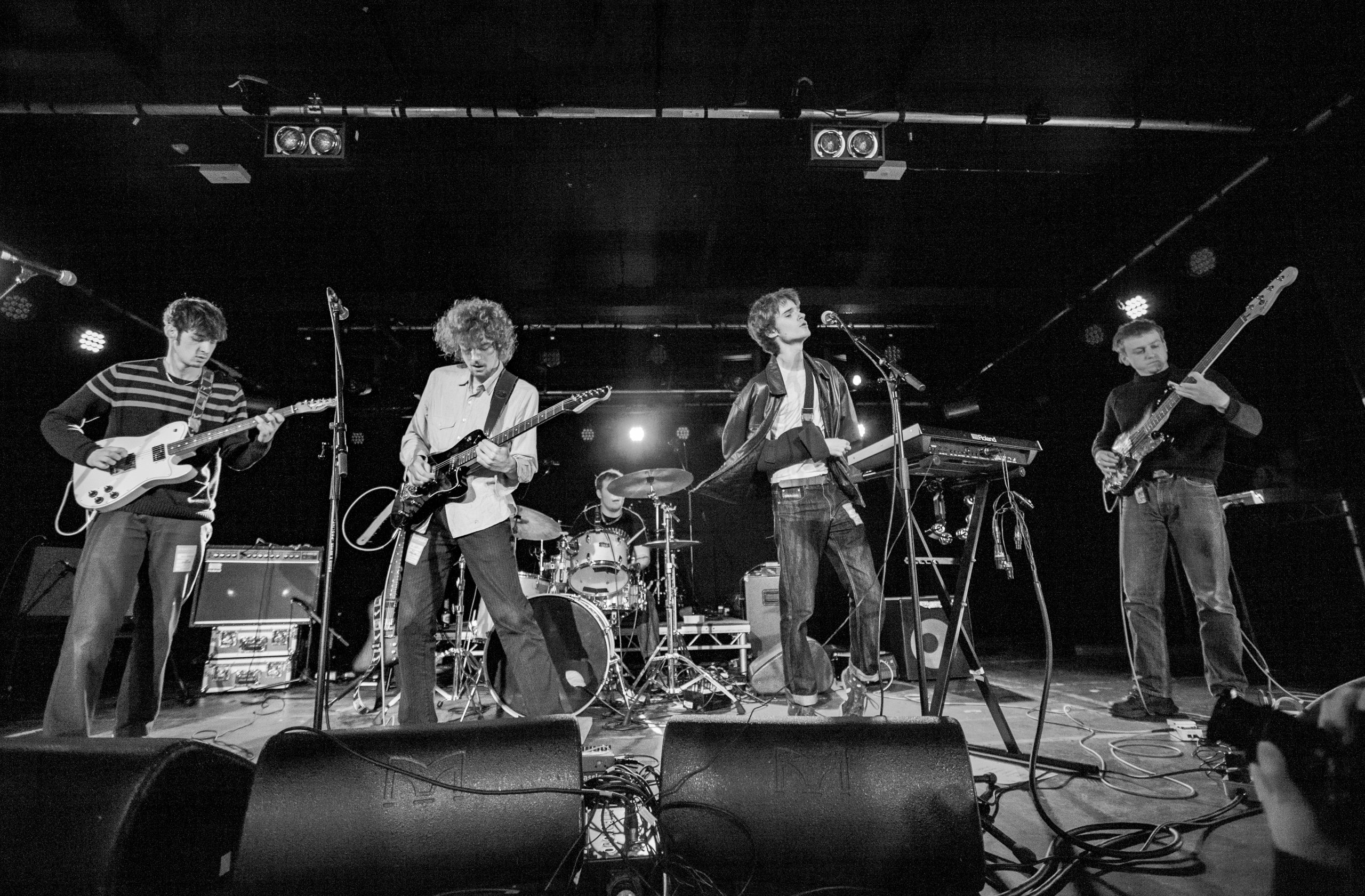 The visually disjointed Yorkshiremen of The Lounge Society follow this up by upping the ante where mayhem is concerned, screaming and howling in front of a pounding instrumental, with a feral frontman seemingly attempting to consume his microphone. The disjointedness doesn’t end there but instead permeates throughout the rest of the quintet’s rambling performance. Flittering moments of enjoyable rhythm are, unfortunately, overshadowed by an exaggerated eccentricity.

When The Orilles waltz on stage to the backing of joyful synths, the tone changes drastically – moving away from reliance on volume, their coherent and focused art-rock style is effective in immediately inducing a more relaxed atmosphere. A bass groove undercurrent carries waves of lucid sonics to danceable heights, although elegant jamming does pave the way for some slower moments too.

A seamless flow is enabled by understated guitar from Henry Wade, and their overall approach to performing is to flesh out a larger soundscape rather than forcefully pushing more obvious and frivolous elements to the forefront. This high-reaching cumulative sound is embellished by dancing keys and, without relying on traditional pop hooks, recent releases merrily dancing along to the driving momentum generated, the audience only cheers louder when it is announced that a third album is not only in the works but indeed finished. 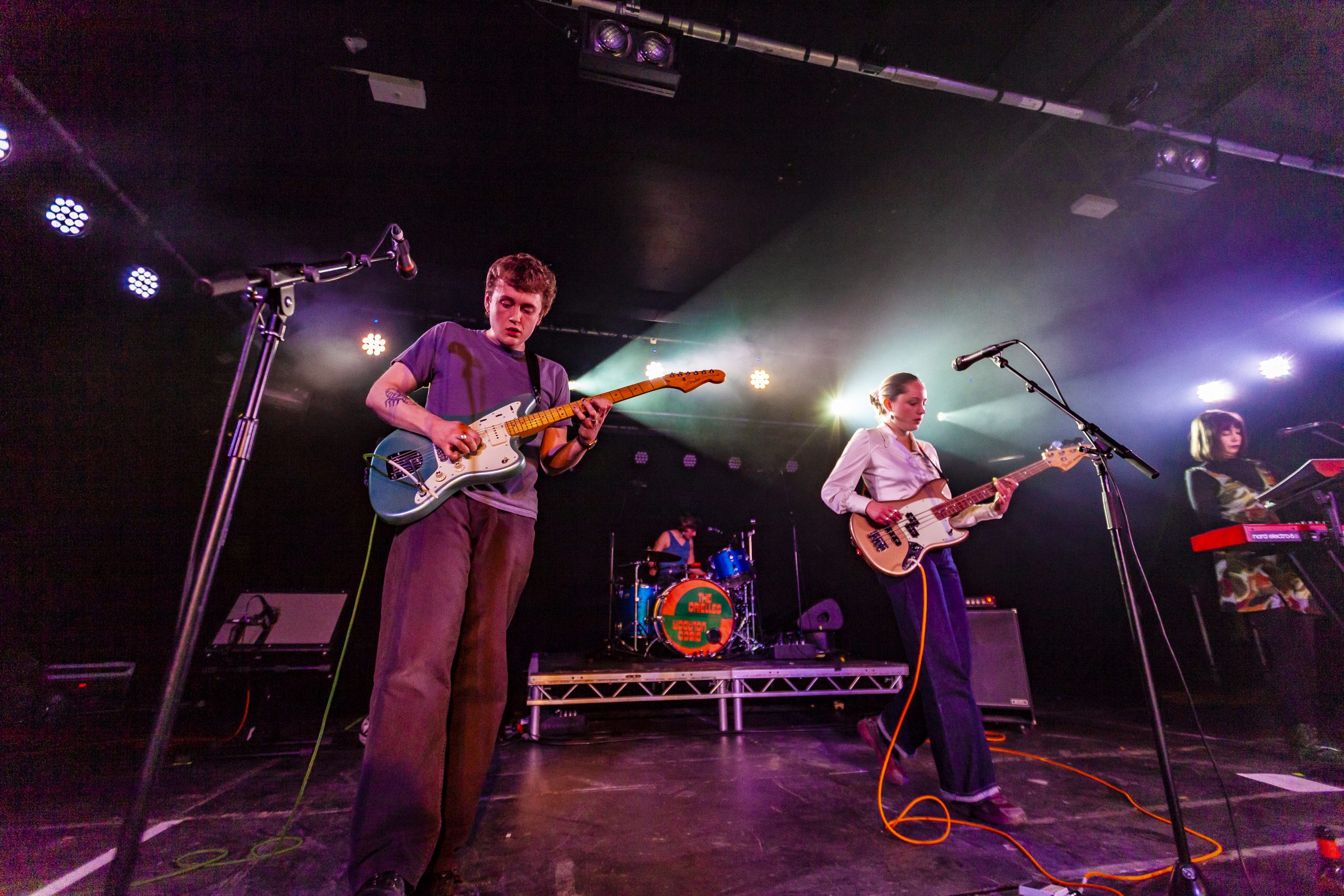 Consistent hooting continues, induced by the seductive and vulnerable swagger led by frontwoman Esmé Hand-Halford who uses a vocal style that further adds to the intimate mood. Paired with gentle instrumentals that noodle and swell to the artists’ will, The Orielles don’t need a flashy stage to inject colour into an otherwise blue evening. ‘Bobbi’s Second World’ – another hit from ‘Disco Volador’ – earns the vocalists a crowd-funded pint and, despite occasionally abrasive keys, an undeniable groove takes over the room.

Perhaps their most definitive song to date, old(ish) hit ‘Sunflower Seeds’ peaks the set with an aura of instant recognition, providing a great example of the band’s ability to swell and deflate energy levels through the tracks structured segments. Smart, delicate, interesting and fun throughout, the Halifax outfit gradually fade the volume to a well-earned close with the promise that this isn’t the end of their tenure in the North East.