In a year of what seems like one long, relentless tour for the Leeds post-punkers, Yard Act have returned to Newcastle for the second time in 2022 for a headline show at the city’s finest university basement. A crazy amount of energy surrounds the group, as the band have gone from playing barely above eye level at The Cluny to having rabid fans prying for a closer glimpse at NUSU in just a few short months.

Before the venue completely fills up, cultural agitator Adrian Flanagan takes to stage with his latest escapade, Sheffield’s Acid Klaus. Making an unprofessional but nonetheless charming entrance, the set immediate cuts in with autotuned banter before unleashing his self-decribed “body music” upon the steadily growing crowd. Dissatisfied with the initial bass levels, they are soon ramped up to room-quaking levels as the eclectic-slash-completely-bonkers four-piece make their way through their recent debut album, ‘Step on My Travelator: The Imagined Career Trajectory of Superstar DJ & Dance Pop Producer, Melvin Harris’. Not so succinctly named, no, but the joyful narrative unfolds with deep beats, rich bass, and distorted vocals – goofy and obnoxious in the best way.

The crowd is nice and warmed up, finger guns already blazing away, by the time Yard Act make a delayed entrance. The band play out an elongated jam – as if ticket holders haven’t waited long enough, with tickets being sold since February – but the wait pays off beautifully. Frontman James Smith slinks on stage and pops right into a flurry of ‘Pour Another’, ‘Dead Horse’, and ‘Fixer Upper’; huge instrumentals, formidable moshpits, and a breathless vocal showing brings the room to life.

Smith’s glasses soon begin to fog as he leads the charge with an animated performance, cultivating a dark groove between the four band members and they accompanying keys player. A Ted Baker jacked is thrown over the barrier to much jest, but bassist Ryan Needham can’t keep it on for too long amidst the sweaty chaos.

‘Payday’ proves one of the easier tracks to grasp, with “take the money and run” being belted as if from one voice. In truth, though, the entirety of the Mercury Prize-nominated debut effort, ‘The Overload’, is surprisingly absorbing; detailed and snarky social commentary is as sharp as it is genuine, and the narratives that unfold are penned to huge-sounding backing instrumentals. Darting back and forth between rattling verse and explosive chorus, there’s rarely a dull moment in a Yard Act show.

The elongated rendition of ‘Tall Poppies’ provides the nights most pensive moment, perhaps the best evidence of the group’s ability to spin ever-flowing lyricisms into an idea everyone can relate to. “I’m hugely proud of our fanbase,” Smith smirks, “it takes a lot to understand what I’m saying” – despite the fatigue of his mouth movements potentially backing this up, the underlying concept of a man whose view is restricted by a small-town mind-set is hardly far-fetched difficult to envisage. 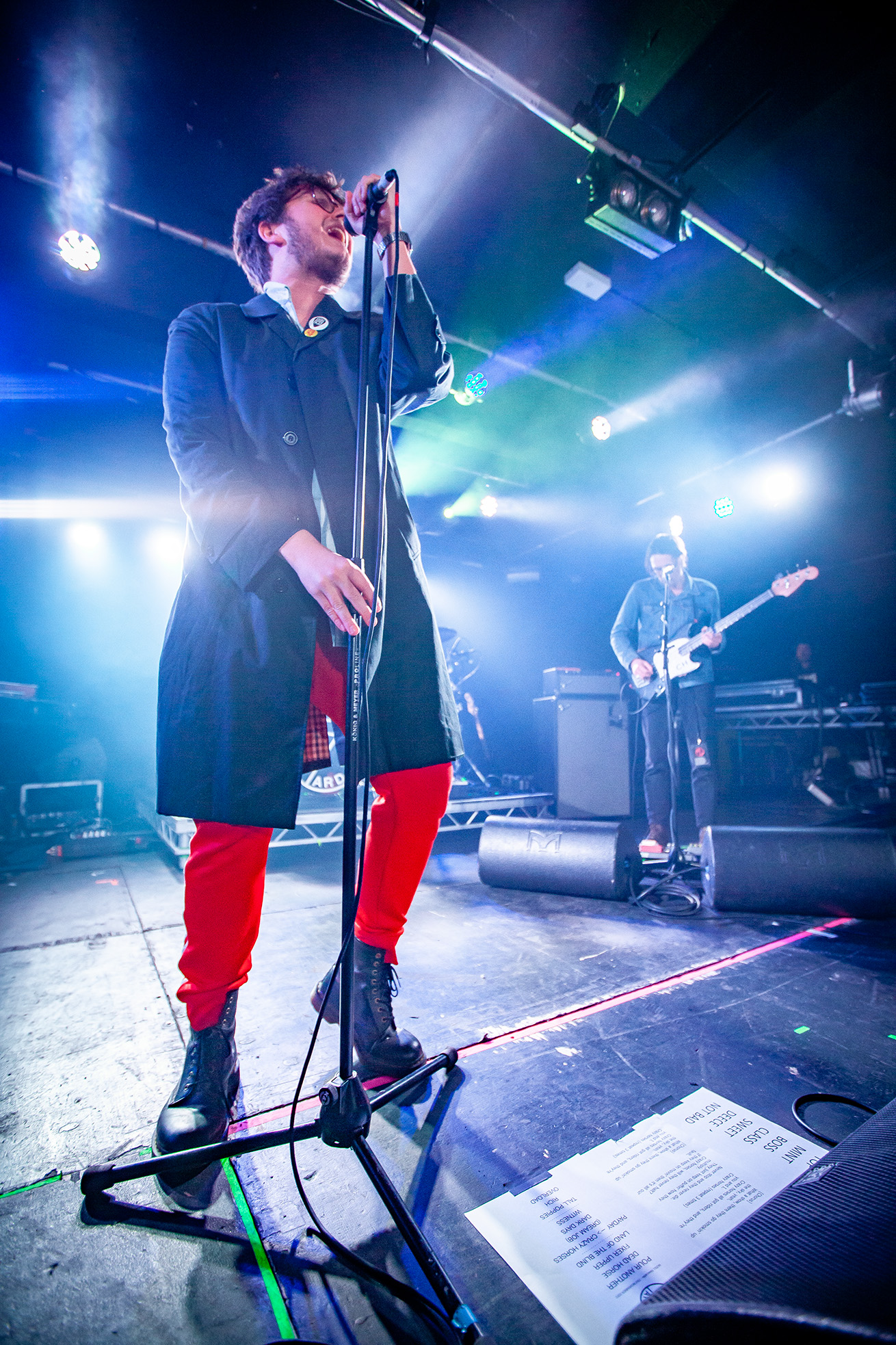 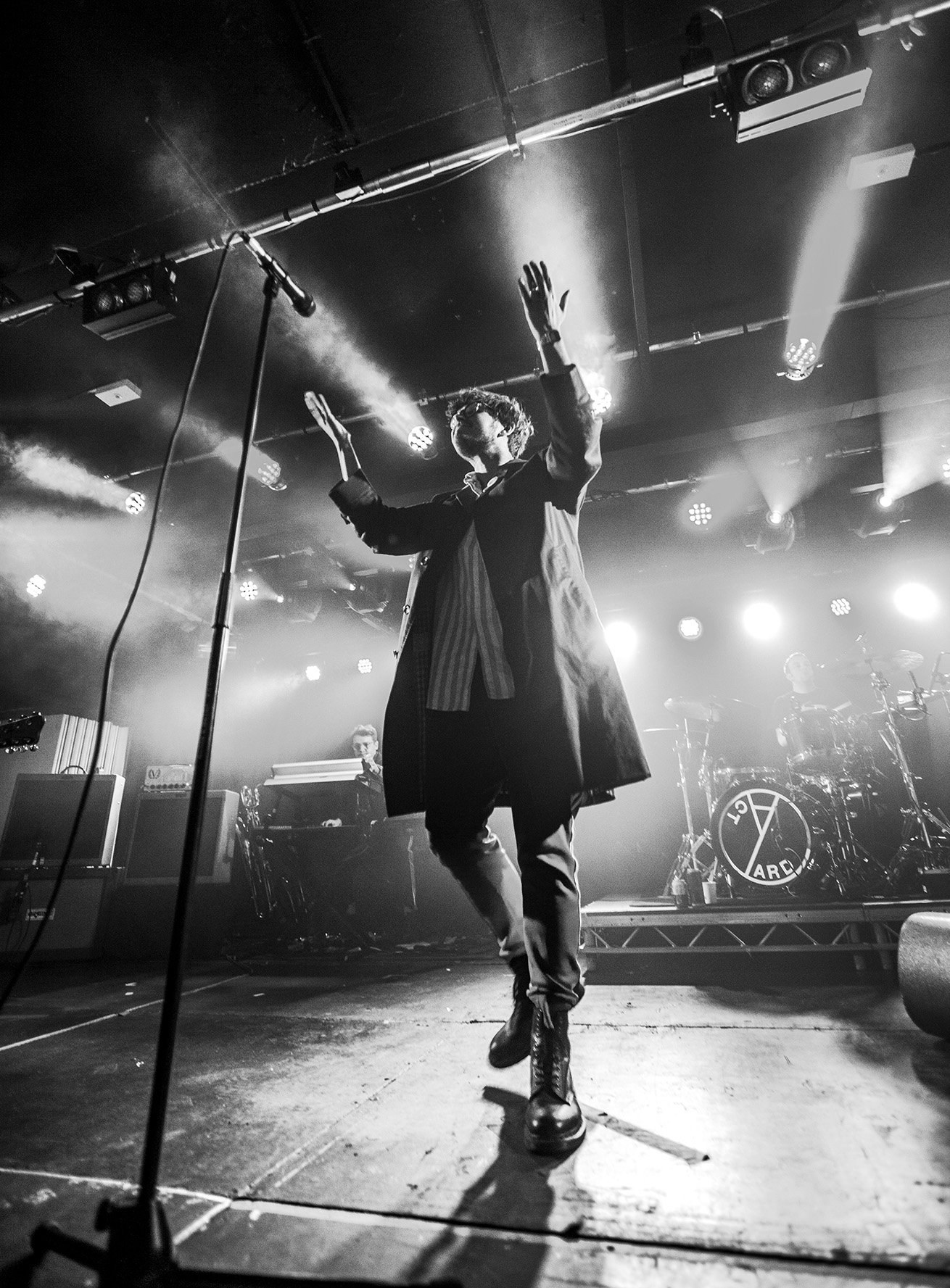 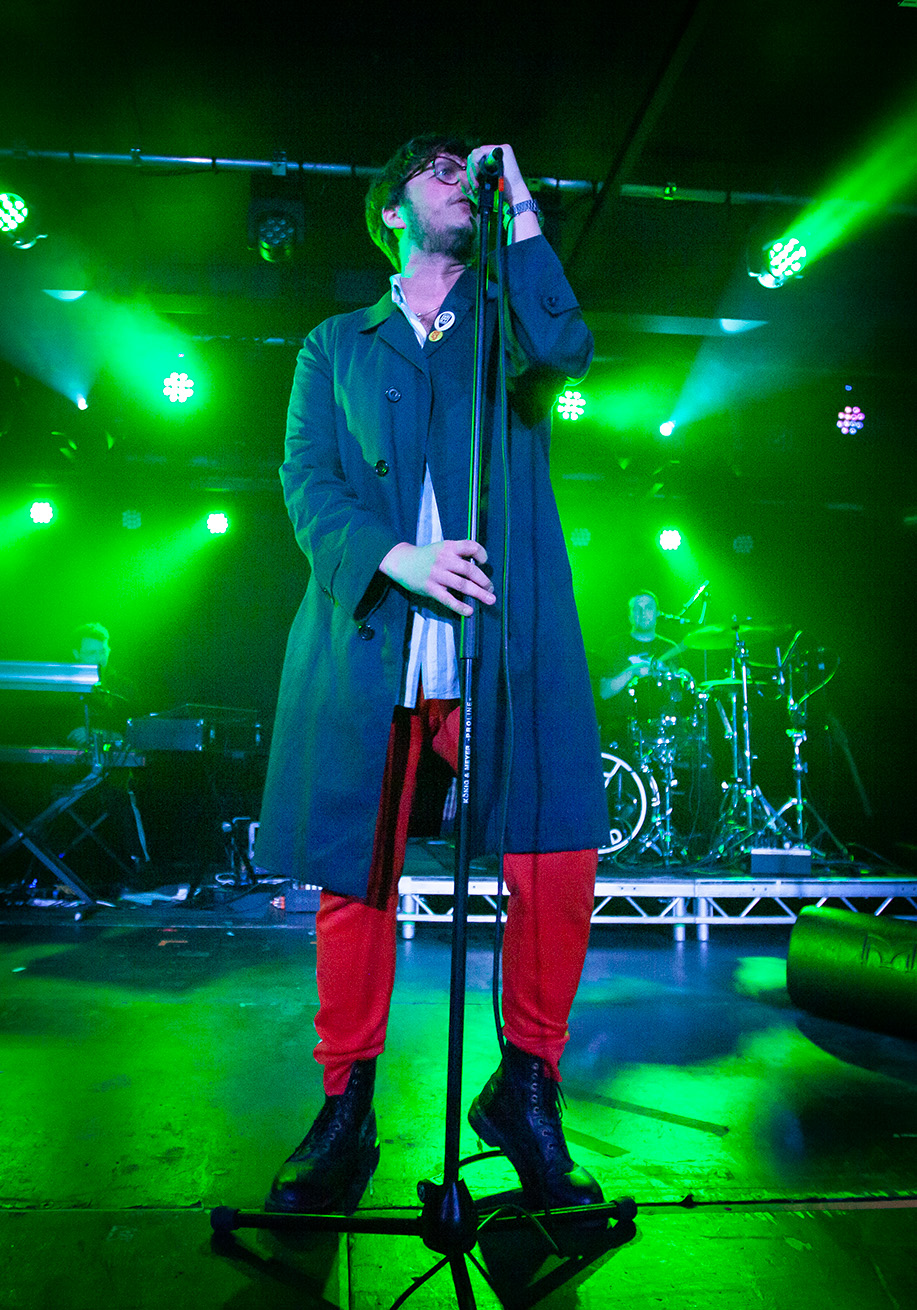 ‘Rich’ then blurs the lines between the singer’s own train of, though, as he debunks the completely misconstrued of bands having excess wealth while living a life of relaxation before the songs original words even kick in. Transitioning out the bombastic title track and suppose closer, the band promise that only a sufficient amount of “skin on skin action” (clapping, obviously) will get them back out.

Fortunately for all, they are very much the kind of act to receive such a response. A heartfelt ‘100% Endurance’ is dedicated to the recently deceased Wilko Johnson by guitarist Sam Shjipstone, offering a sweet albeit existential embrace of the pointlessness of life, before ‘The Trapper’s Pelts’ give punters “one last chance to boogie” – or more accurately, one last chance for the moshpits to collapse. Thank God for that security barrier, huh?

Yard Act clearly display the hard-fought live chops to back up their universally acclaimed writing abilities, which is a feat in itself bearing in mind how exhausted the four-piece must be after never ending live dates. Still able to muster the seething strength these tracks demand, Yard Act gift catharsis to those who stumble in tonight.