Tokyo-based Electronic group WAKON was born out of creative collective DENTO (founded by Creative Director & DJ Sadamasa Yamanaka). They are now on the path to notoriety for their ability to express culture and identity via catchy music.

In April 2019, a disguised Japanese group “WAKON” appeared out of DENTO with a theme of expressing their identities as Japanese artists and people through electronic music. A year down the lane, in April 2020, the group has released debut single ‘Tokyo Is Dying.’

In a fascinating conversation filled with wisdom and cultural titbits, the group delve into the important message of their single, overcoming racism and Shinto.

What is the message and/or inspiration behind ‘Tokyo Is Dying’?
It raises an issue in Tokyo which people here aren’t even concerned about. We seriously think its grave issue. Here’s the message:

Tokyo is dying. Having gone through 30 years of economic stagnation, Tokyo is still fettered by commercialism and globalism, and repeatedly destruct and create. Nature, culture, tradition, scenery, sentiment, humanity, affection, and laughter disappear day by day. Music is no exception. Moreover, 2020, which Tokyo gives its all to, is being threatened by the new virus pandemic. Tokyo can’t die.

How would you describe your sound? How do you hope it evolves in the future?
We’d describe it as ‘Shinto.’ Based on Shintoism, Japan has formed its original culture by fusing different cultures with conventional one, and then Japanizing them in a way. Today, we are doing the exact same thing through music. We’re trying to create new culture.

Tell me about WAKON’s journey as artists so far – the good, the bad, the okay?
It’s been a year since our journey started, and we can’t say it was all good. Although being glad that we had a lot of opportunities to perform with some prominent young artists who have been standing out in the youth culture scene of Tokyo, we’re not satisfied with the result yet. However, it was still good we were able to be united with fellow artists who can share our vision, and fans who support our music.

We are thankfully starting to get attention from overseas now as well, so are aiming to be more and more connected with the world in our second year as a band.

What’s one message you’d like listeners to take away from WAKON’s music?
We want listeners to be cherish their own identity and culture and respect others.

Who are influences and who inspires you?
Daft Punk is our hero. Aside from that, Takashi Murakami, Peggy Gou, Mura Masa and Kendrick Lamar inspired us a lot.

What would be an ideal or dream future for the band?
We want to become a symbol of cultural diversity through cultural integration.

We feel kind of awkward about the current situation of mass consumption of works mass-produced and exported by excessive globalism without regard for the good parts of own culture. Because of this, various cultures around the world are in danger of disappearance, and we personally think it may be one of the causes of the discriminatory discourse. We want to be the catalyst for the movement of changing this situation.
We have huge respect for the house music scene which was created by the African-American community before it evolved in the music and culture scene in Europe. We’ve been into house music for a long time and influenced a lot both by its sound and philosophy.
What we are trying to do is to add the essence of our own identities and culture to house music and create a new culturally integrated genre of music.

What we want to convey to the world through this activity is that new cultures can be created through the interaction of various cultures, and new possibilities will be opened for those new cultures can enrich the hearts of those who enjoy it. By spreading this idea to the world through our activities, we would like to realize a culturally diverse world where everyone can respect each other regardless of their race and origin.

If you could collaborate with any artist in the world who would it be and why?
A collaboration with Daft Punk is one of our dreams. It’s literally just a dream.

Are there any particular countries in the world you want to spread your music to?
We particularly want Westerners to listen to our music. We feel they, especially French and British people, are conservative and at the same time progressive, which makes them have a great cultural diversity.
We also want to deliver our music to people in other Asian countries and other regions under the pressure of the excessive globalism to inspire them to create new cultures through cultural integration.

What is the biggest challenge you’ve overcome as a band and as individuals?
We all have some experience being discriminated against as an Asian. Coronavirus is manifesting as racism against people who are of Chinese and Asian people.

Meanwhile, it is clear that success in the music industry as an Asian requires comparatively a high level of talent. We personally felt that the looks of Asian actually plays a negative role in challenging the world music industry.

By wearing the masks symbolising the looks of Asians from Japanese traditional performing arts, we are trying to overcome the above and at the same time show the world our identities as Japanese. 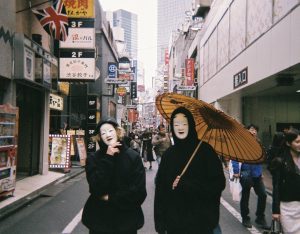 Aside from music, what creative outlets do you enjoy? Do you draw inspiration from any stories around you, art, films, TV or books?
Growing up in Japanese culture, we’ve definitely been inspired by it. Ghibli movies are our favourite. We also draw inspiration from traditional and historical stories such as matsuri, ukiyoe, noh, kabuki and Japanese literature.

What’s been the highlight of your musical journey so far? What’s next for you?
We’re still figuring out who we are and what our music is. In order to establish the genre ‘Japanese House’like Peggy Gou refers to her music as K-House, we keep learning from seniors in order to create something new through our identities.

We also are aiming to be a cultural bridge between Japan and the world. As DJs and producers, there are a lot of talented artists in Japan we want to introduce to the world. With a recent rise of the Asian entertainment such as K-POP and 88rising, we’ll also look to ride on the rising wave and show the world the Japanese entertainment.

If WAKON could be known for one thing in the world (besides good music), what would
you want it to be?
Being known for good mix would be cool. We mix songs, music, cultures, and the times.

What’s the one song that’s most played recently on your personal playlist?
Shinichi Atobe – Heat1