Manchester legends New Order returned to the city on Friday night to play the biggest homecoming gig of their career.

Many a band have tried and failed to reinvent themselves as they get older, to keep up the momentum of their early days and avoid becoming tribute acts to their former selves. New Order are a rare specimen in many ways. Not only did they emerge from the ashes of post-punk pioneers Joy Division to become one of the defining synth-pop bands of the eighties, but they managed to stay relevant and interesting, their sound constantly evolving as the years passed. The group’s Heaton Park show on Friday was a testament to this, as fans of all ages gathered to celebrate the almost half-a-century long career of one of Manchester’s most important bands ever.

Opening with ‘Regret’ from their 1993 album Republic, New Order played to the 35,000 strong crowd like the seasoned professionals that they are. It was their biggest show to date in Manchester, but that didn’t seem to phase them. Stood in the middle of it all, you felt the energy of everyone around you – the energy of thousands of fans who had waited years to witness New Order live in the flesh. Next came ‘Age of Consent’, the standout single from the band’s seminal second album Power Corruption and Lies. The crowd screamed in excitement as the familiar opening riff started up, 60-year-olds and 16-year-olds dancing alongside each other as drummer Stephen Morris delivered the song’s classic staccato rhythms.

Following the more fast-paced ‘Restless’ and ‘Ultraviolence’, the double whammy of ‘Ceremony’ and ‘Your Silent Face’ brought a slower, more solemn feel to the set. Frontman Bernard Sumner picked up the melodica to play the latter’s eerie refrain, and Gillian Gilbert’s atmospheric synths washed over the audience, creating a euphoric blend of sounds. Halfway through their set, New Order played their most recent single ‘Be A Rebel’, released in September of last year. Although not one of their strongest tracks, ‘Be A Rebel’ acts as proof that the five-piece are still highly capable of producing catchy dance-pop songs. And, though it may not be on the same level as their earlier material in terms of its depth or creativity, it still got the crowd moving.

‘Bizarre Love Triangle’ was one of the highlights of the night, with Sumner dancing around the stage and the audience singing along to every word. While New Order performed with a casual attitude befitting such an experienced band, there were moments of humble honesty scattered throughout their set. At one point, Sumner told the crowd that it was only the second show they had played in two years, shouting ‘Fuck Covid’ in a random burst of passion. It served as a reminder that the pandemic has deeply affected everyone working in the music industry — even one of the biggest bands in the world.

The set ended on three of New Order’s biggest singles, ‘True Faith’, ‘Blue Monday’, and ‘Temptation’. The crowd shouted the lyrics to the final song back at Sumner, a chorus of thousands of emotional fans repeating the lines, “Oh you’ve got green eyes/ Oh you’ve got blue eyes/ Oh you’ve got grey eyes”. No-one could quite decide on what colour the eyes were at any given time, with the order becoming more and more confused the longer the song went on. The band left the stage to rapturous applause. 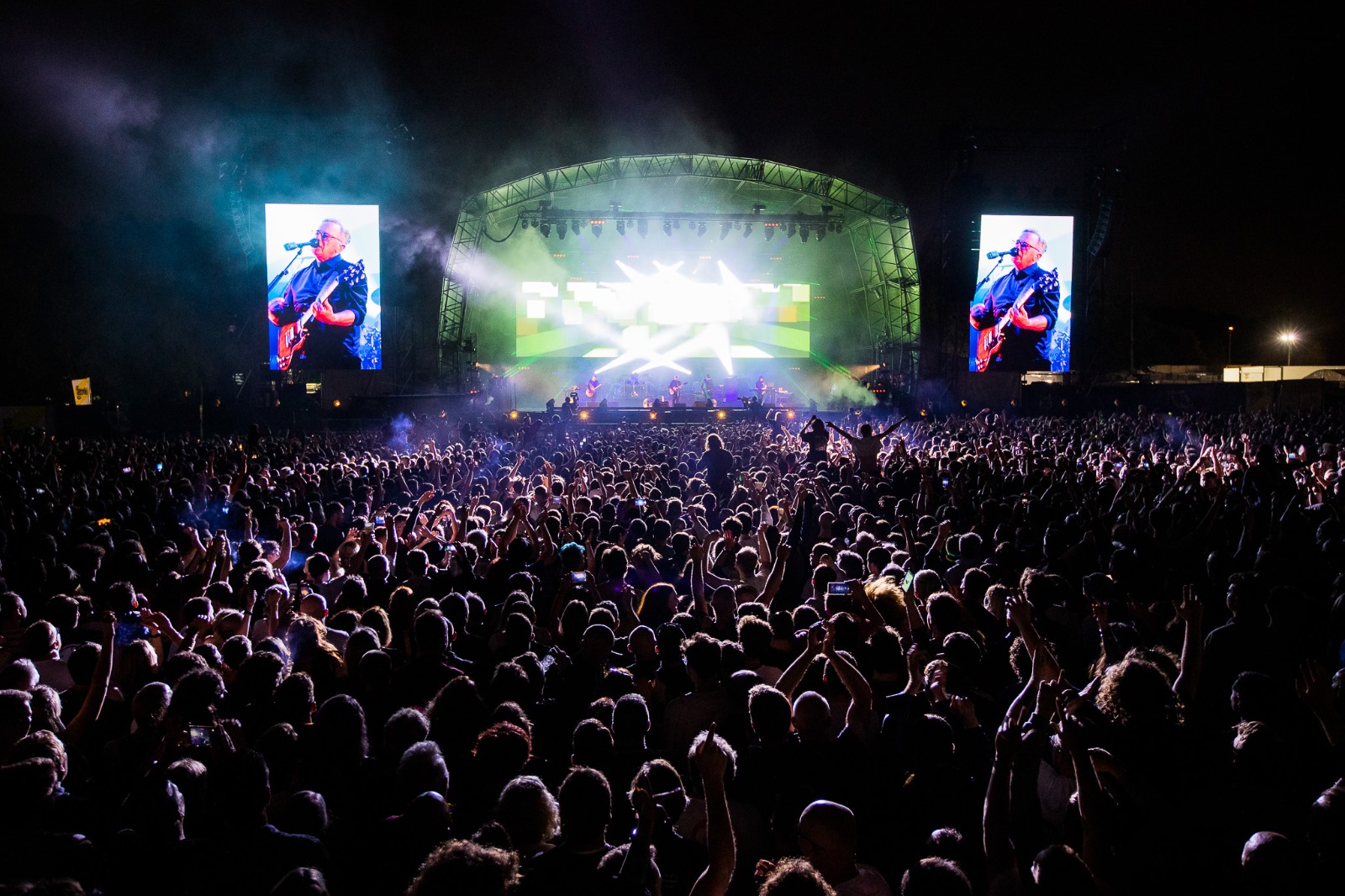 And then it was time for the encore, and you could sense the anticipation hanging in the air. Would they play any Joy Division songs? How many? And which ones? As New Order walked back onstage, it felt like the beginning of an entirely new gig. Everyone fell silent as the band played ‘Decades’, the ending track from Joy Division’s sophomore album Closer, and a blurry back and white video of Ian Curtis came on in the background. The 1979 single ‘Transmission’ followed before New Order launched into the timeless ‘Love Will Tear Us Apart’. Standing in the middle of the crowd, I got the sense that I was experiencing history: not only were one of Manchester’s most vital bands performing a homecoming gig to 35,000 people in Heaton Park during a pandemic, but they were playing the music that Curtis, having taken his own life at the age of 23, could only have dreamt of playing to such a huge audience. Joining everyone around me to belt out ‘Love Will Tear Us Apart’, I felt extraordinarily lucky to have seen such a legendary band perform live in my lifetime.

After holding its breath since the last festival back in 2019, the...

Five acts not to miss at Stockton Calling 2022