From her humble beginnings at Fabric’s third room to curating stages at some of the biggest festivals in the world, Annie Mac has brought some of the UK’s finest acts to light over the past years. As the Radio 1 ambassador for new music, and the station’s primetime host, Mac has quickly become one of the nation’s most powerful tastemakers.

Taking her Annie Mac Presents shows to the next level, the DJ is set to take over nine nights across Camden for a series of shows. From the Jazz Cafe to KOKO, and a closing show at the iconic Roundhouse, Annie Mac is kicking off 2018 in true style.

Running throughout February the shows will see Annie Mac herself headline four shows at KOKO alongside a series of yet to be announced guests. The Jazz Café residency will continue the theme of Mac’s most recent AMP shows, which saw the likes of Wolf Alice play the venue. Running each Thursday across the month, they’ll feature an eclectic lineup of brilliant live acts including Tom Misch, Billie Eilsh, Jessie Ware and Superorganism.

The month-long celebration will end in a massive show at the Roundhouse. Featuring some of the biggest artists from across the AMP series over the years, and some of the most promising up and coming acts, the show is set to be an unmissable one. The secret bill will once again see Annie Mac take the stage, with the rest of the lineup to be announced soon.

With tickets for the first eight shows already on sale, only people who purchase tickets to one of the Jazz Cafe or KOKO shows will have access to purchase tickets for the Roundhouse spectacular. With tickets starting at just £16.50 Annie Mac Presents gives you the chance to catch some of tomorrow’s biggest bands in an intimate space. For tickets head over to the Gigs and Tours website. 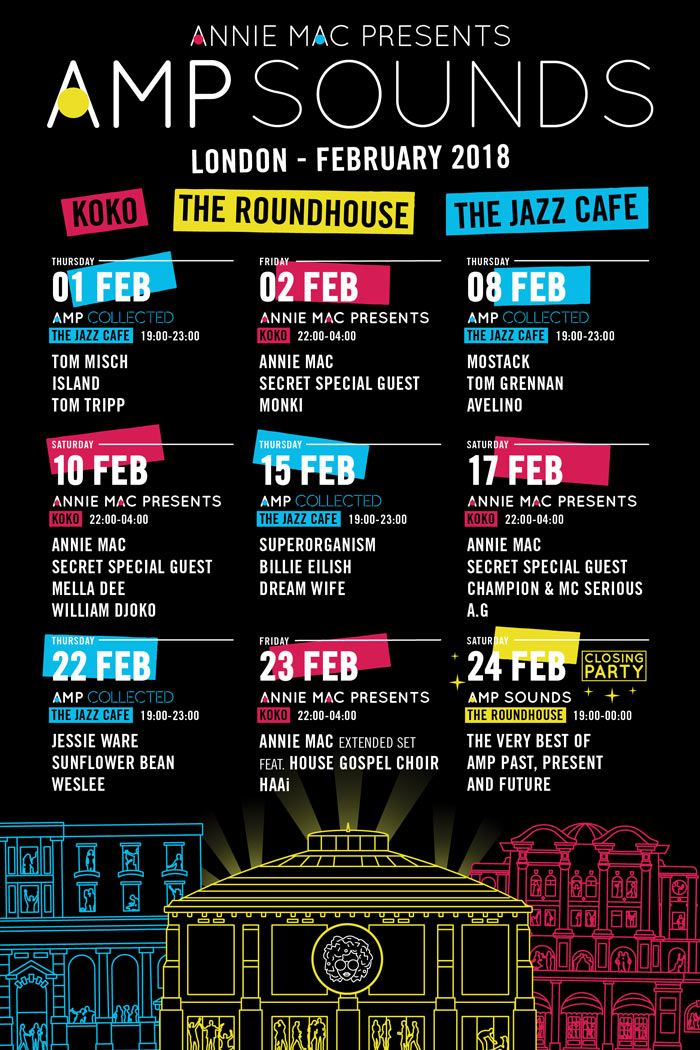 Life is political: In Conversation with M(h)aol

Just over a year since their debut Gender Studies EP, Irish band...

a RI-ku: guns n roses, then.  self-confirmed for glastonbury in the cold...