The Internet is a crazy, weird place that’s somehow magical and informative whilst also extremely damaging mental health-wise. But when you’re part of Gen Z, it’s basically part of your DNA. That’s why emerging “anti-pop” artist Bella Latham, AKA Baby Queen, decided to explore the complexities of the Internet and social media in her debut single, ‘Internet Religion.’

The “Queen of the babies” shows off her powerful, relatable songwriting and catchy lyrics in the upbeat guitar-lead tune. The Internet has been a hot topic in music for a while, but the South African-via-Londoner’s track offers a unique perspective that touches on important issues like body dysmorphia, social media highlight reels, and mental health, all wrapped with a meme-filled and Instagram-filtered video. There’s an angsty undertone that runs throughout the bubblegum pop tune, bringing a much-needed cynical perspective pop music typically lacks. There’s a Matt Healy and Charli XCX-esque quality to Baby Queen’s thoughtful songwriting and overall confidence. With ‘Queen’ in her name, she’s on her way to becoming pop royalty.

We caught up with Baby Queen about breaking into the industry, meme culture, and her love for Taylor Swift.

‘Internet Religion’ is the first song you’ve officially released. What made you chose this song as your debut track?

Internet Religion is a song that I wanted to write for a long time before I actually did. I think I had all these opinions (about society’s relationship with social media and our online selves) that were building up for a while, and when I finally got them out of my head, it felt like a very reflective account of everything I was seeing around me. The message felt, and still feels, really important. I also think that when we finished the song and it went from being a demo to a record, we were like “FUCKING HELL; what is this thing we’ve created?!,” so it had to be the one.

‘Internet Religion’ is entwined with some bitterness you have about how people have to portray themselves in a certain way online and the harmful effects of social media. What’s your relationship like with the Internet now?

Well, I think Internet Religion isn’t so much of a criticism of how other people behave on the internet as much as it’s a narrative of my own relationship with social media. I’m part of the problem. I love the internet. I think it’s incredible and I find our alliance with it to be fascinating – problematic, but completely fascinating. I think my main issue with it is that I don’t know where all of this ends. How photoshopped will our images become? How intertwined will our actual identities become with our Instagram grid? I think as long as we can acknowledge its absurdity and laugh at it in a way that separates real life from this “cyber-life”, we can remain vaguely sane.

How did you come up with the concept for the music video?

We actually had to film the video in the depth of quarantine before any of the lockdown rules were lifted, so we were super limited; but I think it was kind of perfect. A lot of what being online means is being isolated and being alone. The video was ultimately a self-tape, and I really wanted it to be visually exhausting – like total sensory overload. I think when you’re scrolling through Instagram or Tik Tok or whatever, visual information hits you so quickly that you get bored almost instantly. I wanted the video to make the viewer feel the way I feel after spending 5 minutes scrolling through Instagram stories – overwhelmed!

The video has a lot of memes and Internet cultural references. Do you have a favourite meme or bit of the video?

My favourite thing about the video is the detail. I doubt anybody actually saw a lot of what that actually was. There’s a picture of Taylor Swift holding her Grammys on the desktop background which I was really insistent upon. There are loads of cat memes as well, and Kim Kardashian and Donald Trump memes – essential satire material. The thing I’m MOST proud of is the grey t-shirt I’m wearing at one point that says “mentally dating Jodie Comer” on it. She’s the psychopath in a show called Killing Eve – I love her.

The lyrics are quite deep, like “Death and guns and beating the gay kids up It doesn’t happen to you so why give a fuck” – what was the songwriting process like for ‘Internet Religion?’

Every song starts differently and the process of writing is slightly different every time. I think the first part of the song I wrote was actually that first verse that starts “death and guns and beating the gay kids up…” It started as a social commentary before it evolved into Internet Religion. I think I knew the song was going to be a good one when I finally wrote the chorus, which was probably about a month after the initial idea. I’m obsessed with the idea of having no throw-away lines. I hate place-holder lyrics. You only have 3 minutes to get your message across, so I think the words you choose to fill those 3 minutes with are incredibly important. 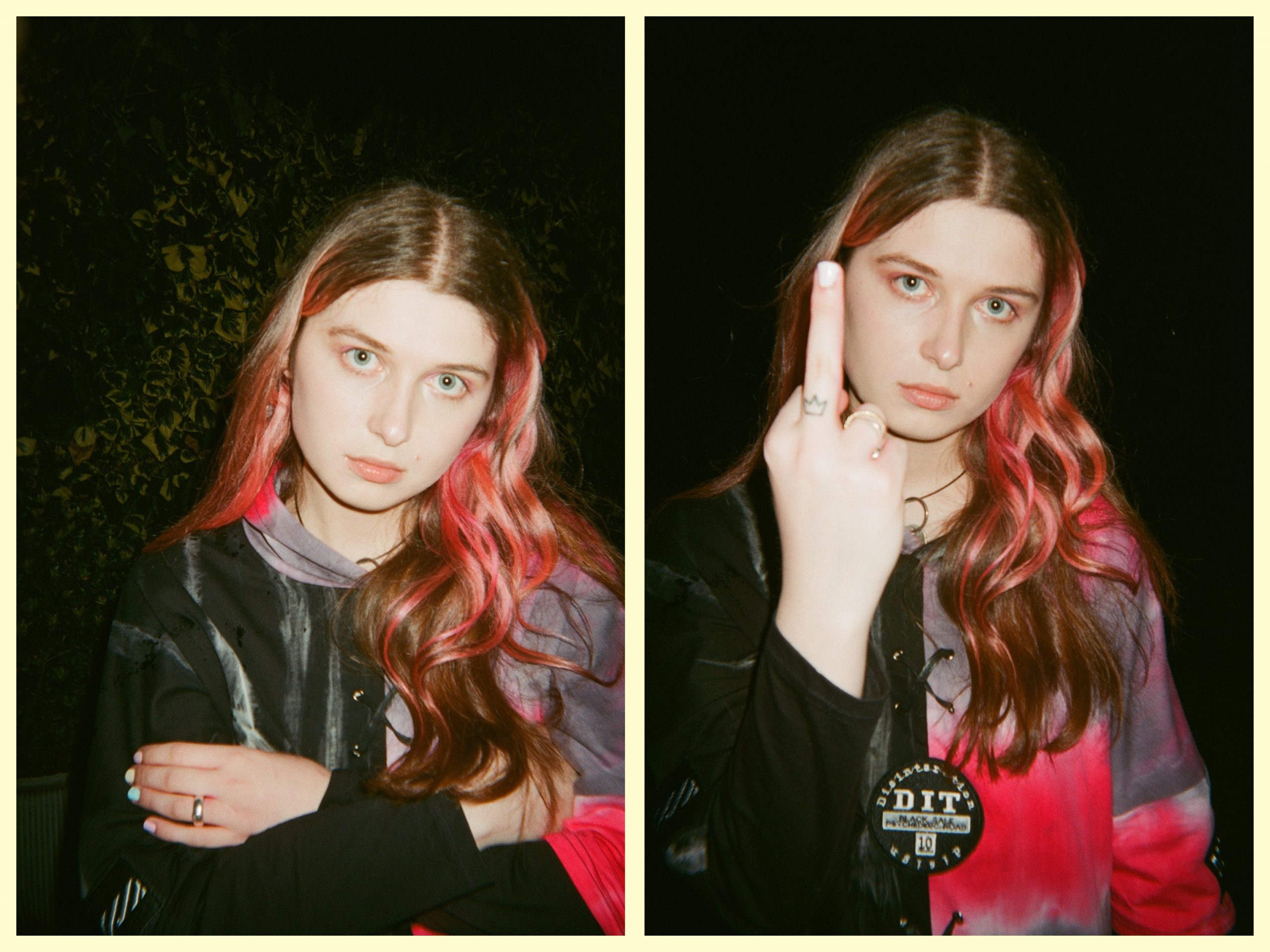 You grew up in South Africa and then moved to London as a teen. How have these two places influenced your music?

South Africa influenced my music indirectly. I think because I grew up feeling like I was so far away from the music industry, I looked at America as the pinnacle of what that was and used to sing in this awful version of an American accent. I listened to a lot of American artists. I was a huge Taylor Swift fan as a kid, and I think that really shaped my songwriting and the way that I structure the landscape of a song and develop the narrative. When I came to London, I became really obsessed with female artists like Kate Tempest and Little Simz, who are essentially poets. I think it’s why I’ve ended up in this space where the melodies are incredibly pop but the lyrics are complex and weighted.

How did you get interested in music? What made you want to be a musician?

The Grammys! I used to sit on the floor of my living room at 10 or 11 years old and watch them over and over again. I also used to watch the Taylor Swift Speak Now tour DVD on a little portable DVD player all night when my parents thought I was asleep. I was in awe of the way she could take her pain and turn it into something beautiful that allowed her to connect with people halfway across the world. There’s no point to pain if you can’t turn it into art. I needed purpose. I was like “I can do that! I can do this.” And it was almost like an immediate relentless decision I made when I was 11. It was just like “I’m doing this. Whatever it takes, I’m doing this.”

Your music is rooted in pop but has darker undertones. How would you describe your sound?

Anti-pop. That’s my favourite word to use. It’s intrinsically pop music but it’s also defiant of everything shitty bubblegum pop stands for. The A&R at my label said in a Zoom meeting the other day “pop music doesn’t have to be shit,” and it doesn’t! “Pop” is just short for popular, so by that definition, Fleetwood Mac could arguably have been called a pop band at the height of their success. I think another important thing for me to mention when describing my music is that it’s incredibly lyrically led and quite satirical. The lyric is everything. Everything else is second to the words.

How did you come up with the name Baby Queen?

I don’t even remember properly! I think I was writing a song about somebody that broke up with me in a notebook and I wrote “I’m your little Baby Queen,” and then I came across it months later. It was important to me that the name painted a colour. I think in colours a lot. I needed whatever I was going to call myself to be pale purple. It’s weird changing your name at first, but it has kind of become me now. There’s this confidence to Baby Queen that’s like “I’m the queen of everything,” but I’m also just a baby and so wildly immature.

I read that you’re a fan of Matt Healy and Little Simz. Who have you been listening to lately? Did any artist influence ‘Internet Religion?’

I love them both! I think lyrically when I discovered his band, Matty just really did it for me. It was just genius to me – the honesty, the rule-breaking, the poetry of it. Simz’ latest record “Grey Area” was my favourite record released in 2019. I just think the power of that album and the writing on it, is undeniable. I think it’s hard to say that any artist in particular inspired any specific song, but the way I write is definitely an amalgamation of everybody who taught me how to write, so there’s probably a lot of Taylor in everything as well.

This is your debut track, so what can people expect from you in the future and in your upcoming EP?

I am SO excited for the world to hear the music we have coming out this year. My biggest thing is never to write the same song twice. The internet song is sort of done now. I like to take an idea and explore it so deeply that there’s nothing left unsaid. This EP, and the music we have coming out in 2021, is just full of energy and opinion, and I like to think of it as some sort of immersive portrait or commentary of Gen Z. Everything feels important which feeds into this intrinsic desire I have to hold some kind of purpose, but I still feel like a kid. I think, somehow, I still write from a kid’s brain.

What happens when you visit Kokomo 30 years after The Beach Boys,...

The UK currently boasts an embarrassment of riches in the currency of...