The Ninth Wave: “Mental health is a thing that’s not talked about enough”

The Ninth Wave are one of the most exciting new artists in the UK right now. Having established themselves within Glasgow’s prolific alternative scene and released their debut album Infancy back in November 2019, the four-piece are back with an EP that sees them exploring a different approach to their trademark dark and powerful synth-pop. We spoke to frontman Haydn Park-Patterson about Happy Days!, out 31st July on Distiller Records.

In many ways, Happy Days! has all the hallmarks of a typical Ninth Wave record: Haydn’s emotionally raw vocals swim in a sea of thundering synths and atmospheric drums, evoking a gothic and intense feel that completely engulfs the listener; Millie Kidd’s harmonies add light and texture to each song; and the lyrical content is characteristically bleak. However, this EP is also noticeably different from the band’s earlier material, as it demonstrates a softer and more intimate side to their music. There is now more emphasis on the vocals than on their surrounding instrumentals, more passion packed into fewer layers of sound.

“Before, I would’ve danced around saying certain things”

Haydn explains that the EP’s roots were already growing during the recording of Infancy: “We’d discovered a lot of things through the process of making the album. We realized at the end of the recording that we have quite a big tendency to layer stuff up – and it worked for those songs to have a big wall of sound.” Interested in creating something more stripped back, The Ninth Wave began work on Happy Days!. “We thought, ‘let’s do the opposite of [Infancy] this time round’”, recalls Haydn. “There are some big bits on the EP, but there are also other moments where it’s literally just one of our voices and a piano or synth. There’s fucking acoustic guitar on it, which we’d never done before!”

From the candid song titles and heart-on-sleeve lyrics to the crisp production and minimalist use of instruments, Happy Days! feels more straightforward than anything The Ninth Wave have ever released before. This is partly due to Haydn’s love of writing poetry, something that formed the basis of some of these new songs and encouraged him to address difficult subjects. “Before, I would’ve danced around saying certain things, but the poetry I write is brutal in the sense that I don’t really hide anything. I don’t think my mum likes reading my poetry because it makes her a bit sad sometimes! I think that has translated into the songs, especially ‘And The Weight’.”

This EP sees The Ninth Wave discuss mental health in a refreshingly honest and open way, from Haydn confessing his unhealthy obsession with self-flagellation in ‘Come Down Forever’ to Millie laying all her vulnerabilities bare on the cinematic piano ballad ‘Abattoir’. “I’ve never really felt a duty to talk about [mental health]”, says Hadyn, “but it’s nice when something you’ve written can help someone. It’s a thing that’s not talked about enough and that affects us all, and it’s the main subject of all of our songs in some way.” 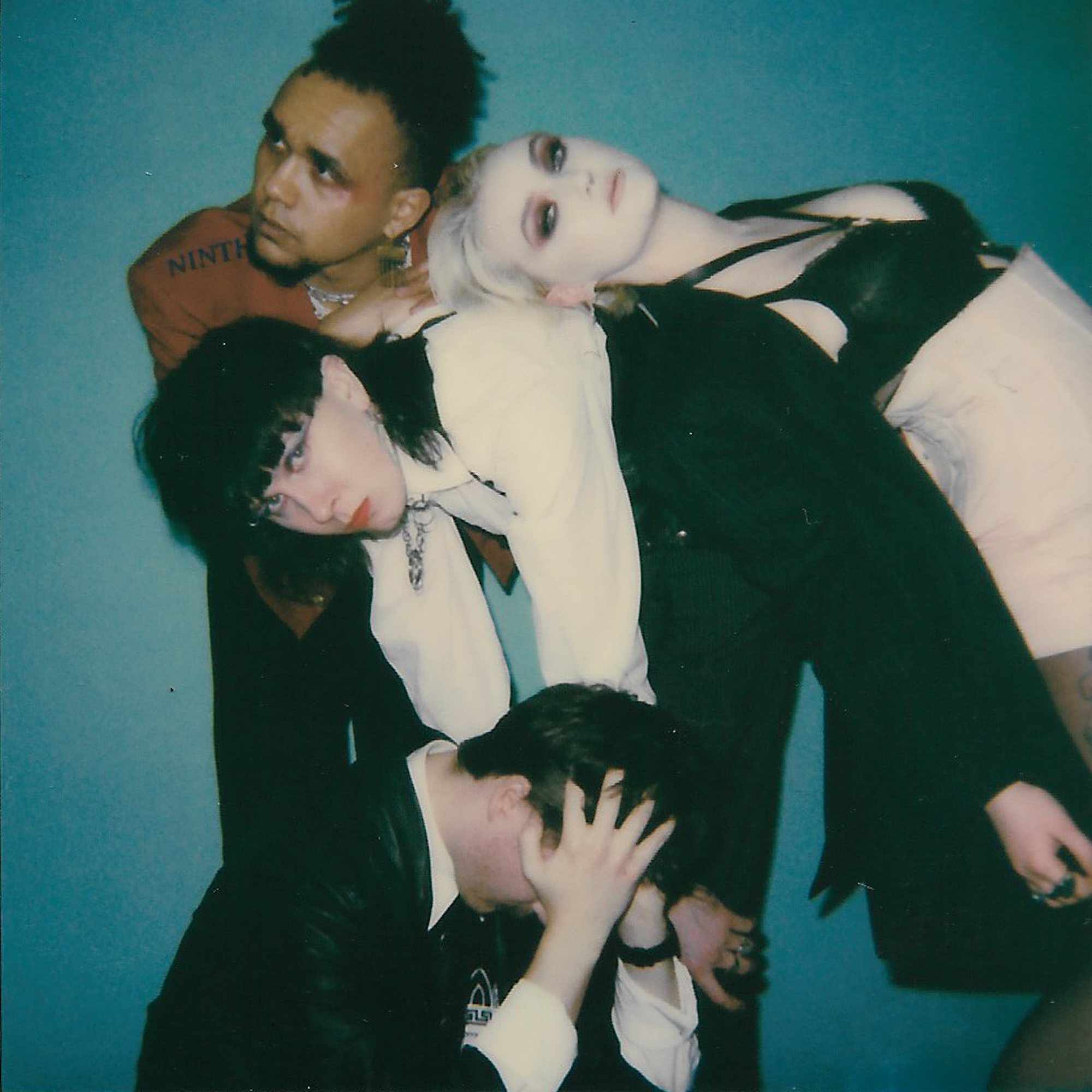 Happy Days! is The Ninth Wave at their most collaborative. Millie sings lead vocals on ‘Abattoir’, which she wrote last August, ‘I’m Only Going To Hurt You’ originated as Hadyn’s poem My Severed Heart, and the title track ‘Happy Days!’ was written by Calum. “We didn’t know we were going to write an EP”, Haydn tells me. “Calum had this demo and it ended up being [the track] ‘Happy Days!’. This became our touchstone – it was nothing like what we’d put out before, so we all had this buzz again about writing music.”

The band’s line up has become more concrete recently with the introduction of Kyalo Searle-Mbullu and Calum Stewart, both of whom help with the songwriting. In Hadyn’s view, this has made a significant difference to the Ninth Wave’s music: “Usually it would just be me and Millie, but the writing duties are now more spread out. It’s nice to know we can write together. We all have quite different tastes and I think that’s why this EP ended up the way it is. When the writing was just me and Millie, we hadn’t really found what our style should be. We question less now and just let things happen.”

The Ninth Wave seem altogether more confident on Happy Days!, with both Hadyn and Millie singing more comfortably in their natural Scottish accents, something that Haydn hadn’t noticed until Millie pointed it out. “It was Millie that said that it’s just been a confidence thing. It’s not that we didn’t sing with honesty before, but [we now sing with] just a bit more bluntness, and with that comes singing in the way that you say the words in your head.” But Haydn emphasizes that the band’s Scottishness is only one aspect of their identity: “It’s nice being from Scotland because we have such a rich history of music. But as soon as you play music in front of people, you forget where you’re from and you’re just there with people.”

Happy Days! serves as proof that The Ninth Wave are a band capable of evolving without sacrificing their musical identity. They don’t want to simply settle on the sound that they have previously presented to the world, they want to challenge it. “We’re just more open [now] to listening to new, weird stuff that’s going to influence us in different ways,” explains Haydn. “We’ve started caring less about ‘Oh, is this too much like this or that?’ We all have a different mindset than we did a year ago.” With this newfound sense of artistic liberation, The Ninth Wave have crafted an EP that has a burning energy running right through it – the sort of energy that only emanates from a band who are firmly in control of their vision.

The Ninth Waves’ Happy Days is released this Friday via Distiller records and is available to pre-save or pre-order now.