This is Big Jeff’s World… We Just Live In It

Having been the much-loved face of Bristol’s bustling live music scene for many years, Big Jeff spoke to us about life without gigs and his other passion, creating art. Big Jeff: Welcome To My World is a collection of 34 paintings which endeavour to surprise and challenge the viewer.

Jeffrey ‘Big Jeff’ Johns has spent the latest lockdown at his parents’ house in Plymouth. In an up and down year, the family dog Rosie, part Whippet, part Collie and part Irish Hound, “a proper mix” as Jeff describes her, has given him an incentive to leave the house. “Sometimes you need that thing to come up and go, oi, right, you’re going to focus on me now.”

Before Covid-19 shut down all cultural hubs, live music got Jeff out of his four walls. Chances are if you have been to a gig in Bristol over the past two decades, he was there too, throwing his coiled blond locks back and forth near the front, beating the air with forearms dressed in old festival wristbands as a tribute to his prolific gig going career. Often hot footing it between venues to see as many as three gigs a night, the 6ft 4” gentle giant has become an instantly recognisable firebrand of independent music.

Jeff has Asperger’s syndrome, which can make over sensory environments stressful, but the structure and routine of gigs helps ease his anxiety. Music venues have always felt like “huge safe spaces” to him, where he has matured and made lasting friendships with other punters and musicians, including The Charlatans frontman Tim Burgess, who took a shine to Jeff after watching him worm through people’s legs at a factory floor gig. “17-year-old me would be going, Tim Burgess wants to chat to me? Nah, never”.

With each Coronavirus wave, however, comes existential threat to the “controlled environments” that have facilitated positive change in his life.
“I’ve been really worried about the venues…It’s always been much more than just the music at a gig, it’s been everything around it. I’ve made all of my friendships through gig going really”. Gig spaces have formed the backbone of Jeff’s support system, giving him a sense of belonging in a community and places to seek refuge in challenging periods of his life. “Music has always allowed people like me to experience emotions and learn to understand them.”

Born in Milton Keynes, Jeff moved to Horsley in Gloucestershire aged five. Growing up, he was surrounded by music, especially on car journeys, which he relates most of his early experiences of music to, listening to everything from The Beatles, Annie Lennox, ACDC, ZZ Top, 1980’s hip hop mixtapes and Sweet Honey on the Rock. His mother was also a caller for a local ceilidh band.

But it was a chance encounter with Skunk Anansie at Ashton Court Festival in 1995 that ignited the burning passion for music he still holds today. “I didn’t think it at the time but that’s quite a revolutionary thing. There’s not many especially big sounding rock bands who are fronted by black bi-sexual female singers.”

Where he found obsession, he also found sanctuary. Music was a form of catharsis for Jeff in a particularly difficult period in his 20s, which saw him in intensive care and a three-day coma. Taking to the stage as his alternative rap split personality Manic F, he would improvise lyrics about “genuinely bleak stuff” that happened to him, “It was kinda like, here’s my therapy”. Other excursions into promotion and DJing followed, but he is best known as a punter. The Louisiana, one of his favourite venues, introduced a ‘Big Jeff approved’ stamp, and The Fleece painted his name on the stone slab he would always stand on.

His omniscient presence on Bristol’s music scene eventually generated interest from the local music press, something Jeff became aware of in the mid 00’s whilst he was studying at Access to Music, “It was probably just the fact I was going to so many shows”. Oliver Southgate, guitarist in punk band Heavy Lungs says, “Jeff really embodies the kind of gentle giant thing that really brings a warmth to an evening. Bumping into him is always a joy as he wears his music passions on his sleeve. If he’s at your gig, you’ve done something right!”

As his popularity grew, opportunities presented themselves. Jeff hosts ‘The Big Jeff Chat’ for Independent Venues Week, was due to speak at the cancelled SXSW in 2020, and was invited to spin records at Green Man Festival. As his confidence increased, his response to new opportunities that would once have seemed too daunting changed. “What have I got to lose? … It’s gone from, yeah maybe I can do this, to fuck it, let’s see if it floats.” 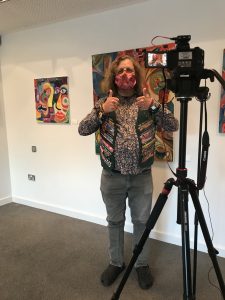 Testament to his newfound confidence, in February 2021, Jeff held a virtual exhibition of his vibrant artwork called Welcome to my World, showcasing paintings inspired by music and his mental health, “quite often people know me from the gig going world” he says, “people only know one side of the coin. It’s like picking up a single. Here’s the A side, now here’s the B side”. His exhibition was originally due to be held in late 2020 but was postponed and moved online due to Covid-19. “At the moment we can’t go and see it in its physical presence. What’s the next best thing we can do that can offer people hope? I know what, we’ll launch it online.”

Just like his exhibition, the gig world has gone virtual, leaving Jeff to get his musical kicks online through livestreams, “it’s not exactly the same as being there, but it’s how I’ve found so much new music”. Most important to him, however, are the resilient gig going communities where he has made all his friendships moving online too, offering each other “virtual hugs”.
One year of Covid-19 restrictions has left the venues inextricably bound to his identity and wellbeing in precarious positions, relying on crowdfunding to stay afloat for long stretches of 2020, “music venues have been really shafted by dodgy Covid deals. If we don’t have especially some of the grassroots venues, then how are we going to be able to encourage young people to take up the arts” says Jeff. “A lot of the smaller venues are more affordable. You can see something life changing for five or six quid sometimes.”

After being thrown out of structure for a year, Jeff is apprehensive about returning to the gig going world, “of course that’s going to affect confidence in terms of being around people. Knowing my addictive personality, I probably will start going straight away, but at the same time, I know there will be anxiety for the first few.”

As he signs off, Jeff tentatively holds crossed fingers aloft for June 21st, offering a hug in the flesh when this all blows over.